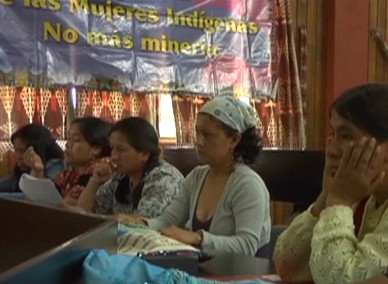 Interviews and excerpts from the first international conference of its kind in Latin America, “Women, Mining and Human Rights: Beyond the Challenge,” held in Guatemala City from March 14 to 17, 2010.

Organized by the London-based Charity LAMMP and the Union of Latin American Women (ULAM), a regional network of women affected by mining, this inspiring conference brought together rural and indigenous women, activists, NGOs, academics and others “to raise awareness about the impact of mining on women, identify the risks facing women environmental and human rights defenders, and explore the gap between corporate social responsibility policy and practice in the mining industry.”

As LAMMP describes on their website: “In Latin America, as in other regions of the developing world, mining is promoted as an economic activity with the potential to play a significant role in sustainable development and the fight against poverty. However, this position has failed take into account the specific concerns of women from mining-affected communities and address the impact of mining developments on rural and indigenous women.”

As well, even though women are at the forefront of mining opposition around the world, “[they are also] generally excluded from or less likely to benefit from compensation or economic opportunities associated with mining development. They are also more severely affected by and bear the greater burden of negative health, social and environmental impacts of the extractive industry. The environmental, social, cultural and economic changes brought about by mining developments are transforming women’s lives and demanding new roles for them.”

Appropriately, the international conference made room for everyone to explore what this transformation means, and more importantly, to begin building strategies “to stimulate, support and sustain women’s efforts to become agents of change, capable of influencing mining policy and development.”

Thanks to filmmakers Michael Watts and David McNulty, we can hear what these powerful women had to say and what they want to do for their Families, Communities, Nations and the Earth itself.

Learn more about the Conference:
http://www.lammp.org/our-work/international-conference/