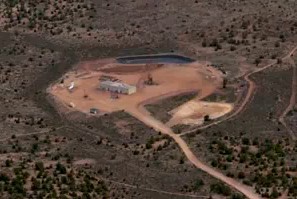 This bird’s eye view will give you an idea of what’s in store for the region and its watersheds that bring water to more than 25 million people.

It will also show you the “Arizona 1” uranium mine, which is by far the greatest threat to the health, cultural integrity, economic well-being and perhaps even the very existence of the Havasupai Peoples.

According to recent media reports, the Calgary-based company Denison Mines has re-opened the Arizona 1 mine “in defiance of legal challenges and a U.S. Government moratorium,” says Indigenous Activist and musician Klee Benally.

Benally explains that “U.S. Secretary of Interior Ken Salazar initially called for a two-year moratorium on new mining claims in a buffer zone of 1 million acres around Grand Canyon National Park, but the moratorium [didn’t] include existing claims such as Denison’s.” Nor did it address mining claims outside of the buffer zone.

Because of the recent increase in the price of uranium and the absurd push for nuclear power as a source of “green energy”, more than a thousand mining claims have been staked in the region. 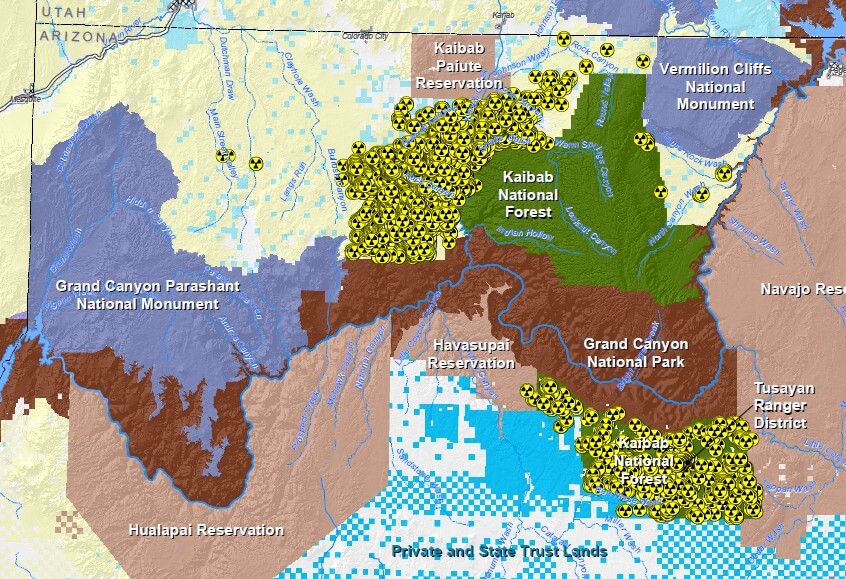 That said, it is important to note that the Grand Canyon isn’t simply a National Park or an “American Heritage site.” First and foremost, “The Grand Canyon is ancestral homeland to the Havasupai and Hualapai Nations,” says Benally.

Both Nations have formally banned uranium mining, perhaps the most barbaric of all mining practices, within their traditional territory. However “the U.S. Forest Service and Bureau of Land Management may still permit these claims” just as the Arizona 1 mine has been permitted, regardless of how it will impact the Havasupai’s culture and religious beliefs.

It’s well known that the Arizona 1 mine threatens a sacred Havasupai site known as “Wii’i gdwiisa” or “clenched-fist mountain.” More widely known as Red Butte, the Havasupai believe Wii’i gdwiisa to be the navel of Mother Earth, where “Mat Taav Tiivjundva”, a natural meadow some three miles north of Wii’i gdwiisa, is the abdomen.

The Havasupai say that uranium mining anywhere near these two sites will “destroy us and our world.”

Mining advocates will call it an irrational claim, but the fact remains: in addition to threatening both sites, along with the Havaupai’s cultural practices and cosmovision, the potential risk of radioactive contamination is as real as it gets.

As one article, published 8 years ago, notes, “all of the Canyon’s uranium mines are upstream of the Canyon floor [which] makes contamination by mining waste inevitable. A huge spill at Hack Canyon in 1984, when a summer flash flood washed four tons of high-grade uranium ore from a uranium tailings pile into Kanab Creek and on to the Colorado River in the Grand Canyon, has already demonstrated the devastating potential of uranium waste contamination. And a September 1990 major flood disaster, which nearly wiped out the village and farms of the Havasupai, has testified to the power of flood waters to carry water from mines on the Canyon’s rims to the floor below.”

The potential risk is simply too great to ignore: whether it’s to the Havasupai People, who literally live on the front line; or all those millions who depend on the grand canyon watershed.