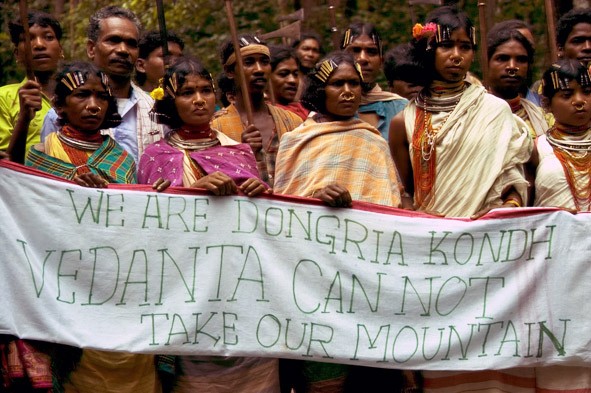 Dongria Kondh shocked over mine approval

The government of India has given the British mining company Vendata resources final approval for the controversial bauxite mine on the Niyamgiri Mountain of Orissa, India.

The Dongria Kondh were shocked to learn this on Friday, after receiving a phone call from the UK charity group ActionAid. It was the first time they heard of the decision.

“It has happened in a very underhanded way,” says Kumti Majhi, a leader for the Kondh.

Simply put, “this ruling will mean the complete destruction of the tribal groups – there’s no doubt about it”, says Babu Mathew, ActionAid’s director in India.

However, there is still some hope, following yesterday’s election results, that the project will tossed aside, or at least put on hold.

“The newly elected candidates canvassed on the fact that they would help the tribal people,” Mathew adds: “so we will try and get them to keep their word.”

One way or another, the Dongria Kondh will never back down from their efforts. That much is certain.

For the past year they’ve staged numerous protests against Vedanta, continuously stating that they will do everything in their power to make sure the company never sets foot on the Mountain.

1. Sign a petition, “Save Niyamgiri Mountain and its Tribal Community from DevastatioN”

2. Send an email to Vedanta demanding they uphold their promise. During last year’s Annual General Meeting (AGM) in London, the company’s CEO said they not proceed with the mine without the tribe’s consent.