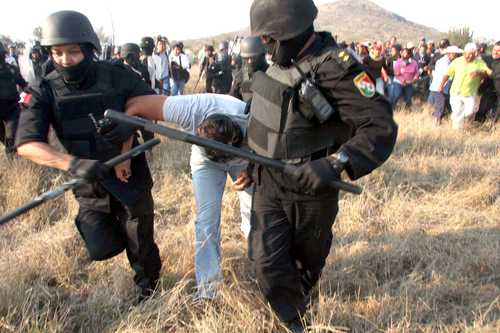 Violent eviction of Community blockade near Trinidad Mine

On the morning of May 6, 2009, a mass of federal and state police troopers brought a violent end to a community blockade near Canadian-owned Fortuna’s Trinidad Silver Mine in the municipality of San Jose Progreso, Oaxaca, Mexico.

An urgent action alert issued by Comité de Defensa de Los Derechos del Pueblo (CODEP) describes how “twenty-five hundred (2500) members of the federal police, AFI, judicial police, and the bomb corps entered the mine with a wealth of weapons: using tear gas, shots from various types of firearms, police dogs, savagely beating the people, and searching the homes of the people who were peacefully guarding access to the mine.”

Reporting on the Dominion, Komala Ramachandra adds that, “during the raid, police began arbitrarily entering and searching homes, as well as confiscating personal possessions in the community of Magdalena, and in the municipality San José del Progreso.” They also set up a cordon around 3 other communities, and were “arresting people randomly on the streets.”

As many as 28 people were detained in total—and at least two people, “likely several more”, are currently missing.

In defense of the Environment

The community blockade was initially set up on March 16, 2009. Two days earlier, “600 people affected by the Canadian mining companies Fortuna Silver Inc. and Continuum Resources Ltd. by way of their Mexican subsidiary Compañía Minera Cuzcatlán, decided to organize themselves to stop the advance of these mining projects,” says the International solidarity group SIPAZ.

“These companies cover 54,000 hectares in the town of San Jerónimo Taviche, municipality of Ocotlán. In an assembly [local communities] asked for the support of their representatives ‘to protect their territory’, a request which was denied by the municipal president. Faced with this, the decision to close ‘the mine, in an orderly and peaceful manner’ … by way of a roadblock… Since March 20, they denounced that the roadblock has been constantly threatened by members of the Secretary of Public Security, the Secretary of National Defense, and the State Police in various police and military operations.”

A major concern for the communities is the environmental impact of the mines. “All the water is contaminated with different heavy metals and it’s coming up to contaminate soil on the surface,” says one local farmer.

An independent study by Sanica confirms “the presence of cyanide, mercury, arsenic, and lead contamination in the local water supplies, all “stemming from activities at Trinidad and other local mines,” says Ramachandra.

These contaminants have resulted in the deaths of at least twenty heads of cattle over the past three months. If nothing’s done to rid the water of contaminants and prevent any further accumulation, then it’s only a matter of time before the local communities start getting sick—and even worse, start to die.

What you can Do

Send a letter, or a version of this one, to YOUR OWN politicians and media, as well as the people listed below.

To Whom It May Concern:

We have learned that the government of Mexico has unleashed repression against the indigenous communities of San José del Progreso and Magdalena Ocotlán, for defending their environment and natural resources, and for opposing the establishment of a gold and silver mine by the Canadian company Fortuna Silver Mines Inc.

• A stop to the repression and violation of the human rights being committed by the national and state governments.
• Immediate freedom for the political prisoners from the communities of the Valley of Ocotlán and of the state of Oaxaca.
• Immediate suspension of these mining licences and the cancellation of all mining that poisons the water and destroy the environment

What is the position of the governments of Canada and Mexico with respect to this repression in support of a Canadian mining company?

We hope for a positive resolution of this conflict and look forward to hearing back from you.