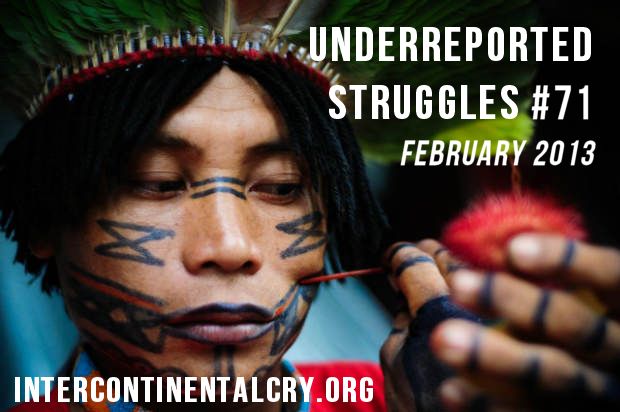 Citizens of the Mi’kmaq Nation denounced the “Made in Nova Scotia” Process and the “Made in New Brunswick” Process, two framework agreements that are being carried forward under the premise of economic opportunity. Idle No More organizer Shelley Young, a citizen of Eskasoni First Nation, commented, “The framework agreements promise economic opportunity for a select group of Mi’kmaq people at the price of all Mi’kmaq peoples inherent treaties… We have a voice and we say “NO!” Drastic measures have been implemented with the declaration of a hunger strike by a Mi’kmaq citizens assembly comprised of members from each province.

India’s central government walked away from its position on the need to obtain consent from Indigenous peoples and forest dwellers before handing their lands over to industry. The government simply announced that major “linear projects” such as roads, railways, transmission lines and pipelines do not need to obtain consent from affected populations before clearing their lands, despite provisions in the Forest Rights Act that say otherwise. The move could make way for hundreds of new industrial projects that would have never otherwise seen the light of day.

Maya villagers who are suing HudBay Minerals–for the alleged gang-rapes of eleven women, the killing of community leader Adolfo Ich and the shooting and paralyzing of German Chub at HudBay’s former mining project in Guatemala–recently learned that HudBay has abruptly abandoned its legal argument that the lawsuit should not be heard in Canada. The surprise move is an important precedent-setting development for the accountability of Canadian mining companies for overseas human rights abuses.

Hickory Ground Tribal Town member, Wayland Gray, Muscogee-Creek, was arrested and charged with making a terrorist threat for entering the construction site of the expansion of the Wind Creek Wetumpka Casino. Wayland, who was arrested with three others, entered the site to pray over the desecration of the grounds because it is where 57 ancestral remains were unceremoniously moved to make room for the casino expansion. Wayland has since been released form jail, however, the charge of uttering a terrorist threat remains.

Australia’s Federal Court affirmed that Fortescue Metals Group has an obligation to negotiate with the Yindjibarndi Peoples on matters concerning Yindjibarndi Country. The Mining company has continuously dismissed and attempted to undermine the credibility of the Yindjibarndi, even going so far as to manufacture consent for their Firetail mine by creating and funding a fake Yindjibarndi representative organization. The company have also surreptitiously destroyed Yindjibarndi sacred sites.

In an “unprecedented” ruling, all mining and exploration activities in 49,421 acres of territory belonging to indigenous Embera Katio communities were suspended for up to six months due to a failure to consult and protect the communities in the area. According to the presiding Judge, the six month period will give
the Embera some desperately needed security after being repeatedly attacked by outsiders, employees of the mining companies in the area. The six month term will also give the courts enough time to determine the legality of the Embera’s land titles.

B’laan communities affected by the SMI-Xstrata Tampakan Copper-Gold Mining Project and their support groups called for a high level investigation by the Armed Forces of the Philippines and the Commission on Human Rights on the escalating tension and violence in South Cotabato. The request arrived just two weeks after two B’laan clan members were killed in an alleged military operation; and three months after the massacre of an entire B’laan family.

France continued to steam roll ahead with its invasion of Azawad, Tuareg traditional territory in North Africa, killing hundreds of Indigenous freedom fighters in the process. The international media, meanwhile, continued to buy into the claim that the invasion is an heroic charge against terrorists, when it is, in fact, little more than an attempt to secure mineral resources that have yet to be exploited.

The Wixárika Regional Council for the Defense of Wirikuta announced a new stage in the struggle to defend the sacred land known as Wirikuta in San Luis Potosí, Mexico. At the center of the new effort is a set of dialogues with Wirikuta residents, scientists and the federal government; and a demand for a new plan for regional economic recovery, based on respect for human and territorial rights of the people of the desert and the Wixárika people.

Brazil’s Federal Public Ministry (MPF) rejected Belo Sun Mining Corporation’s proposed “Volta Grande” gold mining project downstream of the controversial Belo Monte dam in Para, Brazil. The end result of a five-month investigation into the project’s environmental impacts, the MPF stated that Belo Sun did not prepare adequate socio-environmental impact studies and further failed to consult indigenous communities that may be affected by the project. Both the government and the company previously ignored the Indigenous Peoples’ concerned.

A Malaysian state minister announced that the government will no longer pursue a set of twelve new hydro dams in Sarawak The Minister stated unequivocally that the government was backing off in response to widespread criticism, which has included several protests over the years by the Indigenous Peoples of Sarawak as well as environmentalists.

Approximately 450 Ch’ol women and men initiated a highway blockade to demonstrate that nearly two months into the administration of the new state government, “the communities and peoples continue to experience abandonment, misery, and looting.” They also denounced the government’s “National Crusade against hunger” as “a farce that seeks merely to share crumbs to our communities that experience poverty, while our natural resources are handed over to foreign firms for exploitation.”

Traditional Maya leaders in Belize reported that Texas-based US Capital Energy made numerous attempts to buy support for their oil drilling project on Maya lands including those inside the Sarstoon-Temash National Park in Southern Belize by infiltrating the Maya leaders’ traditional forms of governance. They declared that the company is blatantly undermining and disrespecting Indigenous governance, in violation of the UN Declaration on the Rights of Indigenous Peoples.

The Canadian government announced that it will appeal a landmark court decision that recognized Metis and non-status peoples as “Indians” under the constitution, a decision that almost doubled the population in Canada. Former Aboriginal Affairs Minister John Duncan said in a statement that the feds are appealing the court decision, issued during the height of the Idle No More Protests in January, because it raises “complex legal issues” (Editor’s note: They’re having a hard enough time as it is legally extinguishing the current population).

Indigenous leaders from the Ecuadorian Amazon challenged the Ecuadorian government face-to-face during the XI Round oil concession promotional activities around the North America Prospect Expo (NAPE), the oil prospecting industry’s semi-annual trade show. The leaders were joined by North American indigenous leaders and human rights groups in a collective effort to raise attention and call on the Ecuadorian government to suspend its tendering of oil concessions that threaten to devastate the rainforest and the native communities that live there.

Indigenous peoples on the Isthmus of Tehuantepec resisted a new police offensive meant to impose the construction of a mega wind park project in the Barra de Santa Teresa of San Dionisio del Mar, Oaxaca, Mexico. This wind park, the largest in Latin America, would completely do away with the habitat, natural resources and food supplies of the fishing and farming families of the Barra and would also destroy their sacred sites. Moreover, the project is a direct violation of their human rights as Indigenous Peoples.

Mapuche leaders and organizations in Chile rejected the government’s announcement of a plan to implement three bills meant to promote the development and political participation of the Mapuche people in the country. The Mapuche said the legislation was being imposed unilaterally and that the government was ignoring the recommendations established at a recent Mapuche summit. They are demanding a proper dialogue with government.

Ndima: Saving the Congo Basin Forests – The Bayaka, Indigenous Peoples commonly referred to as pygmies, now work to protect “the second lung of the world”, their home, the forests of the Congo Basin.