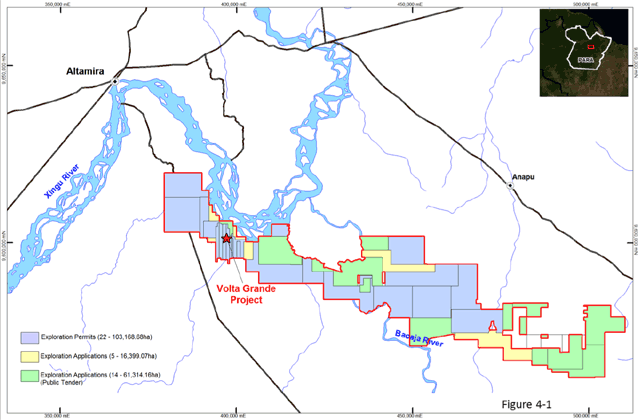 Last week, the MPF completed a five-month investigation into the Volta Grande project’s environmental impacts, concluding that Belo Sun did not prepare adequate socio-environmental impact studies and further failed to consult indigenous communities that may be affected by the project. The announcement sent a shock wave through the company, causing a 7.5% drop on the Toronto stock exchange.

The company, which is owned by Toronto-based Forbes & Manhattan, applied for an environmental license in March 2012. In familiar fashion, the company also tried to ‘sell’ the mining operation to the public as “a panacea for local development with investments in infrastructure, education, and health… while fostering an egalitarian and sustainable quality of life”, notes a 2012 article by Christian Poirier.

The irony of course, is that the company did not consult the Arara, Juruna and Kayapo Xikrin, who live just outside the concession area. In fact, the company’s Environmental Impact Assessment didn’t even so much as mention the Indigenous Peoples.

Going back even further, Rebecaa Sommer of Earth Peoples reports that, in 2010, she learned about a set of maps from the Brazilian Ministry of Mines and Energy that showed an entire spread of mining projects within the proposed Belo Monte hydro dam area. “The entire area was targeted by mining interests. One of the mining companies that seemed to be in the forefront was Belo Sun, which had launched a large diamond drill program in mid 2010 in order to move the Volta Grande Project, with the aim of expanding it (In October 2012, Belo Sun had drilled up to 193,000 metros),” Rebecaa Sommer comments.

“I was alarmed and in disbelief when I saw on the maps a grid work of numbers in indigenous reservations (TI). Each number was an application for a license – a license to study, to research, or the final license to extract and explore minerals, because the two prior steps had already been approved by the Ministry for Mining and Energy, and concluded by the companies,” she continues.

“I doubted that this was done with the consent and knowledge of the indigenous peoples, and reached out to all of the indigenous communities to inform them about the situation, and to find out if they knew about it. I also informed the local FUNAI and mailed them the evidence.

“The indigenous community leaders informed me that they had no idea that mining companies had done research and studies on their indigenous territory, nor that the Ministry of Mines and Energy had approved such actions by giving these companies the licenses for it.

As a result, Rebecaa Sommer and Telma Monteiro, the researcher that first obtained the maps filed a complaint at the Federal Public Ministry (MPF). “We included the alarming situation, that groups of indigenous peoples that are in voluntary isolation live even closer to the area of the planned dam site (and planned mining projects) than the indigenous peoples Arara, Juruna and Xikrin that have land set aside for them in form of legally recognized indigenous reservations. I also submitted to the MPF some videos that I had recorded to provide eyewitness accounts and evidence from indigenous peoples about the whereabouts of the groups living in voluntary isolation and that are hiding and running from any contact. (Videos can be seen on sommerfilms youtube channel).”

“The population of the Xingu’s Big Bend is already living with uncertainties caused by the reduced flow of the river, resulting from the construction of Belo Monte. They should not have to live with the installation of a large mine and with the imminent risk of accidents that further pollute an already weakened environment,” says Biviany Rojas, an attorney at the Socio-Environmental Institute (ISA), a Brazilian NGO that provided key analysis of the Volta Grande project to MPF. Continues Rojas, “What type of extreme situation is the Brazilian State willing to impose upon the indigenous and riverine people of the Xingu in exchange for energy and gold for private companies?”

Unfortunately, when it comes to the federal government, the answer is clear: Brazil is currently attempting to open all Indigenous land to the extractive industry and the military. On July 17, 2012, the Office of the Solicitor-General (AGU) announced “Decree 303“, a law that would, in no uncertain terms:

The government withdrew the so-called “anti-indian” decree just a few hours after it became law–the result of a quickly organized strategic mobilization. However, it was understood that the government had no real intention of shelving the decree, which would give them access to untold riches across the country, and guarantee that projects like the Volta Grande could proceed with any consultation or acknowledgement of local populations. Fortunately, the Indigenous Peoples of Brazil are no pushovers when it comes to protecting their lands and rights.

While the struggle against Decree 303 continues, the MPF has sent a clear message that is mindful of international legal standards including ILO Convention 169 and the United Nations Declaration on the Rights of Indigenous Peoples: foreign companies and investors don’t get to ignore Indigenous Peoples when they see fit. If they do, there are consequences.