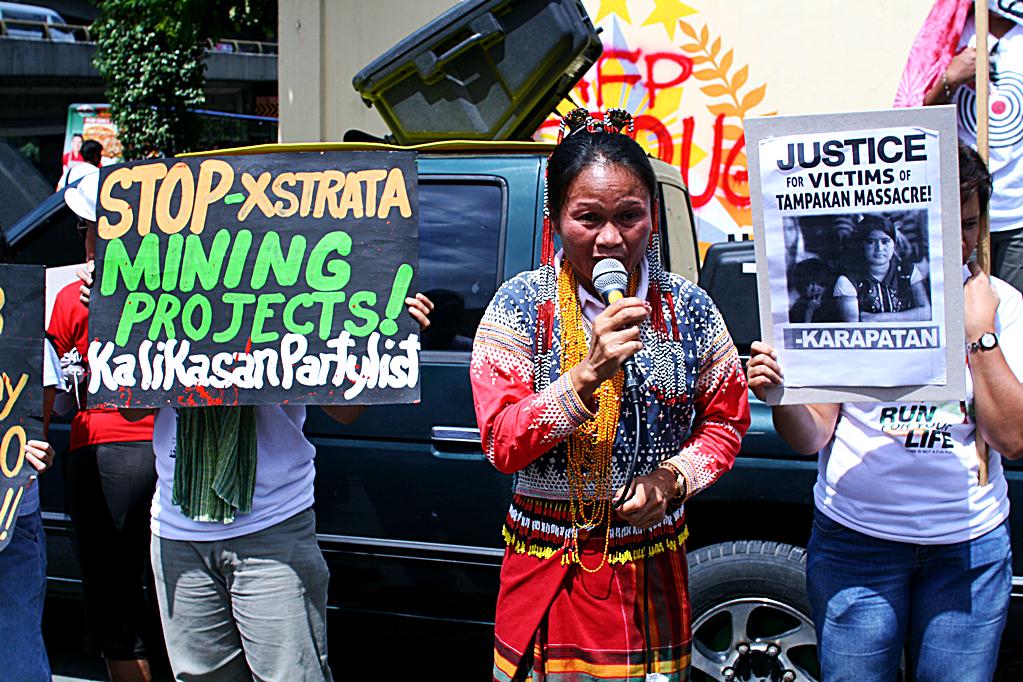 Tribal communities affected by the SMI-Xstrata Tampakan Copper-Gold Mining Project and their support groups are calling for a high level investigation by the Armed Forces of the Philippines and the Commission on Human Rights on the escalating tension and violence in the area, military presence and unstable peace and order situation in the mining-affected communities in South Cotabato.

Only three months after the massacre of the B’laan family composed of Juvy Capion, 27 and two of her sons Jordan, 13 and John, 8 last October 18, another alleged encounter was reported killing B’laan clan members, Kitari and Diyo Capion.

According to reports gathered by the Social Action Center of the Diocese of Marbel (SAC-Marbel), on January 29, Kitari was going to Sitio Bong Mal when he saw military men identified as members of Task Force Kitaco. Fearing for the safety of his family, he ran back to his home in Nakultana and told his wife and children to leave and stay at their relatives’ place. Thereafter, an encounter took place. Kitari was shot twice.

He was brought to the Allah Valley Hospital in Koronadal City where he underwent operations from the sustained gunshot wounds, but after two hours was declared dead. The family together with SAC-Marbel immediately claimed his body.

January 31, Kitari’s remains were to be buried in Nakultana when another shoot-out between armed men took place in Bong Mal. A relative of Capions was wounded in that encounter and brought to Kiblawan for medication.

Juvy, Kitari and Diyo are related to Daguil Capion, a tribal defense warrior opposing the entry of mining companies in their ancestral domains. After the killing of his wife Juvy and their children, Kiblawan Mayor Marivic Diamante announced a reward for his captivity—dead or alive. (Reported by Inquirer Mindanao, 20 October 2012)

Peace situation and militarization in Tampakan

Communities and their support groups fear that the increasing presence of militias as investment defense forces is due to the entry of SMI-Xstrata in pursuit of the Tampakan mining project.

A pre-requisite before actual operations is the free, prior and informed consent (FPIC) of indigenous communities who will be affected by the development project. In this case, B’laans and other tribes have not issued their approval/FPIC for the project that will take their ancestral lands from them. It is believed that the presence of the military has increased tensions in the area since the indigenous communities are preventing the mining company from conducting any activity, due to this lack of FPIC.

A postponed high-level investigation by the Commission on Human Rights and the Philippine Army is still awaited by the communities and support groups there.

Fr. Joy Peliño, SAC-Marbel Coordinator said: “We condemn this tragic incident even the killings on both sides of indigenous peoples and militaries. This is too much already for the communities that is why we are calling on the President to command the government agencies to investigate and resolve this situation.

We need the intervention of the Commission on Human Rights, together with the National Commission on Indigenous Peoples, the Philippine Army and the Philippine National Police in the Region, to investigate the situation in the mountains. We are aware that there is increasing deployment of military forces and the area, but we believe that there is no concrete reason for them being there other than looking after the mine area thereby threatening the rights of indigenous communities there.”

During a dialogue in the presence of Bp. Gutierrez, Gen. Bernardo, Col. Flores and Lt. Col. Imperial, and the representative from the Bong Mal communities last February 3 the military assured the communities that they can go back to their place safely. Military officials also promised that more restrictions would be ordered against Col. Bravo and that a court martial will proceed in two weeks time.

Another agreement was that space would be granted to the Fulong in Bong Mal to discuss and decide what is best for their communities given the current realities, and to know more who Daguil Capion is and so as not to be labeled simply as a bandit but someone who defends their ancestral land.

“I believe this threat alerts the communities and pushes them to fight against the military for fear of their life and to defend their ancestral land,” Peliño added.

Meanwhile, Rep. Teddy Brawner Baguilat, chairman of the committee on national cultural communities has scheduled a Congressional Hearing to be held in General Santos to hear from the community leaders themselves their problems concerning human rights and extra judicial killings.

Baguilat said: “I condemn the killing of my IP brothers and sisters and the continued threat of violations against them. In our planned Congressional Inquiry this coming Feb 21, my colleagues in Congress and I will study the different cases and put forward concrete actions to the government offices.”

Peliño concluded: “We look forward to the Congressional Inquiry this February but we also want immediate actions. We strongly call on PNoy to carefully examine whose interest is promoted and protected here but with a clear bias to the least—especially of the IP communities, not just the foreign investment and to command the pull out of military deployment in the area or at the minimum order the cessation of all military activities and violence in areas affected by the Tampakan mining project. Thus allowing the spaces for the Fulong and Bong Fulong. We rather their fundamental rights as guaranteed by the Constitution for self-determination and right to defend their ancestral land.”