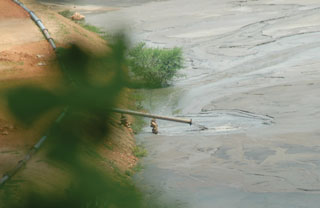 Uranium Waste flowing into a pond that lies dangerously close to villages in Jharkhand, India. Photo: tehelka.com
Support our journalism. Become a Patron!

In this month’s Underreported Struggles: 20 thousand peasants mobilize for agrarian reform in Indonesia; Indigenous Peoples from Brazil, Peru and Bolivia declare a “state of emergency”; Uranium mines in Jharkhand exposed: Villagers are still being poisoned.

A military plane was reportedly sent to Rapanui (Easter Isalnd) “with a contingency of SWAT teams to augment the already in-place armed forces set to remove indigenous Rapanui people from their ancestral lands.” Since July 31, the Rapanui have been non-violently occupying parts of their ancestral land, illegally taken from their grandparents. Throughout the effort, the Rapanui have been asking for the restoration of their legal title to the land.

The Liard First Nation (LFN) expressed concerns over massive zinc mine project that could severely impact Don Creek, a stream that eventually flows into the Yukon River in northwestern Canada. The Yukon government recently approved the project; however, according to LFN, they “forgot” to explore the potential impacts on the water system before the decision. That is, despite knowing that he companies behind the project are going to dump their mine waste right into the Creek.

The Navajo Nation Council took a welcomed step back from the Northeastern Arizona Indian Water Rights Settlement Agreement (NAIWRSA) to devote a little more time to “community outreach”. Just prior to the Council’s decision, more than 160 concerned Navajo (Dine’) urge them to oppose the agreement, which would force the Dine’ to forfeit their “priority rights to all waters that fall on, run by or through, or are under the land surface between the Four Sacred Mountains.”

As many as 20 thousand peasants mobilized to demand agrarian reform in Indonesia. The action, which involved more than 40 organizations, marked the 50th commemoration of the National Farmers’ Day in Indonesia.

The Inter-American Court of Human Rights ruled that the Xakmok Kasek community in Paraguay should be allowed to live on its traditional land. “The community, which comprises around 60 families, has been denied access to the land for over 20 years and deprived of its traditional means of subsistence: hunting, fishing and gathering,” explains Amnesty International.

The Fourth Tri-national Encuentro of Indigenous Peoples concluded with Indigenous organizations from Peru, Brazil and Bolivia declaring a “state of emergency” throughout the Amazon rainforest due to the “intense promotion, approval and execution of mega-projects by the governments of the three countries.” The event brought together more than a hundred indigenous leaders from AIDESEP, ORAU and FENAMAD in Peru, CIPOAP and CIMAP in Bolivia and COIAB in Brazil.

Villagers in Jharkhand, India are being actively exposed to uranium, according to a recent investigation by Tehelka Magazine. At just one of the seven uranium mines in Jharkhand, says Tehelka, “there are no prohibitory signs, no warnings about radiation, no barbed wire and no demarcation of territory.” What’s more, several workers were dressed in casual clothing, with no helmets or even a breathing mask. And children were found bathing in a stream that obviously receives radioactive waste water.

Autonomous Authorities ordered the total evacuation of San Juan Copala in Oaxaca, Mexico, after paramilitaries raided the community and said they would kill everyone if they didn’t leave. According to latest reports, all residents of the autonomous municipality made it out safely, “with no help from the government.”

“In an effort to reclaim a day that has traditionally been imposed as ‘Columbus Day,’ indigenous peoples around the world have called for a global mobilization ‘in defence of Mother Earth’. Climate Justice Action has taken up this call and is proposing a global day of direct action for climate justice on the same day, October 12, 2010. CJA is not picking specific targets or actions, but is rather calling for all of us to engage, plan and take direct action on this day.”

Alberto Pizango, the respected and well-known Indigenous leader in Peru, announced that he will be runnning for President in the upcoming 2011 elections. “The candidacy of Pizango has been speculated for months, and he accepted to run after the Apus (leaders) of more than 1,300 Native communities supported his candidacy,” reports Peruanista. “His candidacy could be a rising surprise in these elections, even after the media in Lima has portrayed him as a ‘social agitator’ and a violent man who is financed by foreign groups.”

The Armed Forces of the Philippines (AFP) announced plans to give mining firms in Palawan, including some Canadian companies, direct military support in exchange for access to military technologies. The shocking news came just days before the Philippines’ Department of Environment and Natural Resources (DENR) illegally granted MacroAsia Corporation (MAC) an Environmental Clearance Certificate (ECC) for the mining plans in the Municipality of Brookes’ Point.

More than six dozen Indigenous people from the Guarani Kaiowa Y’poi in Brazil have been effectively turned into prisoners on their land. According to the Indigenist Missionary Council (CIMI), six weeks ago a group of hired gunmen surrounded the Guarani, who set up a camp in April on a section of their ancestral land. Since then, the Guarani have been unable to leave the camp, severely limiting their access to food, water, education and health services.

In the Sarawak region of Borneo, more than 150 Penan started blocking roads to protest the ongoing destruction of the rainforest and the Malaysian government’s failure to protect their land and their rights. According to Survival International, “The protesters were marking the anniversary of previous road blockades a year ago, which brought the logging industry in the area to a halt. ” Not long after the blockades went up, the police arrived to tear them down.

Indigenous landowners in Western Australia (WA) expressed outrage at the government’s plan to “compulsorily acquire” a section of their land for a $30 billion gas processing plant. WA Premier Colin Barnett announced the plan after deciding, on his own, that negotiations with the landowners had failed. According to GetUp! the Oil and gas giant Woodside (along with joint venture partners Shell, Chevron, BHP-Billiton and BP) wants the land to process the huge gas deposits at Browse Basin.

Indigenous Peoples in Botswana filed an appeal to overturn a High Court decision that denied them access to a single waterhole on their traditional territory. The Kgeikani Kweni–more commonly known as the Kalahari Bushmen–have been struggling to access the waterhole since 2002. They now have to truck in water from a settlement 300 miles away. Meanwhile, just a few miles away, a tourist resort and a diamond mine enjoys near-unlimited access to water.

On Defending Sacred Sites – Cihuapilli Rose Amador talks with activist Wounded Knee De Ocampo and Native Voice TV, still photographer,Cipactzin David Romero about the desecration of sacred sites on Turtle Island and the importance of standing up to defend them.

Bety Cariño Speaking at the Frontline Defenders Conference – A powerful and moving speech by Bety Cariño, recorded two months before she died at the hands of the pro-Mexican government paramilitary group, UBISORT