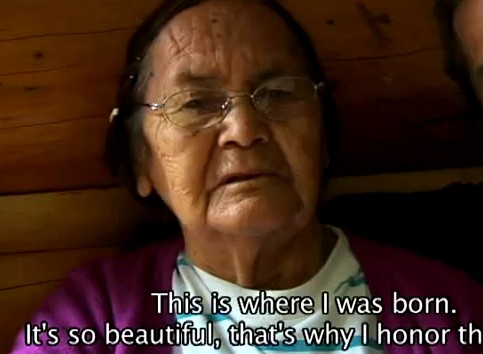 Xeni Gwit’in elder, Mabel Solomon, speaks out against the destruction of pristine Fish Lake on her people’s ancestral lands.

Any time now the Harper government will announce its decision on one of the most contentious mining projects in North America, Taseko’s ‘Prosperity Mine’.

As you’ve probably heard by now, the Vancouver-based company wants to empty out an entire lake, Fish lake on the traditional territory of the Tsilhqot’in Nation, so they can use it as a permanent storage site for their mine waste rock.

Taesko, along with some government officials have claimed that ‘converting’ the lake is an environmentally smart move because the sediment at the bottom of Fish lake is more secure than anything they can create on their own. This means there’s less of a chance that any toxins will be able to make their way into the environment.

It definitely sounds good, in theory. But if we look at the overall impacts of the mining project, that talking point quickly turns into a bad joke, like a claim that we should “burn down a forest to save it from being infested.”

First and foremost, Fish Lake is heavily populated with a unique species of Rainbow Trout. For generations those Trout have been a valued source of food for the Tsilhqot’in Nation. They still eat them to this day. However, the company dismisses this; and without consulting the Tsilqot’in, they’re planning to move the Trout to an artificial lake that won’t even be able to sustain the existing population.

The Tsilhqot’in also regard the lake, what they call “Tetzan Biny” as a place of worship and a place to teach their children.

There are several other problems with the proposed mine, as the Federal Review panel brought up earlier this year. But at this point it’s enough to say that, if the company gets its way, the Tsilhqot’in Nation will be literally robbed of their cultural, religious and economic wealth at Tetzan Biny. In the name of “prosperity”.

According to the Council of Canadians, five other lakes in Canada have already been approved for “conversion” from pristine lake to tailings impoundment area. And there are another thirteen lakes on the horizon including Fish Lake, Sandy Pond near Long Harbour, N.L, and Bamboos lake near Marathon, Ontario.

There’s no telling how many more lakes will be marked for destruction in the coming years. There could be dozens more, if we don’t work together now to protect what’s left of pristine Canada.

If we don’t, than the companies and the government will just keep pushing on, doing absolutely anything they want, regardless of the consequences.