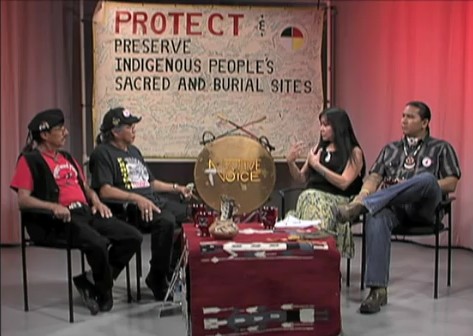 Cihuapilli Rose Amador talks with activist Wounded Knee De Ocampo and Native Voice TV, still photographer,Cipactzin David Romero about the desecration of sacred sites on Turtle Island and the importance of standing up to defend them.

There is an alarming number of sacred sites in danger of being desecrated or destroyed throughout the United States and Canada today. Among them:

As long as corporations and governments are allowed to violate our basic rights and do whatever they want on our lands without our consent, this list of sacred sites can only grow longer. And then it’s only a matter of time before they’re simply gone. One by one, they will be desecrated, plowed over, dumped on, blown out and converted into picnic areas and other useless things that nobody cares about.

We have to protect these sacred sites. And, as Wounded Knee says in this video, we have to come together to do it. Even if we believe in all these paper-thin jurisdictions; because, in the end, we are all Onkwehonwe, the Original Peoples of Turtle Island.