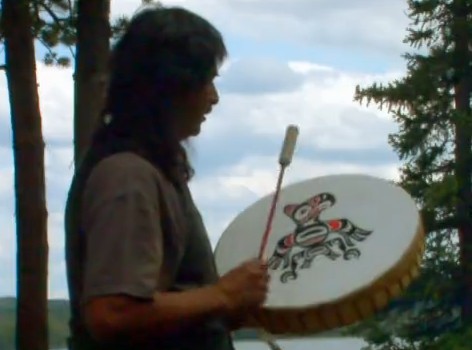 Teztan Biny is one of 16 lakes in Canada that the Federal government marked for reclassification in 2008, using a controversial provision under the Fisheries Act that allows them to redefine any lake as a “Tailings Impoundment Area.” Once a lake has been “redefined” it is no longer considered a natural body of water.

Located within the Tsilhqot’in Peoples traditional territory, Teztan Biny is home to a unique species of Rainbow Trout that cannot be found anywhere else in the world. The BC-based mining company Taseko plans to remove the trout from Teztan Biny and transport them to a manufactured replacement lake six kilometers away.

Once the Trout have been removed and the lake drained, Taseko will dump an estimated 700,000,000 tons of tailings and other waste material, including arsenic, mercury, lead, cadmium and other toxic metals into Teztan Biny.

As noted by RAVEN, the non-profit group behind the film Blue Gold, the mining waste “will permanently scar the area, destroy habitat for major species like grizzlies, moose and deer, and potentially contaminate the largest wild salmon run in North America (the Fraser River) ”

The area is also sacred to the Tsilhqot’in People. The Council of Canadians explains, “It contains pit houses and burial grounds that would be destroyed by the project. The Tsilhqot’in have also been passing on their cultural heritage by teaching younger generations to fish in Teztan Biny. It’s destruction would be a severe attack on the community’s cultural integrity.”

Blue Gold is being Premiered in Canada, today, March 11, 2010, at the David Lam Auditorium, University of Victoria. (details here)

To learn more about Blue Gold and the struggle to protect Teztan Biny, visit: http://www.raventrust.com and http://www.protectfishlake.ca

1. If you’re in the area, a protest for Teztan Biny is being held on March 22 at Williams lake. See here for details.

2. You can also send a message to MP Dick Harris to voice your opposition to the project at: harrir1@parl.gc.ca and Canadian Environment Minister Jim Prentice at: Prentice.J@parl.gc.ca — A sample letter is available here.

3. Finally, there is a petition you can sign at http://www.protectfishlake.ca/