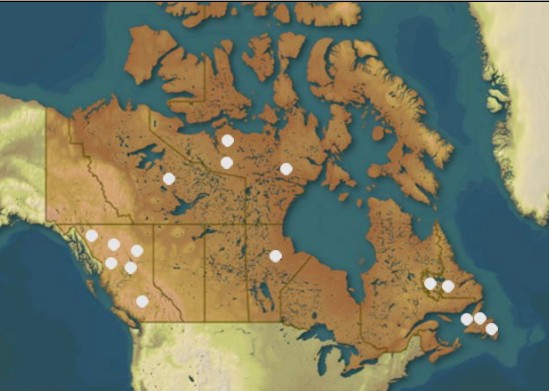 The Federal Government is set to ‘reclassify’ 16 lakes across the country as toxic waste dumps for the mining industry.

Under the Fisheries Act, companies are not allowed to place harmful substances into fish-bearing waters – however, there’s a provision under the Act known as “Schedule Two” which allows them to redefine any lake as a “Tailings Impoundment Area.”

Once a lake is redefined its no longer considered a natural body of water, and a mining company can go ahead and use it as a dumping ground.

The CBC notes that,

Since the introduction of Schedule Two of mining effluent regulations under the Fisheries Act, in 2002, 16 lakes have been proposed for reclassification as tailings dumps.

Four of the 16 are already being used as dumps — all in Newfoundland. Two of those are at the Duck Pond Mine and the other two are older mines due to be brought under Schedule Two retroactively.

Only one of the 16 — Kemess North in B.C. — has been turned down. Eight are to be decided in the coming year.

One of those lakes is located in the northwestern B.C region known as the Sacred Headwaters, within the Traditional Territory of the Tahltan Peoplse.

The company bcMetals (now owned by Imperial Metals) has been trying to get approval to use the headwaters as a tailings dump for its proposed Red Chris copper and gold mine. As noted last year in the Tyee, the mining project would “have two huge open pits and will leave behind approximately 183 million tonnes of toxic tailings and 307 million tonnes of waste rock, which will likely need to be treated for acid mine drainage for over 200 years.”

The Sacred Headwaters is the birthplace of northern British Columbia’s three great salmon-bearing rivers: the Stikine, Nass and Skeena Rivers. For generations, the Tahltan have hunted and trapped in the Headwaters region.

The Red Chris mine, along with 19 other development projects (in various stages) are being pursued in the region without the Tahltan’s benefit or consent threatening to lay the Headwaters to absolute waste. As such, the Tahltan have consistently resisted the projects.

In 2004, the Department of Fisheries and Oceans (DFO) leaned an inch toward the Tahltan, announcing that they would hold public consultations and conduct a comprehensive study of the Red Chris mine. However, later that year they completely reversed their decision, saying there was now no need for either.

Two years after that, the DFO along Natural Resources Canada went even further, declaring the mine just didn’t pose a danger to the environment. Shortly thereafter, Ecojustice lawyers filed a lawsuit against the government, saying the evasion of the study and consultation was illegal.

In September 2007, the Federal Court agreed with Ecojustice, ordering “that the Red Chris mine be denied any federal permits on the basis of unlawful environmental assessment.”

In his reasons, Mr. Justice Martineau said that DFO’s re-scoping of the project from a Comprehensive Study to a screening in December of 2004 “has all the characteristics of a capricious and arbitrary decision which was taken for an improper purpose.”

Last week, the Federal Court of Appeals reversed this decision, “paving the way” for the government to reclassify the headwaters and any other lake in Canada as a toxic waste dump. On top of that, the government doesn’t even have to consult anyone now. It’s like a dream come true.

The Tahltan have been fairly quiet in recent months, focusing mostly on Shell’s plan to turn the Sacred Headwaters region “into a coalbed methane gas field scarred by a maze of wells, pipelines and roads.” But now that the Red Chris mine has been effectively approved, it will only be a matter of time before they gather themselves for the good of the land.

Lakes proposed for use as Waste Dumps

From Mining Watch Canada: The government needs to hear from Canadians that the use of natural, fish-bearing waters as mine dumps is not acceptable!

Please let Loyola Hearn (Fisheries and Oceans Minister), John Baird (Environment Minister) and your local MP know about your concerns for the future of Canada’s lakes and streams. Write, e-mail, or fax them and tell them that NO more Canadian lakes and streams should be used for tailing dumps. Please also send a copy of your message to MiningWatch. Contact information and a sample letter can be found below:

Because lakes and rivers are fish habitat they are protected by the Fisheries Act. The Fisheries Act is Canada’s oldest environmental legislation and prohibits the release of “deleterious substances” into fish-bearing waters, and the alteration or destruction of fish habitat. However, in 2002, a “schedule” was added to the Metal Mining Effluent Regulations under the Act. Schedule 2 essentially re-defines any natural water body listed on it as a “Tailings Impoundment Area.” Once a lake or river has been put on Schedule 2, it is no longer considered a natural water body (and no longer protected by the Fisheries Act) and a mining company can use it as a dumping ground for millions of tonnes of tailings and waste rock.

The first two lakes to be approved for destruction, in 2006, were near Buchans, Newfoundland. These lakes used to contain Atlantic salmon and brook trout and were also home to otters. Since then the requests from the international mining industry to use Canadian waters for their toxic waste disposal have increased at an alarming rate.

Under current legislation and policies mining companies are required to compensate for the loss fish habitats that are turned into tailings impoundments. However, even fisheries and oceans experts acknowledge that entire lake eco-systems cannot be compensated for:

“As far as I am aware there has been no successful compensation undertaken for the loss of a fish-bearing lake.”
“…no examples of whole lake restoration and compensation to guide developments forecasts irreparable harm.”

“If DFO approves [whole lake destruction] at that point then it is clearly not based on any technical or science-based arguments” (quotes from S.C. Samis, I.K. Birtwell, and N.Y Khan. 2005.)

The fate of many of these lakes has yet to be decided, however there is currently a strong bias within the government towards allowing the use of water bodies to receive mine wastes. Environment Canada staff have told MiningWatch that this is not only an appropriate action, but in some cases it is the “best solution” for dealing with mine wastes. It is now critical that Canadians weigh in to stop the destruction of more of our precious water resources.

Like most Canadians I am very concerned about the conservation of our precious freshwater resources. In a number of public statements you and Prime Minister Harper have said that you share my concern and expressed your commitment to protecting our fresh water and aquatic ecosystems.

I find the practice of using natural water bodies as dumping areas from mine wastes a disturbing contradiction of Canadian interests and values, and of the governments stated commitments to environmental protection and sustainable development.

Given that alternative methods of dealing with mining waste are available and are currently used in Canada and elsewhere, I would respectfully insist that you fulfil your obligations and stated commitment to protecting our freshwater and aquatic ecosystems by ending the use of natural water bodies as “tailings impoundment areas”.