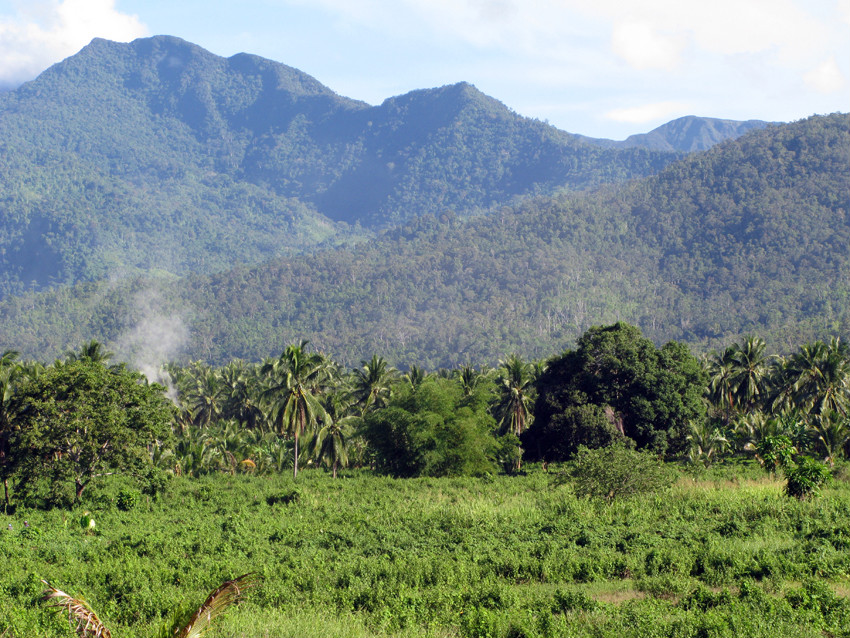 Troubling Developments for the Island of Palawan

A view of the beautiful wild and cultivated landscape being threatened by mining companies (ALDAW)
Support our journalism. Become a Patron!

Government agencies in the Philippines are continuing to ignore provincial and state regulations to protect foreign mining interests in the island Province of Palawan; and now, the Armed Forces of the Philippines (AFP) steps in to the fray, announcing plans give mining firms, including some Canadian companies, direct military support.

In a highly contentious move, last week the Philippines’ Department of Environment and Natural Resources (DENR) granted MacroAsia Corporation (MAC) an Environmental Clearance Certificate (ECC) to finally begin mining operations in the Municipality of Brookes’ Point on the island of Palawan.

According to Artiso Mandawa, chairman of the Ancestral Land/Domain Watch network (ALDAW), the DENR’s decision was completely illegal. “In Palawan the law requires mining companies to secure first a clearance from the Palawan Council for Sustainable Development (PCSD) before applying for a ECC and — as of now – MacroAsia has failed to do so,” says Mandawa.

The DENR’s decision was most likely an attempt to avoid any more delays to the mining project. As ALDAW explains in a recent press release, “less than two months ago, the indigenous peoples of Palawan and the local NGOs… succeeded in obtaining from the PCSD a deferment of [a clearance]… until a multi-partite team composed of PCSD technical staff, local government officials, NGOs and Indigenous Peoples’ representatives [could visit] the proposed area to investigate ALDAW’s findings and the complaints raised” by NGOs and Indigenous Peoples.

Now it’s as if the investigation isn’t necessary; except, of course, for the fact that it’s still required by law.

“Ironically enough the DENR, through the issuance of an ECC to MacroAsia, is not only bypassing legal procedures, but it is also infringing the Philippine Mining Act which prohibits mining in old growth or virgin forest, proclaimed watershed forest reserves, wilderness area, and other areas of outstanding environmental value. The DENR is also neglecting those international obligations to which the Philippine Government is obliged,” ALDAW continues.

For instance, Palawan is a UNESCO Man and Biosphere Reserve; however, “the national government is violating the condition for which such prestigious award was granted. Not only MacroAsia operations, but also those of other mining companies in Palawan are contravening the provisions contained in well-know conventions ratified by the Philippine Government: the Convention on Biological Diversity (CBD)], the UN Declaration on the Rights of Indigenous Peoples, etc.” says Dr. Novellino, a UKC/CBCD researcher.

Those other companies, particularly the Ipilan Nickel Corporation (INC) and Lebach are posing equally serious threats to the Indigenous Peoples of Brookes’ Point. “The latter has been given both SEP clearance by the PCSD and ECC by DENR over a total area of 5,839 hectares and, again, without the consent of the local communities. The local inhabitants are now questioning the authenticity of the so called Certificates of Precondition issued by the National Commission on Indigenous Peoples (NCIP), in favor of Lebach,” says ALDAW 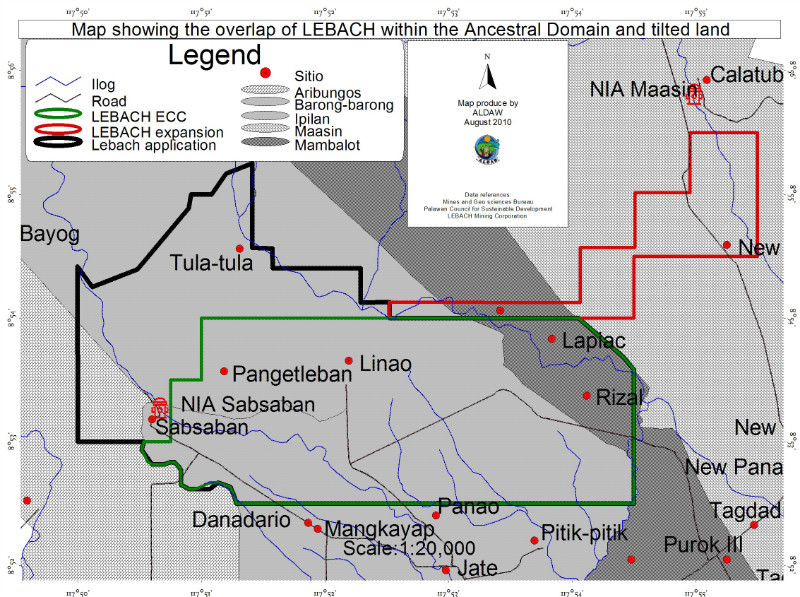 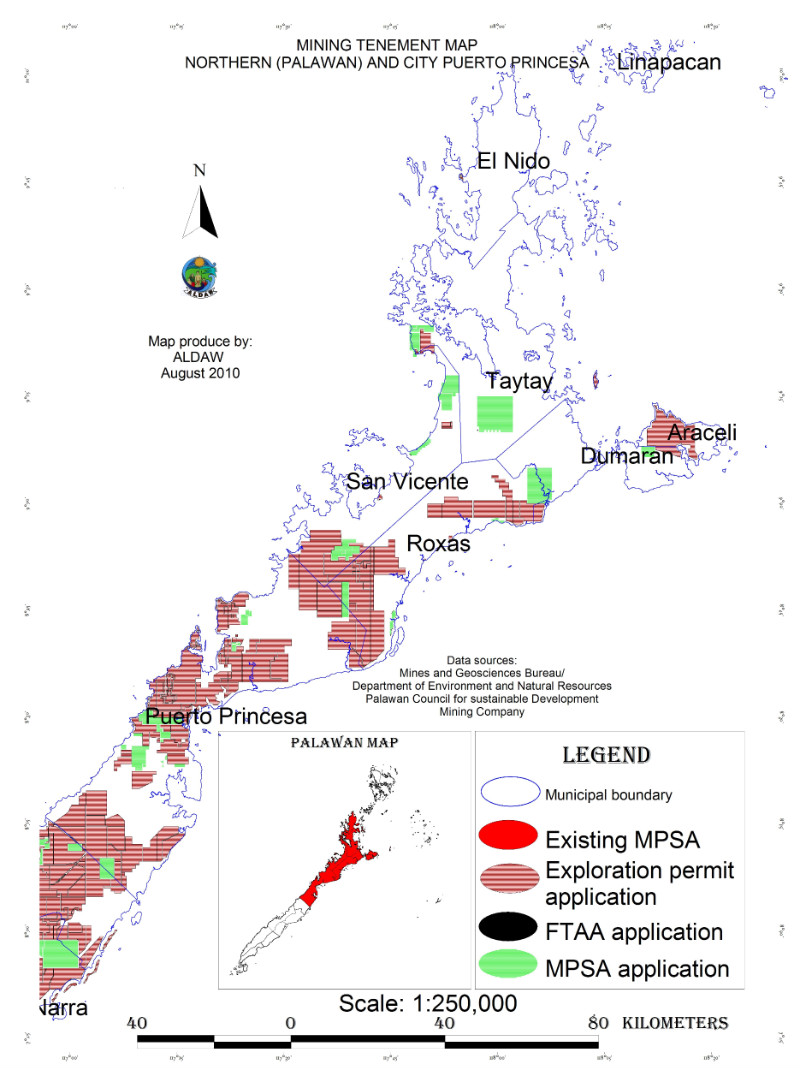 The NCIP claims that the company’s concession “does not overlap with the indigenous ancestral domain. This claim, of course, has been contradicted by both indigenous peoples and farmers who have now decided to file criminal and administrative cases against PCSD, DENR and NCIP. Even more worrying is the fact that large tracts of Lebach concession include cultivated land, as well as the farmers’ and indigenous peoples’ settlements. According to recent field information, the Lebach company is now harassing and intimidating local farmers by cutting their coconut palms. The final objective is to force peasants out of their land.” 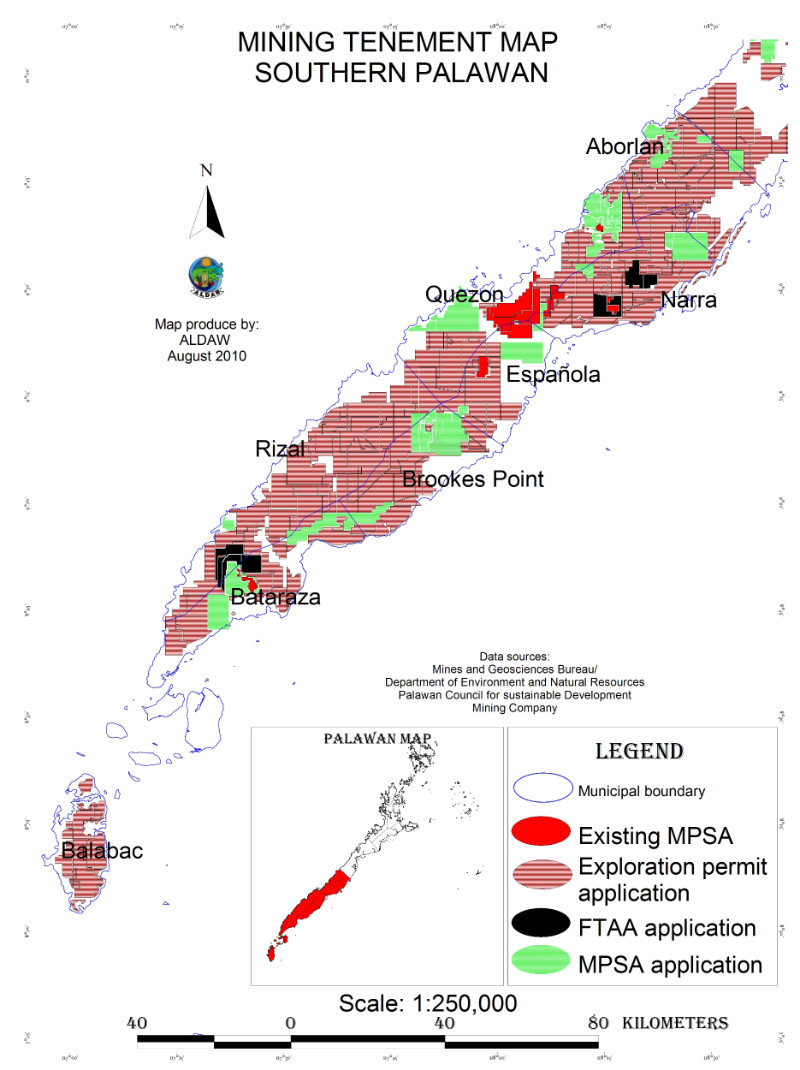 In spite of the law and in spite of the rights of farmers and Indigenous Peoples on Palawan, “mining pressure on the Philippine Last Frontier is escalating, with DENR fast-tracking mining contracts at an alarming speed. For both indigenous organizations and NGOs, having to deal with the widespread corruption, and with the multitude of new and emerging mining companies, has become a very strenuous, uncertain and overwhelming task.”

“For this reason,” says Artiso Mandawa “we are now looking for a long-lasting and stable solution to this problem. Hence we are appealing to the newly elected president Noynoy Aquino to scrap the mining act and declare Palawan a mining-free province. The President has the power to reverse those policies that have brought much suffering to our people and to our precious environment”.

The Militarization of Palawan

As if the task wasn’t overwhelming enough, now the Armed Forces of the Philippines (AFP) has announced that it wants to provide direct military support to any foreign companies operating off the Island’s coast.

According to a recent article on the Philippine Inquirer, the AFP–which is composed of the Philippine Army, Navy and Air Force–has said it wants to start working for foreign companies in exchange for “patrol boats, helicopters and other hardware” says the Philippine Daily Inquirer.

Indigenous peoples’ and farmers in Palawan are deeply concerned about the proposed offer, says ALDAW.

“[If a deal goes though, it] will place the IPs and farmers in a very vulnerable position and they would then become the victims of harassment and extrajudicial killing. “In other parts of the Philippines, members of indigenous communities, because of the abused, perpetrated by the militaries against their own communities, have joined forces with NPA (Maoist New People’s Army). In most cases, this has complicated the situation rather than improved it, making the whole communities even more exposed to militarization and military abuses.”

“[We want] to avoid, in all possible ways, that the IPs’ and farmers resistance will be labelled by militaries as a form of ‘terrorism’ or as an insurgency movement.”

An ALDAW spokesman adds, “Palawan is a natural paradise that has been sustainably managed by our local indigenous populations since time immemorial. Now we have learned that militaries could be deployed in our territory to protect those companies which could destroy, in less than a decade, what we have been conserving over thousands of years: the very resources from which we depend for our livelihood and cultural integrity. Former President Gloria Macapagal Arroyo was a major stumbling block in the fulfillment of people’s rights. Now we hope that Noynoy Aquino will distinguish himself from his predecessor, by implementing effective measures against the impunity over human rights abuses that has so deeply pervaded the Armed Forces of the Philippines”.

Fortunately, the AFPs offer hasn’t been formalized yet. However, if the government’s irrational obsession with mining Palawan is any indication, than it will only be a matter of time before they start working for the companies; protecting their hopes to turn Palawan into a mining wasteland.