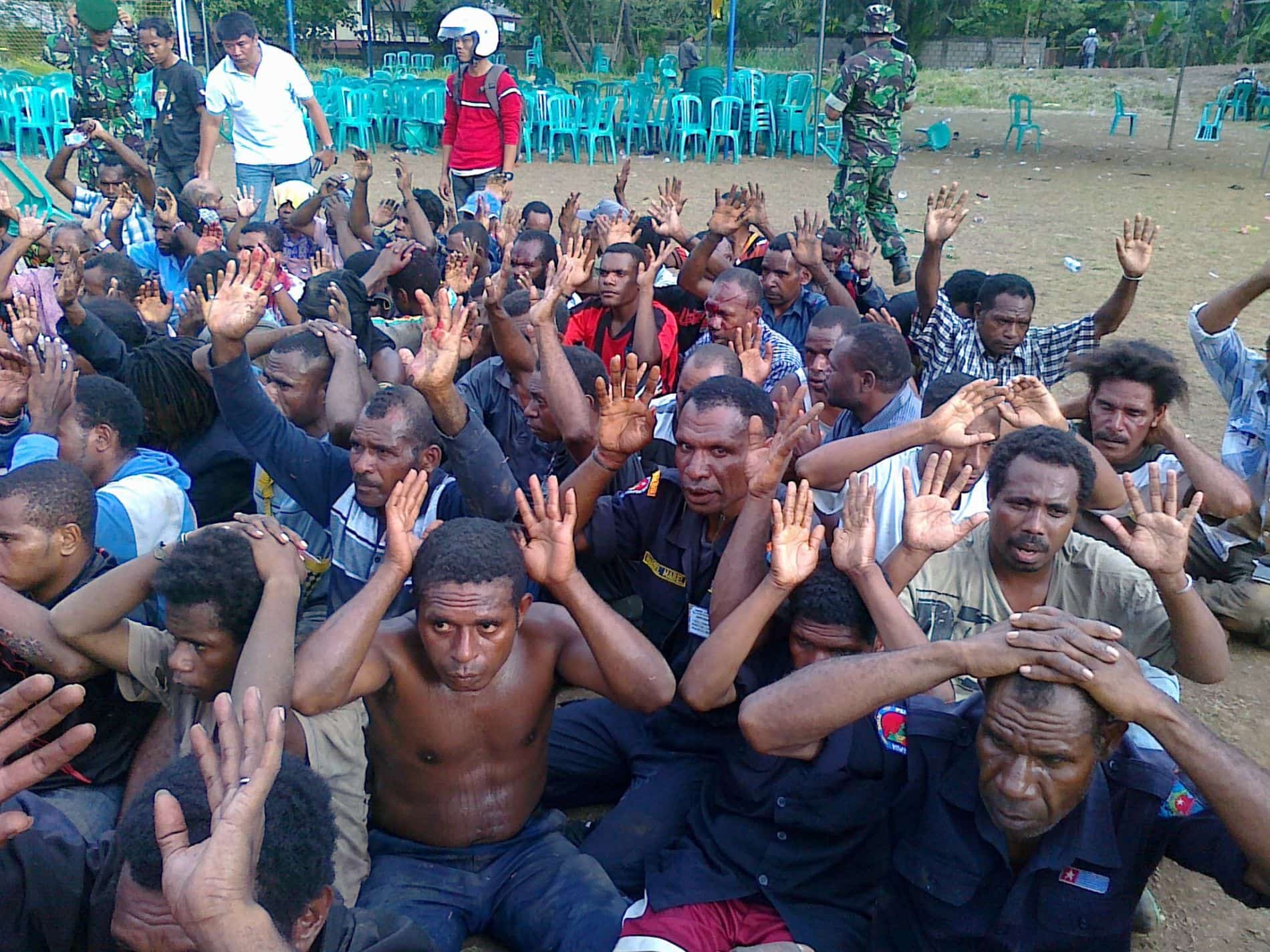 Archival photo of a group of West Papuans who were arrested and tortured by Indonesia police and military (2012). Photo: Bati Papua
Support our journalism. Become a Patron!

Last month, a small group of West Papuan prisoners attempted to escape Indonesia’s Abepura prison before being caught and brutally tortured. In the end, two men, Maikel Ilinmaton and Selyus Logo, were killed and eight others were hospitalized in critical condition. This level of brutality has been a common occurrence in West Papua for decades, which the Indonesia government makes sure the world doesn’t see.

West Papua has been under non-stop military occupation by Indonesia since 1969. On August 2, 1969, 1,026 Indigenous West Papuans were held at gunpoint and forced to vote for Indonesian rule. Ironically, the process of colonization was facilitated by the United Nations and called an ‘Act of Free Choice’. This travesty is now known by West Papuans as the ‘Act of No Choice’ – which is both an accurate description of what occurred and a rallying cry for the independence movement demanding actual free choice in determining who their sovereign power will be.

The U.N. claims there are only 17 Non-Self-Governing-Territories in the world– a diplomatic way to refer to colonized peoples. The U.N. classification excludes West Papua, pretending that the problem of colonialism was settled back in 1969 when West Papuans voted to join the Indonesian state – as if people would freely vote against their own self-determination. This ongoing erasure of Indigenous peoples and their fights for sovereignty is not unique to West Papua – instead it is symptomatic of the ongoing global colonial agenda to silence and eliminate Indigenous peoples. 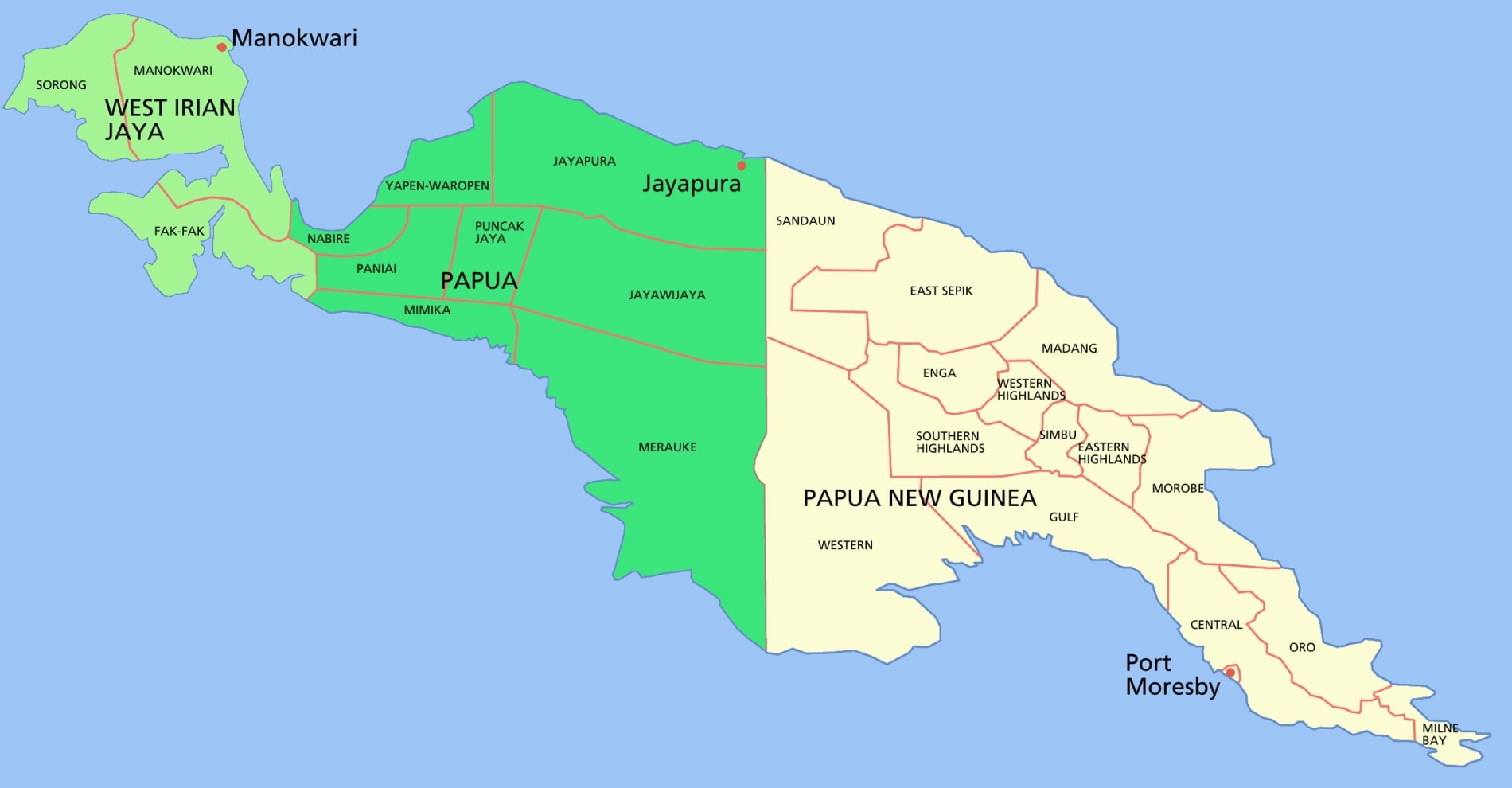 Colonialism and neocolonialism can be difficult to identify to the untrained eye. While both structures are practices of economic, political, and social domination over another people, they differ in practice. Colonialism is an explicitly violent process of extermination, assimilation, and physical occupation of the lands of another people. Neocolonialism is a master of disguise that hides behind the cloak ‘economic development’, aide provided to countries in distress, foreign land acquisition by transnational corporations, and other fabrics that can’t be easily identified.

But in the case of West Papua, blatant colonialism is easy enough to spot. The Indigenous peoples of West Papua were not consulted in who would be their sovereign power. They have been massacred for decades by the Indonesian army, who used the most brutal means to justify its ends: to control the colonized. West Papuans have been forced from their ancestral lands to create space for agribusiness to move in and reshape the island to serve as the ‘Food Basket’ of Indonesia.

The Fight for West Papuan Independence

The Indigenous peoples of West Papua – which includes the Armung, the Asmat, the Bauzi, the Dani, the Ekari, the Fayu, the Kombai, the Koteka, the Korowai, the Lani, the Marind, the Mek, the Moni, the Sawi, the Wolamni, and the Yali among other nations– have been fighting for self-determination and independence from Indonesia for the last 50 years. Resistance occurs both through non-violence tactics and armed resistance.

Non-violent tactics, currently led by the United Liberation Movement for West Papua (ULMWP) have included the raising of the Morning Star Flag, petitions for another independence referendum, the boycott of elections, and protests against multinational corporations developing extractive industries and destructive infrastructure throughout West Papua. 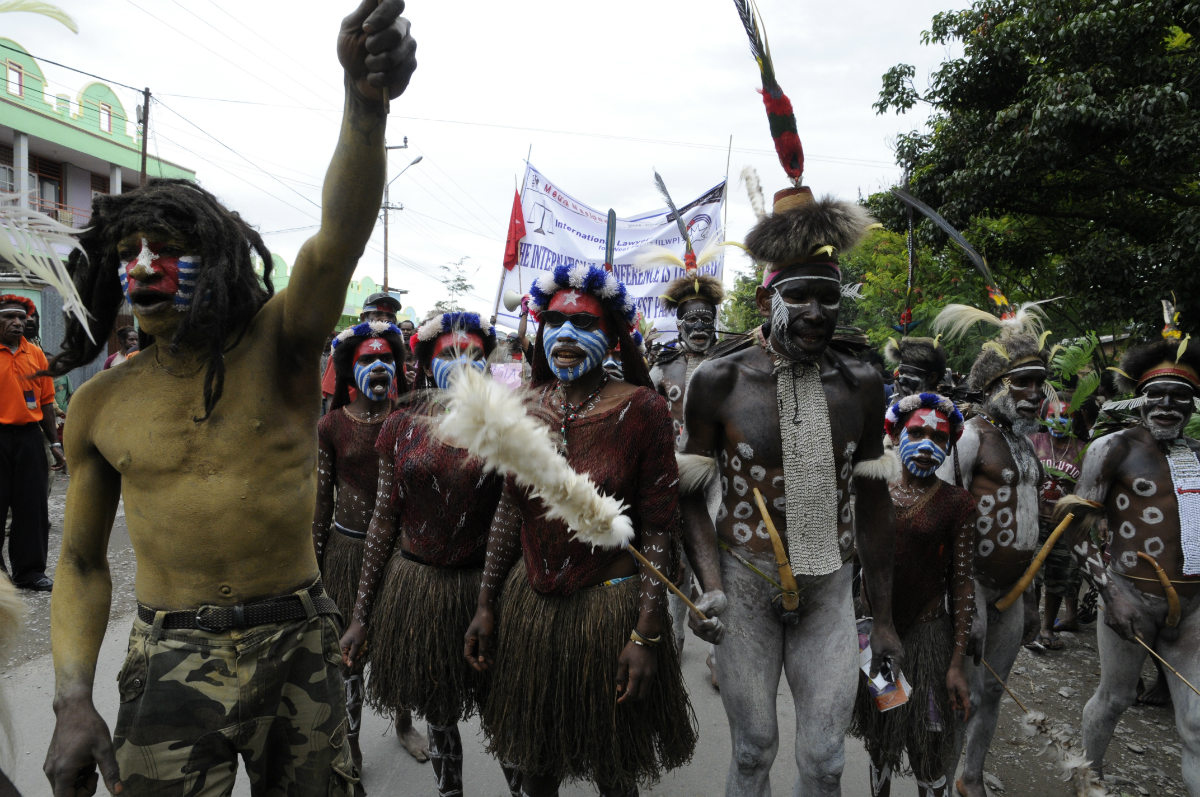 An August 2, 2012 rally led by the KNPB in Wamena. Photo: Martin Pelcher

The Free Papua Movement (OPM) and the West Papua National Liberation Army (TPNPB) are the two well-known guerilla military operations fighting back against the violence wrought by the Indonesian Army. The Indonesian state claims all attacks by the freedom fighters are unprovoked acts of terrorism against innocent civilians causing needless violence and death that would not be taking place otherwise.

What Indonesia so conveniently fails to mention is the genocide they have wreaked on the Indigenous peoples of West Papua for the last 50 years that has claimed upwards of 500,000 lives while raping, torturing, imprisoning, and disappearing countless more. Over time, it has become clear that resistance is not a choice for the people of West Papua – it is their only chance for survival.

West Papuan independence is fought by all peoples in the name of self-determination and the safety that will provide – but will West Papuan governance actually mean safety for all?

Self Determination of West Papuan Women

In the 1980s, women like Johana Regina Rumadas, Elsye Ayamseba, Dorcas Hanasbey, and Greet Jolmend founded the Working Group on Women (KKW) which worked to empower women and help them to achieve greater access and success within the economic and social spheres of society.

In 1997, riding the wave of social and electoral reform in West Papua at the time, women became more outspoken on the issue of violence against women. Women activists worked with organizations like the Women’s Health Network in Eastern Indonesia (JKPIT) to connect violence against women with the broader narrative of human rights violations in West Papua and Indonesian attacks on the land as one story of colonial extractivism in all facets of West Papuan lives. 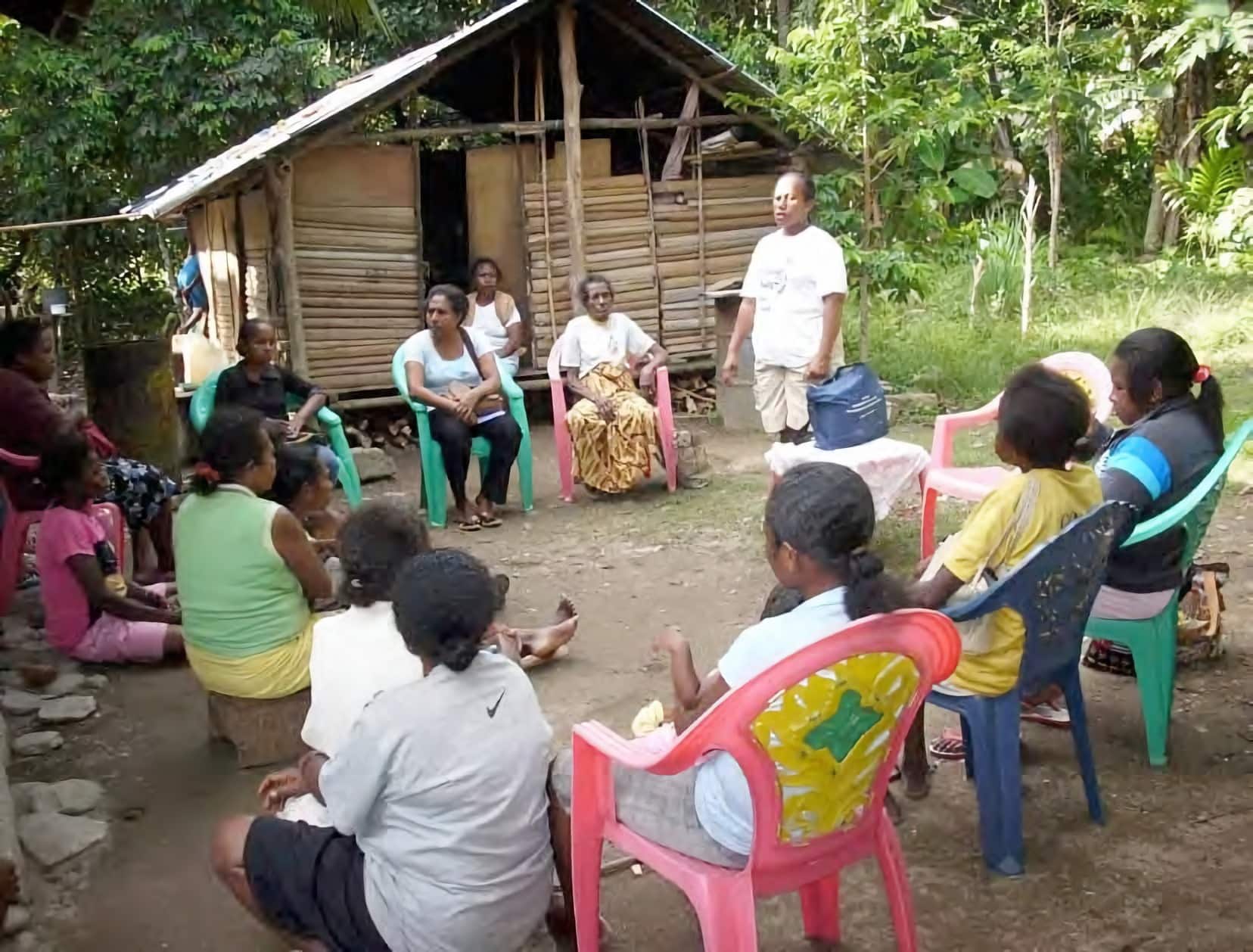 The 2000s found West Papuan women fighting for involvement and representation in the Great Council of Indigenous People of Papua. They also founded the Mamta Alliance of Papuan Women (Mamta APP) which held the Annual Conference of Papuan Women – an event focused on raising awareness on issues like violence against women and gender justice. Outside of the political sphere, women worked to create communities that supported survivors of violence via counseling, prayer, and the development of solidarity.

And yet, despite its façade of public support of decolonization and women’s rights, the UN has done nothing for West Papua. The UN blocked Benny Wenda, and exiled Papuan leader, from presenting a petition signed by 1.8 million West Papuans (70% of the population) that demanded an uncoerced referendum on independence back in 2017. In January of 2019 the nation of Vanuatu helped Wenda deliver the petition to Michelle Bachelet, UN Commissioner for Human Rights, who continued to follow the company line: West Papua is part of Indonesia, it is not a colony, and thus the issue was closed in 1969 and that decision stands today.

Of course, this has not stopped the fight for independence. Most recently, multiple court cases have been filed by West Papuans against the Indonesian state. The National Committee for West Papua (KNBP) is suing the Indonesian police for $100,000 in damages to their headquarters following a raid on December 31, 2018. A second group is fighting for a judicial review of the ‘Act of No Choice’ in an attempt to create a legal precedent to delegitimize the Indonesian claim to West Papua.

Colonial Complicity at the UN

All of these different methods of resistance have contributed to a rising international awareness of the West Papuan fight for independence. In a world full of neocolonial structures that are difficult to oppose because of their inherently hidden agenda, West Papua is the red herring of the UN colonial agenda.

The U.N. talks a good game with its promotion of women and girl’s rights internationally, but as long as the United Nations denies that West Papua is a colonized state, they are actively supporting colonial systems of power that brutally repress and subjugate women on a global scale. While Indonesia is able to get away with blatant genocide and military occupation, the U.N. is complicit in every murder, assault, rape, disappearance, torture, and violation of any and every West Papuan.

Each of us has a choice on whether or not to be complicit in the global project of colonialism.