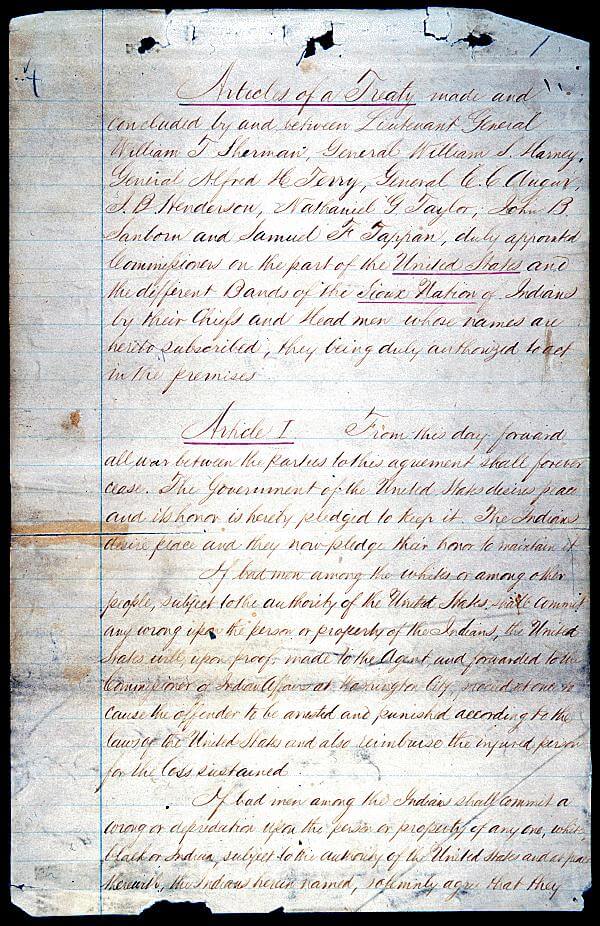 Terra Nullius and the History of Broken Treaties at Standing Rock

Page One of The Treaty of Fort Laramie (aka the Sioux Treaty of 1868). Photo: Archives
Support our journalism. Become a Patron!

If treaties are the supreme law of the land, as the U.S. Constitution states, then how is it that treaties can be so easily broken by a government that claims to uphold a respect for the law? An even more unsettling question: how is it that the trail of broken treaties has been able to span generations under an outdated, imperial logic unknown to the majority of the U.S. citizens? The founding of the United States is predicated on this painful contradiction between principles of equality and rule of law on one side, and the colonial appropriation of land from native peoples who have inhabited them for millennia, on the other.

The current resistance against the construction of the Dakota Access Pipeline (DAPL) is inscribed in this contradiction, making evident the non-rule of law when it comes to appropriating native lands.

The history of Standing Rock is marked by the history of colonization predicated on the Doctrine of Discovery. The progressive erosion of its Sioux territory goes hand in hand with the logic of terra nullius, which framed land in the Americas as “empty” in order to justify settler colonization.

The Sioux Nation has historically engaged in sovereign government-to-government relations with the US government. The first treaty in which the two parties engaged as diplomatic equals was the Treaty of Fort Laramie of 1851. It was the U.S. government who sought the treaty to allow for safe passage of the influx of settlers travelling west through Sioux territory during the Gold Rush from the east coast to California.

The process of negotiating the Treaty of Fort Laramie followed the colonial settler standard used in contemporary treaty negotiations. While the process was equal in theory to the traditional communal decision-making processes under which many Native Nations operated, the colonial method, which uses elected representatives, heavily favored the interests of the colonial government. Ultimately, the treaty established distinct territories for just under 10 Great Plain tribes. The treaty also permitted settlers to travel on the Platte River Road, achieving the U.S. government’s goal.

The 1851 treaty defined Sioux territory as the land where the DAPL is now being constructed. The territory fell within the western half of modern South Dakota, northwest Nebraska, a portion of northeast Wyoming, and a small part of southeast Montana and southwest North Dakota.

From the very beginning, various parties continuously broke the Treaty of Fort Laramie. Many tribes, unaware of the existence of the treaty, continued to carry out raids on tribes on legally different territories. Furthermore, settlers increasingly trespassed into the treaty territories, disrupting the buffalo hunting grounds of Native Nations. The settlers’ wrongful presence on native land led to various hostile skirmishes and bloody battles in which natives were massacred often without provocation.

But the violation of the Treaty of Fort Laramie didn’t stop there. Over the years, the U.S. government has continued to appropriate Sioux land in an ongoing process of colonization that disregards the treaty. (See map.)

In 1861, the discovery of gold in present-day Montana accentuated the flood of fortune-seekers overrunning Sioux lands in violation of the decade-old Laramie Treaty. Sioux protests to defend their rights and territory were ignored, so the Sioux took matters into their own hands to stop the trespassers. The U.S. responded by sending in a military presence.

Instead of adhering to the terms of the treaty, the U.S. government attempted to negotiate another treaty more preferential to its interests. Treaty making, instead of a diplomatic engagement between two equally powerful sovereign nations had turned into a destructive means of grabbing land and resources from native people; a form of ‘conquest by law’ as per the book by Lindsay G. Robertson.

The result was a second treaty of Fort Laramie signed in 1868. This new treaty shrank the territorial boundaries of the Great Sioux Reservation in exchange for the U.S. federal government’s removal of all existing forts in the Powder River area, among other specifications. Yet it was a flawed treaty from the start. Most importantly, it stipulates that no changes can be made to the legally binding agreement unless ¾ of all adult Sioux males consent. Many members of the Sioux nation, particularly those within the boundaries of the territory signed the treaty. But many more bands residing north of the Bozeman Trail, such as the Hunkpapa and Sihasapa bands, did not. The treaty was not signed by three quarters of all adult Sioux males.

Yet, again, the U.S. government violated the treaty. The second Laramie treaty granted the tribes the right of regulating the entry of persons into their territory. Article II of the 1868 Treaty stipulates that nobody can enter the territory without tribal permission. But time and time again settlers have encroached on Sioux territory.

Some Americans may know that in 1874 the U.S. government sent George Custer with a group of scientists to search for natural resources, especially gold, in the isolated mountain range known today as the Black Hills. The gold they found led to an influx of miners, again in direct violation of the treaty.

Eventually, the U.S. government decided to pursue its strategy of land appropriation without bothering with the pretense of legality. The Sioux learned to be wary of treaties with the U.S. and refused to sign away their land.

In 1877, Congress unilaterally passed an act removing the sacred Black Hills from the Great Sioux Reservation, without the ¾ consent of the Sioux mandated by the Laramie Treaty of 1868. This illegal grab of sacred land brought no legal repercussions to the party that violated the treaty—the U.S. government.

In 1889, Congress again diminished the Great Sioux Reservation with the Dawes Act and Allotment Act, partitioning it into six sections, one of which was the Standing Rock Sioux Reservation. This opened up parts of the reservation to outside settlement, even though the native government still controls all reservation lands.

Sioux struggles for water are embedded in such displacements. In 1948, the U.S. government began construction of Oahe Dam, despite resistance from local tribes. Its creation flooded tribal land and forced a quarter of the reservation’s inhabitants to move.

In 1958, a federal court ruled that Lake Oahe was part of the Standing Rock territory according to the 1868 Fort Laramie Treaty. In this ruling the court said, “Where there is a treaty with Indians which would otherwise restrict the Congress, Congress can abrogate the treaty in order to exercise its sovereign right.” The court openly articulated the self-arrogated right of the U.S. government to go back on treaty obligations with Native Americans to unilaterally exercise its sovereign power.

The U.S. did just that, taking the Lake Oahe land from the Standing Rock tribe through legislation passed by Congress in September 1958 [Public Law 85-915].

Legal abrogation, or repealing legislation, dispenses with any idea of fair treaty making between equals. It undermines native sovereignty, following a racist logic of colonial elimination. It dispenses with numerous prior legal precedents that granted Native Americans some rights, such as the Indian Appropriations Act of 1871, which declared that no treaty obligation with an Indian nation before March 3, 1871 can be “invalidated or impaired.” It puts into question the idea of the “federal Indian trust responsibility,” articulated in the Seminole Nation v. United States case of 1942, which entailed an obligation on the part of the U.S. government to protect tribal treaty rights, land, assets and resources, per the Department of the Interior Indian Affairs branch.

As a federally recognized tribe, the Standing Rock Sioux Tribe is legally entitled to these obligations. However, as history has shown, U.S. principles and laws do not seem to have the same meaning when it comes to Native Americans.

The United States claim that it can abrogate treaties with Native Americans has been upheld by US courts as legal. Law in our modern eyes carries the weight of legitimacy.

But because something is legal does not make it right. In the case of the Sioux, alongside every other Native American nation, laws and treaties have all too often been used not as a protective shield, or even as a neutral arbitrator, but as a weapon. That weapon is predicated on a racist, colonial history that invalidated native people’s rights to their land, to their sovereignty, to their cultural expression, to their very lives.

Whether it is the gold rush or the oil rush, the U.S government continues even now to invade native land and break treaties. The proposed DAPL would pass under Lake Oahe, the land that was openly, “legally” taken from the Sioux tribe in 1958 by Congress, despite the prior 1868 Treaty that had legally granted the Sioux rights to the land.

Today’s protests at Standing Rock today can only be fully understood in light of this colonial legacy, which from the beginning proclaimed that native lands were empty and that native people, were, in effect, nothing more than the rocks, the trees, the water that they now so valiantly strive to protect.

Let us fight against this narrative, and show through Standing Rock that native tribes are sovereign nations that possess the inherent right to life on their territories. Let us show that Native American lands are not empty, but that proud sovereign peoples live there, alongside the earth, water, rocks and trees, wind and sky, encompassing a vibrant fullness in their long defense of life.

There never was terra nullius. The only emptiness to be found exists in the hollow promises of the United States, in the historic lack of equitable substance in the U.S. legal system.

In that spirit, many U.S. citizens are now, finally, refusing to turn a blind eye to the trail of broken treaties. They stand with Standing Rock, and are petitioning President Obama to honor the treaties (petition here): “The Native nations have upheld their end of the bargain; it is time the U.S. government did the same.”