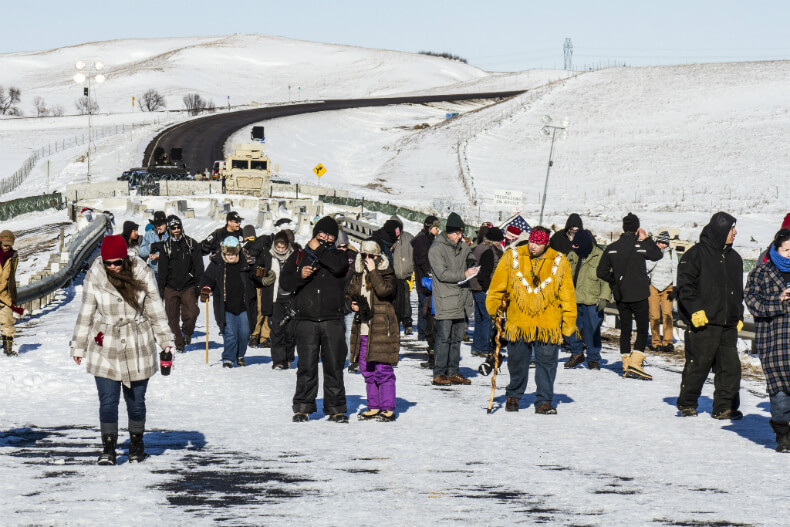 The Suspended Battle at Standing Rock

Photo by Dark Sevier/flickr. Some rights reserved.
Support our journalism. Become a Patron!

Two Sundays ago, the Water Protectors celebrated a major victory when the U.S. government announced that it would not encroach on Sioux ancestral lands. The Dakota Access pipeline (DAPL) was set to pass under Lake Oahe, the tribe’s only water source. Energy Transfer Partners had already ignored evidence that the path of the pipeline would cut through sacred ground and destroyed many of those sites. Then on December 4, 2016, the US Army Corps of Engineers (USACE) announced it would not grant the easement for the DAPL to drill under Lake Oahe.

It was not a mutual recognition of sovereignty between the U.S. and the Dakota and Lakota of Standing Rock that led to the easement. It was the largest mobilization of Native peoples and allies in recent US history. The technical decision suspended the construction and brought the promise of an environmental impact statement before defining a new route.

The decision not to grant the easement to Energy Transfer Partners came after months of legal battles that remain unresolved.

Though the federal government decided “not to grant” the easement, they also did not formally “reject” the request and legally deem the easement an unacceptable option. Instead, an environmental impact study (EIS) was required before considering alternate route options. However, as the Obama administration is set to leave office in under 50 days, much uncertainty remains as to whether the Sioux tribe can dismiss the threat of the DAPL putting their water supply and rights to self-determination at risk. 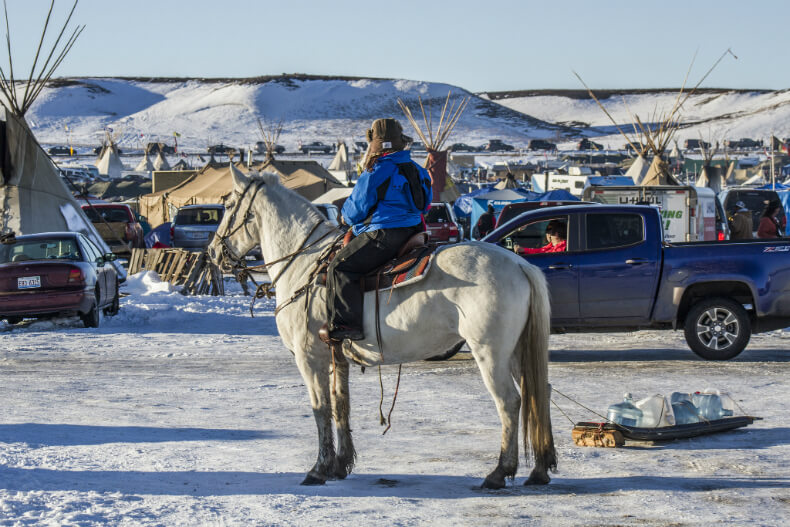 The DAPL was never legally sound. The approval of the pipeline project by the USACE violated the National Historic Preservation Act (NHPA) of 1966. Section 106 of the NHPA mandates federal agencies to consider the effect of projects on Indigenous lands, cultures, and traditions. The act specifically:

The Tribe turned to U.S. courts to uphold rights to consultation over their lands violated by the USACE, but legal processes have been met with inaction and marked in ambiguity.

The timeline of legal battles indicate that U.S. courts failed to acknowledge their rights to self-determination indisputably. Rather, the courts allowed judicial dilation by granting more time to “review” the matter.

On July 27, 2016, the Standing Rock Tribe filed a first lawsuit in federal district court against the USACE. On August 4, 2016 the Tribe requested a preliminary injunction (a judicial order meant to restrain one party from beginning or continuing an action threatening or invading the legal right of another) since the pipeline would be completed before the case was formally decided. But exactly one month later, on September 4, 2016, the Dakota Access pipeline construction workers bulldozed a portion of the pipeline corridor filled with sacred Tribal sites and burials brought to the Courts’ attention the previous day. Lawyers for the Tribe immediately filed an emergency motion for a temporary restraining order to block construction until a decision was reached on the preliminary injunction request.

The Sioux’s legal counsel explained that an “extraordinary concentration of graves including burials of important chiefs and stone features marking a highly unusual and sacred area [were found] directly in and adjacent to the pipeline’s route near Lake Oahe” as described by Tim Mentz, Native archaeologist and Standing Rock member. Mentz described that the Dakota Access consultants failed to thoroughly scan the lands, preferring to rely on a 1985 report instead. The pipeline threatens the preservation of important archaeological discoveries such as a stone engraved with the Big Dipper constellation, a sign that a major tribal leader was buried nearby.

On September 9th, the Court denied the tribe’s preliminary injunction and the Departments of Justice, Interior, and the USACE immediately released a joint statement requesting the company to “voluntary pause all construction”:

“The Army continues to review issues raised by the Standing Rock Sioux Tribe and other Tribal nations and their members and hopes to conclude its ongoing review soon. In the interim, the Army will not authorize constructing the Dakota Access Pipeline on Corps land bordering or under Lake Oahe. We repeat our request that the pipeline company voluntarily pause all construction activity within 20 miles east or west of Lake Oahe.”

Expectedly, the energy company ignored the request of US courts and continued construction, committing to its own self-interest and further ignoring the lives at stake in the pipeline project. In response, the Sioux tribe moved to mobilize further bringing together over 300 Native nations and other allies to the Oceti Sakowin camp just outside the Energy Transfer Partners’ construction site. Even amidst the increased presence of the media at Standing Rock, the legal back and forth continued and decisions remained ambiguous. 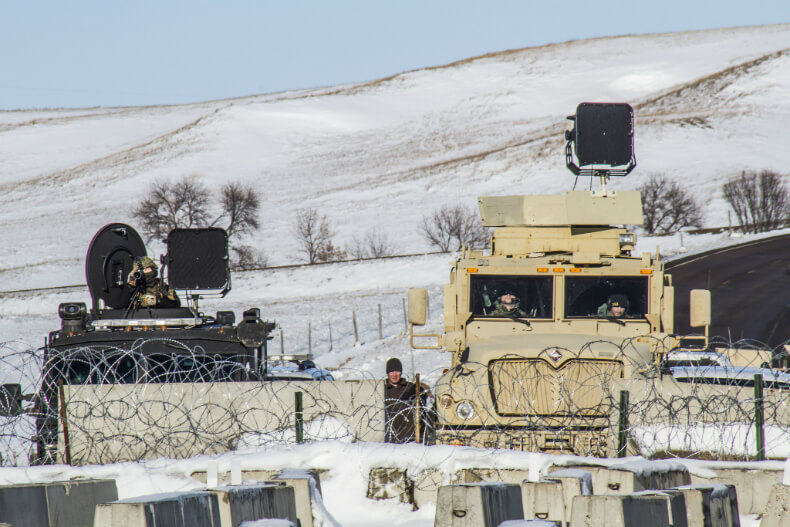 The Sioux filed a request for an appeal of the denied injunction request with the DC Circuit Court of Appeals on September 10, 2016. The appeal was denied on October 9, 2016. The next day, the Departments of Justice, Interior and the USACE, released another order stating, “the Army continues to review issues raised by the Standing Rock Sioux Tribe and other Tribal nations and their members and hopes to conclude its ongoing review soon.”

Legal dilation has amplified uncertainty around the fate of the Sioux. When native rights to self-determination are at stake, U.S. courts respond with a hesitance to act. The lack of clarity, the delays, and the ambiguity of courts have de facto diffused legal responsibility undermining access to justice.

The decision to consider alternate pipeline routes and perform an EIS came just before the December 5th deadline imposed by the USACE to close the Standing Rock protest campsite at Oceti Sakowin due to public safety concerns. If this legal battle has shown anything, it’s that observing Native rights is conditional. An official decision to reject Energy Transfer Partners’ request for an easement is necessary to ensure that the Sioux tribe’s lands, rights, and health are not compromised.

Dallas Goldtooth, Keep It In The Ground Campaign Organizer with the Indigenous Environmental Network poses three very important questions to consider in the midst of the suspended easement decision:

1) Will DAPL investors continue to flee and leave the pipeline financially stranded?
2) Will oil suppliers see the writing on the wall and drop their contracts with DAPL next month?
3) Will President-elect Trump take any action on the pipeline should the first two options not happen?

Although the first two questions do not have sure answers at this time a contingent of Water Protectors are staying behind in Standing Rock at the Sacred Stone Camp site to make sure the pipeline is not completed. The reality of the fast-approaching inauguration of the new president is that Donald Trump has investments in the pipeline and that he can influence the currently suspended easement ruling to re-launch construction if President Obama does not give a final resolution to DAPL before he leaves office. 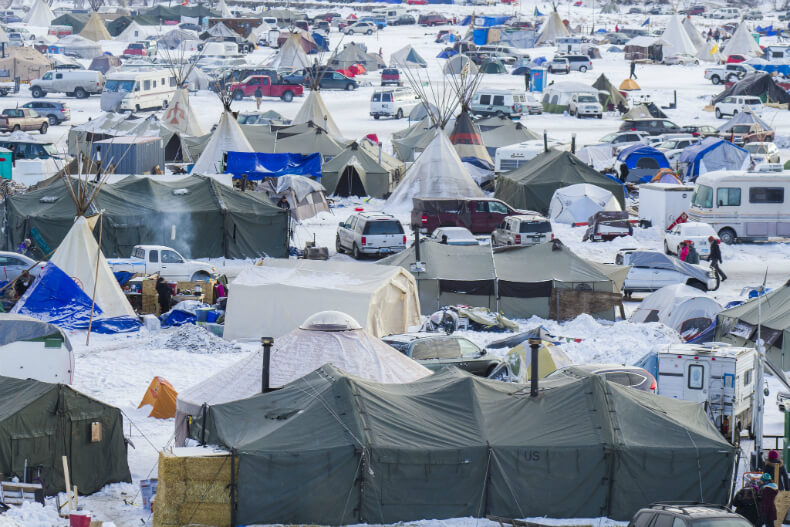 The denial of the easement and consideration of alternate pipeline routes is simply a moment of rest. The legal battles are far from over for the Standing Rock Sioux Nation. Now more than ever, we should be watching the happenings in North Dakota. The legal decision regarding the easement is still outstanding and we must push for a definitive answer before the new administration takes over on January 20, 2017.

Journalist Mike McFeely captured tribal elder, Phyllis Young’s words that explain Water Protector’s determination and will to continue on in the legal battle:

“We will put forward our young people, our young lawyers, who understand the weasel words, now, of the English language, who know that one word can mean seven things. We understand the forked tongue that our grandfathers talked about. We know about talking out of both sides of your mouth, smiling with one side of your face. We know all the tricks of the wasichu [fat takers] world. Our young people have mastered it. I have mastered your language. I can speak eloquently in the English language my grandmother taught me. I also have the collective memory of the damages that have occurred to my people. And I will never submit to any pipeline to go through my homeland.”

Donald Trump has already said he would overturn the legal decision and Energy Transfer Partners announced in a statement that the company remains “fully committed to ensuring that this vital project is brought to completion and fully expect to complete construction of the pipeline without any additional rerouting in and around Lake Oahe. Nothing this Administration has done today changes that in any way.”

Good fences make good neighbors. The famous line used in Robert Frost’s poem “Mending Wall” to articulate the value of a neighbor respecting the other’s property and authority is a lesson the government of the United States and pipeline company Energy Transfer Partners seems to have forgotten. In this battle, this fence is sovereignty. The sovereignty of the U.S. government stops where the self-determination of indigenous peoples start. Respect for this fence is long overdue and this is the sovereignty we will have to defend in the coming weeks and months.

As the battle continues we must urge the federal government to observe the sovereign fence that has always existed and finalize a decision on the easement ruling.

Sophie Delfeus is majoring in political science at Amherst College.