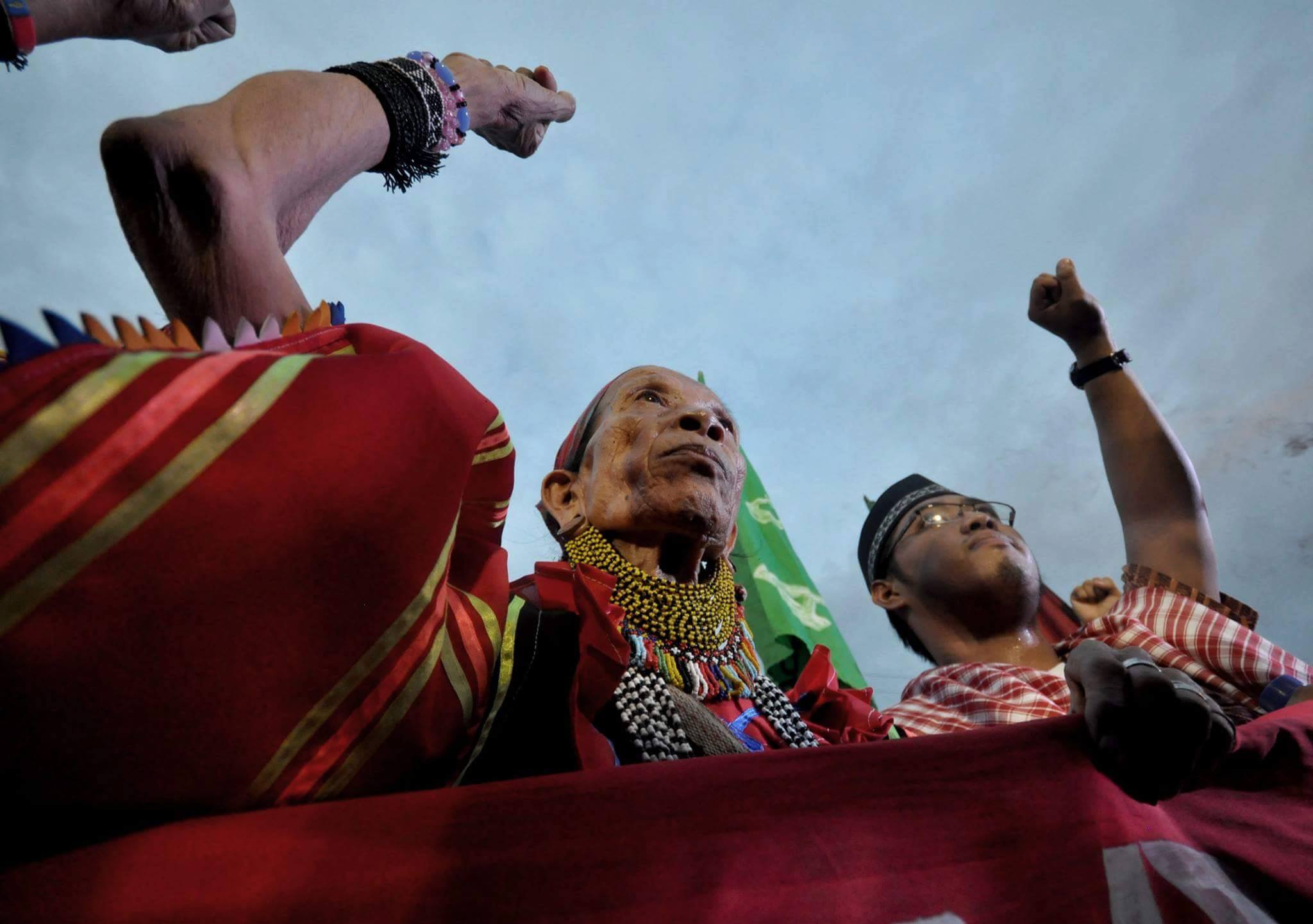 On Oct. 19, 2016, protesters rallied in front of the U.S. embassy in Manila to call for an end to the United States’ economic and political control over the Philippines. The demonstration in support of President Rodrigo Duterte’s independent foreign policy was heavily repressed by a militarized police force that protected the U.S. Embassy at the expense of the Filipino protesters.

When amateur videos showing a Philippine police van ramming protesters at the Embassy went viral, American media outlets like the New York Times and the L.A. Times picked up the story. The episode was framed as an incident of Philippine state violence against anti-American student activists, erasing the Moro (ethnic Muslim) and indigenous claims to self-determination in the Philippines that contextualize the protest.

The October protest was not an isolated event. It was one of many mobilizations organized by the newly formed Sandugo Alliance of Moro and Indigenous Peoples for Self-Determination (Sandugo). Sandugo, as the movement is called, unites the national minorities of the Philippines in their collective struggle for the rights to self-determination and just peace.

The formation of the Sandugo Alliance marks a milestone in the political history of the Philippines. For the first time, Moro peoples and Indigenous Peoples have joined forces to create a unified movement. While the movement is new, its struggles date back to the colonial legacy of mining extraction.

The Philippines is one of the most mineral-rich countries in the world for gold, nickel, copper, and chromite. The country has a long history of mining that began before Spanish colonization, but in the early twentieth century the U.S. brought the means for extraction to new levels. The U.S. issued Act 468, a law that “basically gave the government the right to reserve mineral lands for its own purposes” and “claimed a number of areas as ‘reserved areas’ for future mining.”

More recently, the government liberalized the mining industry through the Philippine Mining Act of 1995 and the 2004 National Mineral Policy Agenda in the name of economic development. Today, over 500,000 hectares of Philippine land are covered by mining concessions.

For Roland G. Simbulan, professor of Development Studies and Political Economy at the University of the Philippines in Manila, extractive mining industries and corporate exploitation are the gravest threats facing Indigenous Peoples in the country today. Mining companies have subjected indigenous communities to forced eviction, loss of livelihood, disintegration of communal ties, and the militarization of their territories.

The Philippines now ranks among the most dangerous countries for human rights defenders in the world. Human rights organizations confirm that anti-mining activists are particularly vulnerable in the Philippines. According to a Global Witness report, the Philippines has the second highest death toll on record with over 30 murders of environmental defenders per year (second only to Brazil). In 2015, there were 22 documented killings of Lumad activists in Mindanao, making it one of the most dangerous regions in the world for land and environmental defenders.

Indigenous and Moro peoples organized a caravan traveling across the Philippines to gather in a national convening at the University of the Philippines, Diliman. On Oct. 15, 2016, over three thousand people announced the formation of the Sandugo Alliance of Moro and Indigenous Peoples for Self Determination. The word “Sandugo,” invoking the pre-colonial tradition of peace pacts among differing tribes, signals the unity of marginalized sectors that represent over 15 percent of the Filipino population.

The newly formed Sandugo Alliance led a series of protests in front of the national headquarters of the Armed Forces of the Philippines (AFP), the Philippine National Police (PNP), the National Commission on Indigenous Peoples (NCIP) and Department of Justice (DOJ), and the US Embassy. The protests highlighted the crimes committed by the military, the police inaction against paramilitary criminals in indigenous communities, and the repression of civilians in anti-insurgency campaigns.

The most publicized protest was at the U.S. Embassy, where demonstrators denounced the government’s tacit support of violence against Indigenous Peoples in the Philippines. Sandugo called for an end to U.S.-backed militarization of their communities, which has resulted in land-grabbing, human rights violations, extrajudicial killings, and displacement. It has also infringed on the rights of Moro and Indigenous Peoples to self-determination.

To this day, the U.S. continues to give millions of dollars in military aid to the Armed Forces of the Philippines, which has at least 56 percent of its forces deployed in Mindanao, a region home to 18 indigenous tribes in the southern Philippines.

The Manobo peoples from Lianga, Surigao del Sur, Mindanao, know the lengths the Philippine military will go to protect the mining industry. They were forced to evacuate from their land after the brutal assassinations of Emerico Samarca, Dionel Campos, and Datu Juvello “Bello” Sinzo on Sept. 1, 2015. All three victims were anti-mining activists. Emerico Samarca was the executive director of the Alternative Learning Center for Agricultural and Livelihood Development (ALCADEV), a school for Lumad children. Dionel Campos was the leader of an anti-mining community organization, Malahutayong Pakigbisog Alang sa Sumusunod (MAPASU). Campos’s uncle, Juvello Sinzo, was a Manobo leader and member of MAPASU.

Two nights before their murders, on Aug. 30, 2015, the Philippine Army’s 36th Infantry Battalion and Special Forces Regiment arrived in Lianga, Surigao del Sur. They asked to talk to Campos and detained Samarca.

The next day, the paramilitary group Magahat-Bagani arrived in the village.

Witnesses recognized members of Magahat-Bagani as fellow Manobo peoples who had been recruited, trained, and armed by the armed forces to conduct counterinsurgency operations. That day, Magahat-Bagani burned the anti-mining MAPASU cooperative and began firing at civilians.

On Sept. 1, at around 4am, members of the AFP-trained Magahat-Bagani publicly assassinated Dionel Campos and Datu Juvello Sinzo. Remains of Emerico Samarca’s slain body were found at the ALCADEV school.

The paramilitary group told community members that they would also be massacred if they did not leave Surigao del Sur within three days. Thousands of Lumad were forced to evacuate their lands, not returning until September 2016.

The army has admitted that their troops were camped nearby when the assassinations took place, but did not take action to stop the killings or prosecute the killers, who have since been identified. In 2016, Human Rights Watch found the Philippine military guilty of the violent attacks and displacement of Indigenous Peoples as well as acting as paid security for mining and plantation operations.

On Sept. 1, 2016, thousands of the Manobo peoples began the journey back to their homeland, a year after their forced evacuation. Less than a month later, they marched as part of the Sandugo Alliance to demand justice for the crimes committed against their community.

Repression at the US embassy

Roberta Ryan, a Bay Area-based activist of Anakbayan, accompanied the Manobo tribe during their transition back to Surigao del Sur.

Ryan traveled with the Manobo peoples to join the Manilakbayan and participate in the Sandugo Alliance week-long program from Oct. 17 to 27, 2016, which included the protest at the U.S. Embassy. According to Ryan, there were approximately a thousand people from Sandugo who marched to the gates of the U.S. Embassy to demonstrate the Filipino people’s strong opposition to U.S. political, economic, and military intervention.

After a smaller embassy protest the week before, members of the Sandugo Alliance anticipated a heavy police presence on Oct. 19, 2016. As expected, lines of police officers attempted to control the protests. A contingent of high school students successfully created a diversion to confuse police officers, spilling fake blood on the gates of the embassy as protesters marched to meet them. Two blocks before the protesters reached the gates, they were met with water cannons.

Although many protesters were hit by the cannons, a special team immediately took action and began cutting the police’s water hoses as they were being used against the crowd.

Shortly thereafter, another police force dressed in all black arrived. Colonel Marcelino Pedrozo questioned why the troops had not arrested any protesters yet and ordered his men to run them over.

Witnesses from the Kabataan Party-List confirm that this is when Pedrozo orderedthe violent dispersal. Fire trucks approached and the use of water cannons continued. Ryan remembers seeing something shoot in the sky, later realizing that it had sprayed her with tear gas. As she tried to find her group in the crowd, she saw the police indiscriminately beating her friends and Sandugo allies. She then witnessed the police van ram into the crowd of protesters. In her view, it was “very obvious that they had the intent to run the [protesters] over.”

Dozens of protesters were injured and arrested during the violent dispersal. Still, the Sandugo allies reconvened and continued on, marching to the Manila Police District to demand their release. Agitated speakers stood on top of jeepneys and expressed their concerns without restraint. According to Ryan, the police blared Christmas music on large speakers in an attempt to drown out their voices.

In spite of the police’s aggression, Sandugo’s multi-sector alliance was able to provide legal resources, funds to pay for medical expenses, and on the ground medical assistance. The arrested protesters were released and did not suffer any fatalities.

Speaking about the dispersal, Ryan recalls “It was the most violent thing I had ever witnessed and at the same time seeing everyone stay together to march to the police district after [the violent dispersal] is the type of unity that I’ve also never experienced.”

Resistance, stronger than ever

Since its foundation, the Sandugo Alliance has continued to galvanize support across the nation with the formation of new chapters and the growing number of Filipino individuals vowing to support their struggle.

As for the Manobo tribe, recent developments have revealed their resolve to take on the mining industry. While Environment Secretary Gina Lopez earlier cleared the firm Claver Mineral Development Corp. (CMDC) during a crackdown on irresponsible mining, on Dec. 16, 2016, two tribal chieftains in Surigao del Norte went over her head. Datu James Biol of the Manobo tribe along with Datu Renante Baklas of the Mamanwa tribe filed a grave and graft misconduct complaint to investigate Surigao del Sur Rep. Prospero Pichay of the CMDC  for conspiracy to illegally mine, transport and sell nickel ores from their ancestral lands. According to the chieftains, “Respondent Pichay could not have successfully committed the foregoing criminal acts which continues and persists up to the present were it not for the active participation of all the respondents from the Department of Environment and Natural Resources and the Mines and Geosciences Bureau.”

While repression against them increases, the Moro and Indigenous Peoples of the Sandugo Alliance are sending a strong message to the U.S., Philippine government, and mining industry alike: the fight continues, and they’re stronger than ever.

Cristina Rey is a Filipina/Cuban American student activist and educator currently based in Western Massachusetts.