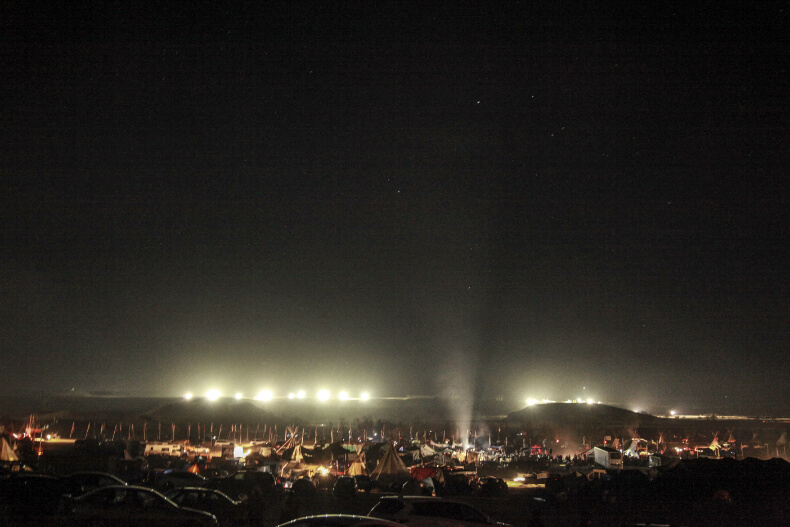 It’s no secret that media coverage of current events is often biased. But when it comes to events involving Indigenous Peoples, coverage is not simply biased, it is nearly non-existent.

The depth of the problem becomes apparent when newspapers, networks, and magazines start to swarm around a single event, telling the same story in different ways and yet still managing to ignore indigenous rights, needs and opinions.

The situation in Standing Rock is no exception. Even though the outcome of this four-month mobilization will immediately impact the lives of at least 10 thousand people, the indigenous side of the story has remained largely invisible in mainstream media.

Coverage finally started to rise a few weeks ago when the police started mobilizing to shut down resistance to DAPL, but as recently as October 29, the struggle still stood in the margins. With protests to the DAPL beginning to organize back in late August, it’s clear that media coverage was far overdue. Indigenous protestors were forced to go to extreme lengths to see their stories gain any sort of traction going so far as to protest outside of the CNN building in Hollywood. One activist said at the time, “We want our mass media to do their job diligently in showing the truth of what’s going on there, [so] the people can be informed correctly.” 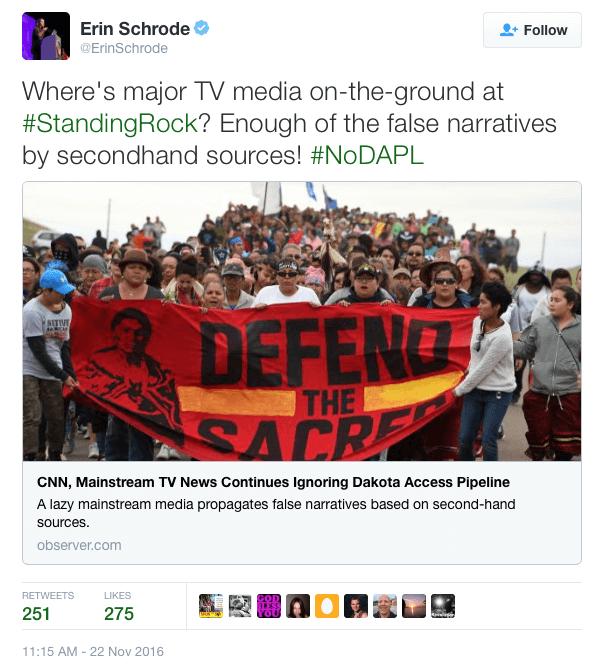 The cry to be heard was only partly successful. Despite being in the age of a 24-hour news cycle, media coverage came too late. And to make matters worse, much of that coverage was reactionary in nature as opposed to being proactive or socially responsible.

The majority of networks and journalists in the United States have simply failed to adequately cover Standing Rock.

There have been some notable exceptions. Perhaps the most well-known example comes from journalist Amy Goodman, an award-winning journalist with Democracy Now! who traveled to Standing Rock to cover the mobilization first hand. Her crew filmed an early round of police repression in which dogs were used to attack water protectors.

This coverage did not go without its own round of repression. On Sept. 8 an arrest warrant was issued for Amy Goodman. She was charged with riot.

The charges were dropped on Oct. 17, but her story is nonetheless crucial to consider in the evolution of coverage surrounding DAPL. As The Nation observed on Oct. 15, Goodman’s presence at the site signaled the first time a major news organization would report from the scene. Punishing that coverage sent a clear message to all media organizations across the United States.

If nothing else, Goodman’s story is a strong reminder of the dire need for widespread coverage of any situation where human rights and environmental issues are a concern. It was easy to target a single journalist for doing her job. If every other news outlet hadn’t been failing to do their job, Amy Goodman would never have been attacked. Other acts of aggression may have also been prevented under the media’s watchful gaze. 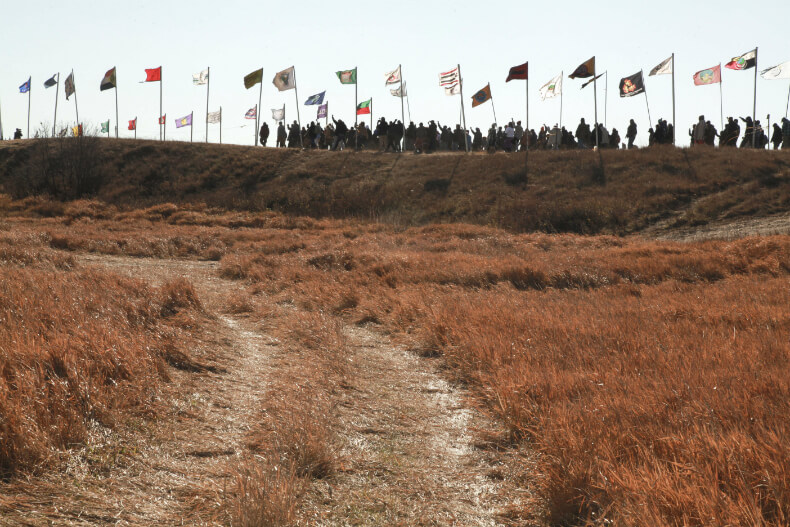 Further contributing to the conflict is the blatant discrediting of indigenous voices when they actually have the opportunity to contribute to the national narrative.

CNN, for instance, relied on a non-native man to tell the story. While the voices of allies and outside supporters are valuable to any narrative that centers on indigenous rights and concerns, when they replace indigenous voices they run the risk of doing more harm than good. Not only do those voices influence the direction of the narrative they help to determine public opinion and any subsequent response from state and federal agencies.

Much of the ability to get the word out on the mobilization at Standing Rock can be attributed to social media. Most notably, the Indigenous Environmental Network has made extensive use of facebook and twitter while maintaining an almost constant presence on the front line. Progressive news outlets, meanwhile, offer lists of activists to follow for updates—further proof that coverage of the crisis was lacking. 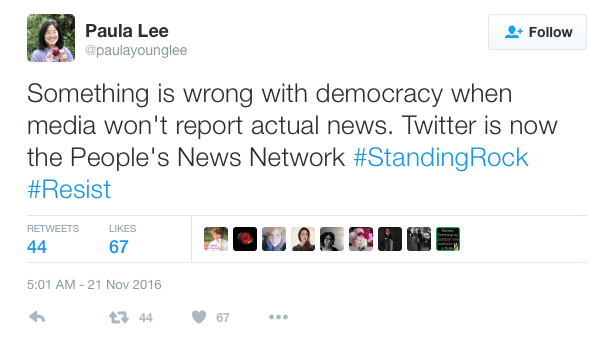 Although it is often criticized, in this instance, “slacktivism,” actually proved to be one of the largest driving forces behind this dire situation gaining deserved attention. A viral facebook status share also helped to gauge public support for protestors. Over 1 million people checked in at the Standing Rock reservation page in what was believed to be an effort that would ultimately confuse local police as they monitored check-ins. Despite a later statement that dispelled this rumor, the outpouring of support via social media reifies the power in the tool and the ways in which it can fuel a movement. Action by individuals continues to help drive support for the water protectors at Standing Rock, but this online work still remains sadly limited, failing to gain full traction in the national psyche.

Another interesting development in the Standing Rock narrative was the role of celebrities. Shailene Woodley has emerged as one of the well-known names associated with the protests, although her celebrity overshadowed the real issues at hand. Early reports of her engagement in the protests did consider some of the real issues, but they glossed over the details to provide more in depth coverage of her arrest. Her name did momentarily give the story presence with mainstream outlets, though it was mostly focused on the persecution of a star and not with the ongoing persecution of Native claims.

Now, in the wake of an election cycle that has polarized media coverage throughout the United States, the abuse of power at Standing Rock continues to go unnoticed. If not for a facebook live video feed by Kevin Gilbertt it’s possible that the mainstream media would have once again dismissed the increasingly violent police repression. Peaceful protestors have been blasted with water cannons, struck with tear gas, and attacked with concussion grenades. Yet, this story still goes largely uncovered. 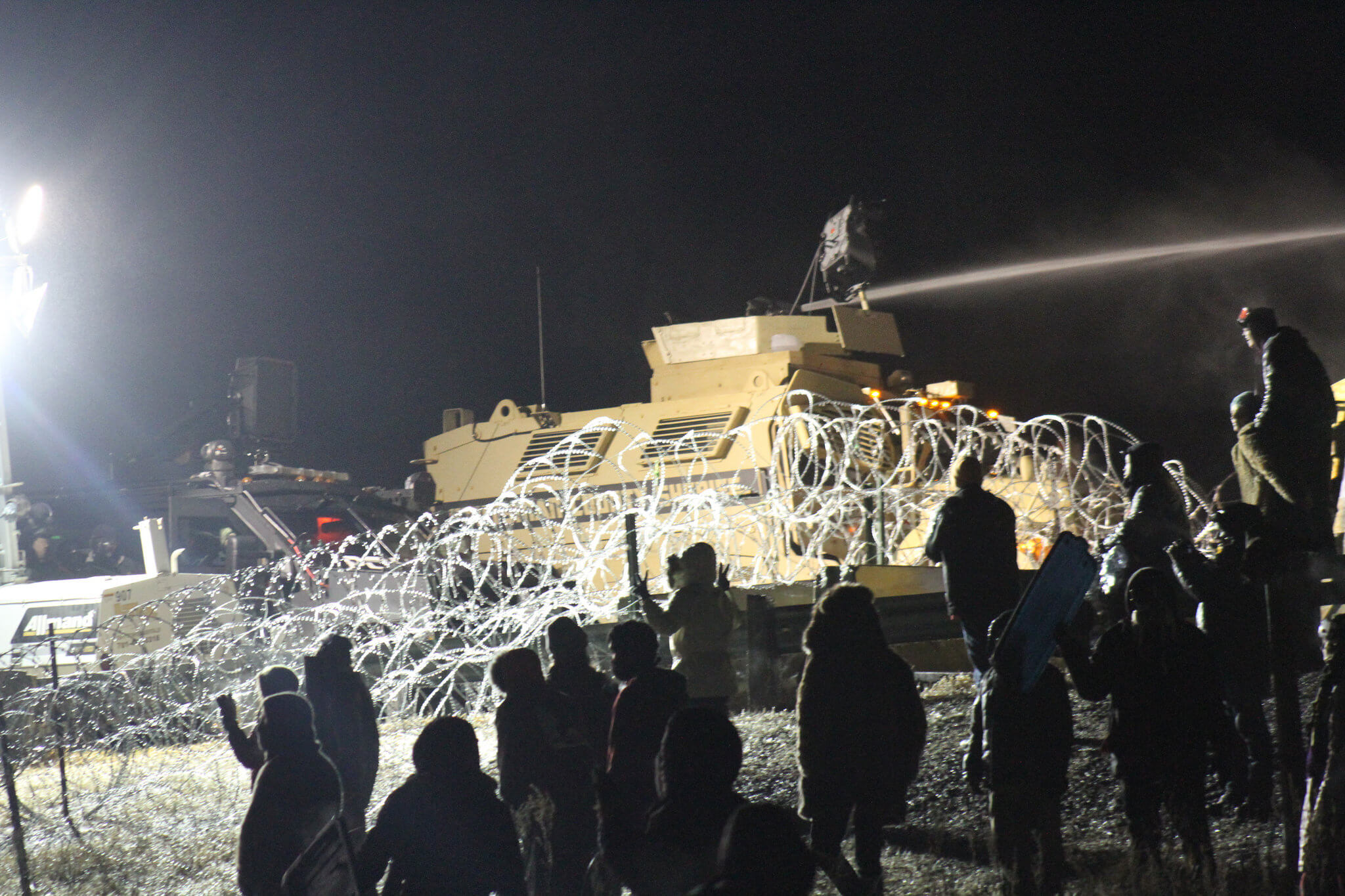 It’s fitting that a political figure, Bernie Sanders, is the one urging fellow politicians to denounce the violence at Standing Rock and fight the pipeline. But, Sanders appears to be the only mainstream player voicing such concern. With new election fallout breaking seemingly every hour, mainstream outlets will continue to carry electoral stories as opposed to the historical resistance at Standing Rock.

The work of activists is noble, but it will take large-scale action to bring the news of cruelty and injustice to TV sets and desktops around the country.

Media coverage of Standing Rock continues to be diminutive, and this fact is simply unacceptable. Though advocacy on social media did help to foster a community response and contingent of support for the protestors at Standing Rock, the lack of information and discussion in mainstream media outlets perpetuates the invisibility of Native nations in the United States.

This is not a coincidence. The media is complicit in a long history of keeping Indigenous Peoples out of existence and relegating their politics to the margins.

Nevertheless, the world will be watching as the Feds try to dismantle the camp at Standing Rock.

Meanwhile, a petition is circulating to urge CNN to provide 24-hour coverage of the situation. Water is life, say Native voices at Standing Rock, and this rings true for all of us. Invisibility is no longer an option.