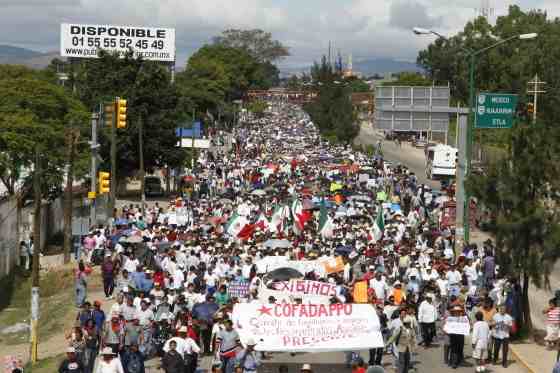 July seems to have been a heavy-handed month. Several governments brutally attacked protesters. Some corporations, perhaps for the first time finding a purpose for courts—began efforts to criminalize and silence their opposition, an effort supported by governments. And throughout this month, the world’s American Military Body has begun expanding considerably.

On the Other hand, the efforts of Indigenous Peoples have also increased. At least 2 dozen large-scale events occurred this month, from Summits and Conferences, to General Strikes and numerous days and weeks of action. Some new movements have also begun emerging, along with newly-founded efforts to reclaim traditional lands and restore Nations.

July 30
The inter-governmental effort to prohibit democracy – This is a companion list for Underreported struggles in July, a compilation of recent news about the criminalization of dissent and the arrest and oppression of activists around the world.

Six Nations to ‘step in’ on moraine – the Six Nations have stepped in to address another situation regarding the mis-use of lands within the Haldimand tract. This one located in the Region of Waterloo (which is itself part of the Haldimand Tract), and doesn’t look much like Caledonia. A Six Nations Rep said they don’t intend to stop the development projects, but they do require being consulted.

Malaysia’s indigenous battle to hold ancestral lands – The government claims ownership of all Orang Asli land, and insists they need not pay any compensation for using it. Many of the Orang Asli have been resettled ” to make way for highways, buildings, golf courses, and plantations.” State governments give them smaller farming lands and houses in return.

July 28
Algonquins sued for 77 million by Mining Company – The Algonquin First Nations occupying a proposed uranium mine site in eastern Ontario are being sued by the mining company, Frontenac Ventures Corporation, for $77 million dollars in damages, as well as a court order ending our protest and forcing us to vacate our land. In their Statement of Claim, which was served on our lawyer today, the company makes absurd and outrageous claims that we are “threatening” and “intimidating” them and their employees. In fact, our peaceful protest has been completely non-violent and non-threatening from the beginning.

July 27
PUBLIC TRIAL in Mexico City for crimes against humanity – August 3 and 4 there will be a “Grassroots Trial in the Zocalo of Mexico City against CRIMINALS ULISES RUIZ ORTIZ, VICENTE FOX QUEZADA, CARLOS ABASCAL, illegitimate president FELIPE CALDERÓN and all those who are responsible for committing crimes against the humanity of the people of Mexico.” You may recall, back in June 2006 Ulises Ruiz Ortiz (URO) was symbolically tried, sentenced, hung and burned in effigy by Section 22 (the Oaxaca teachers’ union), social organizations and the people in general. A week after this mock trial, URO sent in over 3000 state judicial police who went on to indiscriminately attack the unarmed people at the Zocalo.

July 26
Indigenous group ‘refused entry’ to McArthur River Mine site – A man claiming cultural ties to the McArthur River Mine (MRM) site says a group of women and children have been refused entry to sacred land by management. Jackie Green says about 25 people wanted to perform a cultural dance on land just inside the boundaries of the mine site yesterday, but were stopped at the gate. The group had a documentary film crew and a representative of the Territory Environment Centre with them.

Canada lost in court on Friday. Is Canada going to learn? – In a court ruling last Friday, a Canadian Federal Court sided with the Ka’agee Tu — saying that the Federal government violated the Ka’agee Tu’s right to “meaningful consultation” when in 2005, it approved an application for Paramount Resources to drill several new oil wells in the Cameron Hills area — Traditional hunting grounds for the Ka’agee Tu, and also a location of their drinking water. This decision is by all means a precedence that effectively requires Canada to consult Indigenous People before taking any action that would effect them. But is Canada going to respect it?

July 25
Satellite Monitoring Reveals Destruction of Indigenous Land – The land of Paraguay’s Ayoreo-Totobiegosode tribe is being bulldozed at break-neck speed, forcing the Indians to flee to the last remaining patches of forest. Many Ayoreo have been killed in previous encounters with outsiders. Ayoreo man Ojnai said, `All this land belonged to our ancestors, but the white men are going to take it all from us. I am very worried about the deforestation, because we don`t know where exactly the people still in the forest are living. I have a sister among them.`

Mesoamerican Organizations Strengthen Fight Against Dams – The 4th Mesoamerican Encounter of the Latin American Network Against Dams, and for Rivers, their Communities and Water (Redlar) took place in El Salvador. The meeting was aimed at strengthening the coordination and the alliances of the Mesoamerican movement against dams in the pursuit of community alternatives, to face the energy policies of the region and move forward in the construction of sustainable societies.

Jul 23
Guatemala: From Resistance to Power – Indigenous leader and presidential candidate Rigoberta Menchu said the Guatemalan indigenous movement is preparing to be elected for the presidency and lead the country. The Guatemalan national elections will be held next September 9th. In a rally held days ago, Maya-Quiche indigenous leader Menchu appropriated the watchword of indigenous peoples, which is “from resistance to power”. ‘Clearly, we have lost our fears, we will neither be passive observers of the elections nor will we be manipulated by politicians, we will be actors of our own fate’, Menchu said, according to Prensa Latina news agency.

Bolivia: massive march for national unity – At least one million people–more than two million, according to some sources–marched in El Alto, Bolivia, on July 20 to call for national unity and to oppose proposals to move the executive and legislative branches of government from La Paz, the de facto capital, to the southern city of Sucre. Although no government officials spoke at the demonstration, in the evening President Evo Morales called the mobilization “historic”; analysts considered it the country’s largest demonstration in recent years. The media nicknamed it the “Pacenazo” (from La Paz), while participants called it a cabildo (a public discussion, like a town hall meeting).

A movement of Tradition emerges in Venezuela – There was an important gathering in Caracas last week—Indigenous People from all over Venezuela came together for the First Meeting of Indigenous and Socialist Indigenous Warriors.

Help save Apache Sacred Sites from copper mining – Here’s an urgent online petition to help protect Apache Leap and numerous other Sacred sites from desecration by copper mining. The land in question is part of the ancestral lands of the sovereign Native Nations of the Apache, Yavapai, Hopi, and O’Odham.

July 16
Preparations for a united movement in Chile underway – On the weekend, several social, cultural and environmental organizations met in Chile to draw out an initiative to create a unified movement in Chile, who will explicitly work to change the current system towards one that is respectful to natural resources, social justice and cultural diversity.

July 14
Nepal’s Other Insurgency – An alarming, and unheralded, civil war is spiralling to intensity along the sweep of India’s open frontier with Nepal. Allowed to fester, it could torpedo the fragile peace plan taking shape in Kathmandu, unleash a cascade of refugees into Uttar Pradesh and Bihar, and present New Delhi the anathema of a un mission digging into its backyard. The erupted eye of this storm is an anarchic movement for self-determination by the plains people of Nepal.

July 13
Pygmy artists housed in Congo zoo – Human rights activists have criticised the organisers of a music festival in the Republic of Congo for housing pygmy musicians in a tent at a zoo. Other artists at the Festival of Pan-African Music (Fespam) are staying in hotels in the capital, Brazzaville. The organisers say the grounds of Brazzaville zoo are closer to the pygmies’ natural habitat.

Navajo Mine: Forced relocation of Navajos and toxic dumping – Dine Citizens Against Ruining our Environment (“C.A.R.E.”) and the San Juan Citizens Alliance were forced to take legal action against the Federal Office of Surface Mining (“OSM”) today over the agency’s approval of a massive mine expansion for the Navajo Mine. OSM’s decisions have already led to the permanent removal or relocation of numerous tribal members from their homeland and resulted in the permanent dumping of millions of tons of hazardous wastes.

July 10
Aymaras Don’t Want to Disappear – Twenty years ago, close to 100 indigenous Aymara people lived in the village of Cancosa, but today only 10 remain. The same is true of many indigenous communities in the Chilean Altiplano, as their members have moved out in search of jobs and educational opportunities. The community plans to change the situation through tourism and growing quínoa, a high-protein grain.

July 7
Hundreds Protest Over Land Disputes, Corruption In Southern Vietnam – Hundreds of people are camping out near a government building in southern Vietnam’s Ho Chi Minh City to protest alleged corruption and unfair compensation for their land, taken for infrastructure projects, police said Saturday. Protesters from nine southern provinces have converged since June 22th in front of the representative office of the lawmaking National Assembly

July 6
New Zealand – Wahi Tapu – A collective of Indigenous People in New Zealand began occupying and opposing a development on a Waahi tapu site known as Otuparae. The People went through all legal avenues before pursuing this course of action. So far, police raided the site twice: Arresting people, and humiliating some by making them carry a stack of chairs down the driveway.

GUAM: Landowners protest against the US military – Landowners in Guam’s Urunao district are protesting against access to their properties being blocked off by the US military. With eight-thousand marines relocating to Guam from Okinawa over the next couple of years, the landowners fear being denied access to their ancestral lands or having them confiscated for military housing.

Plight of Indigenous Fijian Landowners Now Being Addressed – Interim Prime Minister Commodore Frank Bainimarama has stressed that the plight of the Indigenous Fijian landowners is now being addressed following the return of the 38 acres of ancestral land to the mataqali Rara today. Commodore Bainimarama said all the issues being raised by the landowners will be addressed to ensure that the country moves forward. However, the Interim Prime Minister has reiterated that no racist policies will be promulgated to split the different races in the country.

Petition for the Restoration of the Maasai Nation – Anglo Maasai Treaties has violated our rights to lands and natural resources thus minimizing our chances of surviving any kind of change. Keeping our normal lifestyle isn’t either an alternative since we do not own any land neither do we have resources to buy any while our population is expected to rise. The lands were sequestered to British ex servicemen and mobility. [This Petition is a request to the] president to recognize our plight.

July 3
Land Recovery in Bolivia – Today, the Chiquitano People received land titles in perpetuity for the territory of Monte Verde, after 12 years of struggle on part of the Chiquitano. The territory, located in Southeast Bolivia near the Brazilian Border, is approximately one million hectares in size.