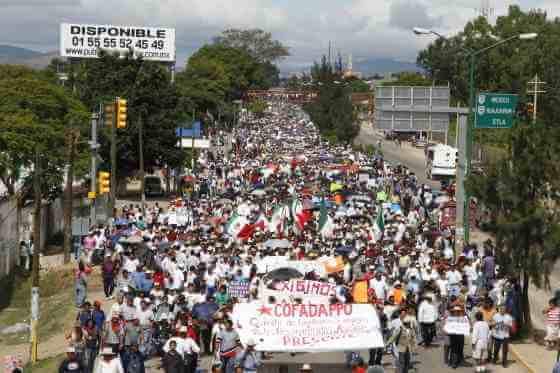 PUBLIC TRIAL in Mexico City for crimes against humanity

August 3 and 4 there will be a “Grassroots Trial in the Zocalo of Mexico City against CRIMINALS ULISES RUIZ ORTIZ, VICENTE FOX QUEZADA, CARLOS ABASCAL, illegitimate president FELIPE CALDERÓN and all those who are responsible for committing crimes against the humanity of the people of Mexico.”

You may recall, back in June 2006 Ulises Ruiz Ortiz (URO) was symbolically tried, sentenced, hung and burned in effigy by Section 22 (the Oaxaca teachers’ union), social organizations and the people in general. A week after this mock trial, URO sent in over 3000 state judicial police who went on to indiscriminately attack the unarmed people at the Zocalo.

Seven months have passed since the deadly alliance of the fascist parties PRI & PAN unleashed the most ferocious and bloody repression within living memory in the state of Oaxaca. People are being punished for demanding the removal of Governor Ulises Ruiz Ortiz who came to power through the most fraudulent elections in the recent history of the state. Having stolen the election, he then abolished constitutional rights and violated the human rights of the majority of the population, violations condemned by international human rights organizations whose findings have been ignored so far.

The 14th of June and 25th of November 2006 will remain engraved in the memory of the people of Oaxaca and Mexico as dates when the forces of repression of both state and federal governments tried to drown in blood an unarmed people demanding justice. 350 women and men, young and old, were arrested, then tortured and in many cases raped in high security prisons. More than 60 people were murdered, 50 were disappeared and 500 activists are now being hounded with arrest warrants.

Despite this brutality, the Asamblea Popular de los Pueblos de Oaxaca (APPO) not only survives but is extending its power across the state. It is preparing to launch a new battle against the impunity of the governments of PRI and PAN behind which they are trying to hide their many crimes against the people of Mexico and their affront to the people of Oaxaca.

We call on
– The people of Mexico
– Our sisters and brothers in Agua Fría, Aguas Blancas, Acteal, Atenco, Sicartsa
– The relatives of the miners of Pasta de Conchos, of the murdered women of Ciudad Juárez and of Ernestina Asensio who was gang-raped in Songolica Veracruz, The Other Campaign, the National Democratic Convention, APPM, the trade unions, international human rights observers …
– The power of international solidarity

JOIN US ON 3 & 4 AUGUST 2007 for a GRASSROOTS TRIAL in the ZOCALO OF MEXICO CITY against CRIMINALS ULISES RUIZ ORTIZ, VICENTE FOX QUEZADA, CARLOS ABASCAL, illegitimate president FELIPE CALDERÓN and all those who are responsible for committing crimes against the humanity of the people of Mexico.

We call on all organizations in Oaxaca and nationally, and on people all over the world to participate in this grassroots trial to witness and to judge, or to hold actions wherever they are, so that this trial becomes an INTERNATIONAL ACTION AGAINST IMPUNITY ANYWHERE.

*Send international observers and support messages to the Public Trial. Write as an individual and/or get your organization, church, elected official to write. Statements should be sent to CODEP (Comite de Defensa de los Derechos del Pueblo – the Committee for the Defense of People’s Rights) codep_cnpp_oax@yahoo.com.mx and to the Global women’s Strike philly@crossroadswomen.net which will forward them.

* Organize a local action on Aug 3/4. Call a demonstration or protest in your area. Circulate this leaflet. Please let us know what you are doing so we can let people in Oaxaca know.

* Write or call your Representative/Member of Parliament and ask them to issue a resolution against human rights violations in Oaxaca. In Britain, MPs have issued Early Day Motion 1828 (see below). If you live in Britain, ask your MP to sign the EDM so it continues to circulate.

* In Europe, sign the Letter to the European Parliament which we hope to present in September (see below).

* Raise it with your trade union, women’s or other organization and ask them to pass a resolution and/or send money to support the teachers and the indigenous communities they work with.

* Make a donation. Money for the injured and imprisoned is desperately needed. The hospital and other costs arising from the repression are very great. In February we sent $1000 to the family of a compañero Marcos who had been shot by police and was fighting for his life. Many more have been injured since and we want to be able to send money every month. You can donate online via the Global Women’s Strike click here. (Under “Payment For”, please enter “Women in Oaxaca”) To send a donation in US dollars make checks payable to Global Women´s Strike, PO Box 11795, Philadelphia, PA 19101, USA; in Euros send cheques to Centro Las Mujeres Cuentan, Radas 27 Local, 08004 Barcelona, España or to the account of Huelga Mundial de Mujeres, Caixa Penedes, IBAN: ES94 2081 0249 50, 3300003442, Barcelona. Please write Oaxaca in the memo line of the check. All the money will go directly to women in Oaxaca.

*Circulate this information as widely as possible. Please forward this email to your networks. The 30 min. DVD Oaxaca: March for Justice , produced by the Global Women’s Strike, will be available shortly.