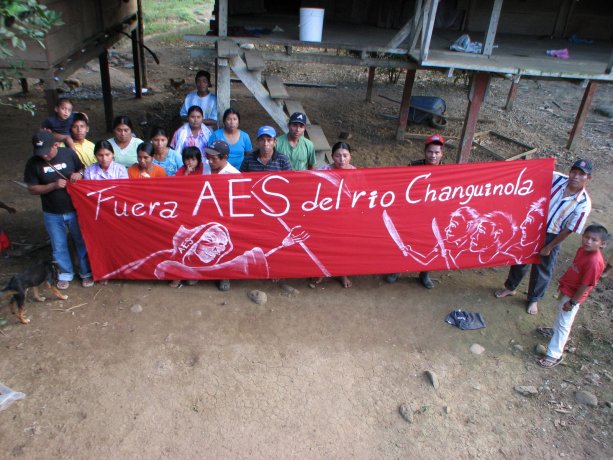 The US company Allied Energy Systems (AES) is trying to get funding from the UN’s Clean Development Mechanism (CDM) for the Chan 75, a hydro project in Panama that threatens to displace more than 1,000 indigenous Ngobe from their lands, and cause significant destruction to the environment.

Panama’s Alliance for Conservation and Development (ACD) explains in a recent article, “The dam’s construction is currently taking place in the Palo Seco Protected Forest within the La Amistad Biosphere Reserve, in the Bocas Del Toro region of Panama. Yet the Chan 75 project does not comply with the guidelines of the World Commission on Dams. The construction threatens the La Amistad International Park, a UNESCO World Heritage Site shared by Panama and Costa Rica, and part of the Mesoamerican Biological Corridor. Earlier this year, BBC News reported the discovery of three new species of amphibians on the Costa Rican side of the Park, very close to the border with Panama. The dam will most likely cause the extirpation [local extinction] of all of the major migratory aquatic fish and shrimp species from the La Amistad, and will negatively affect populations of jaguars, tapirs, and harpy eagles.”

“The dam also violates the human rights of Panama’s indigenous Ngöbe population. The Panamanian environmental agency, La Autoridad Nacional del Ambiente (ANAM), approved the construction without the free, prior and informed consent of the affected Ngobe. The dam will result in the complete relocation of more than 1,000 Ngöobe subsistence farmers, and the destruction of their unique lifestyle.”

The Ngobe have been vigorously attempting to resist the hydro project, and have been met with numerous aggressions and deceitful tactics from the company, the local police, and the National government.

In early April the Ngobe wrote an urgent plea for international support, which illustrates some of what they’ve faced. They said, “the National Police through a Riot Control Unit beat, threatened and dragged children, pregnant women and elderly people of the community, publicly stripped nude Ana Castillo, and then dragged and beat her through the streets, threatened Francisco Santos with death, forced community members with armed guards to sign documents whose content they did not know, set fire to the house of Isabel Becker and caused deadly injuries to the boy Ivan Miranda due to a police baton blow to the face.”

Isabel Becker and two of her family members also tell a story about how “AES employees in Panama City badgered [Isabel] to relinquish the rights to her land, holding her in a meeting room for more than 12 hours.” Then, after midnight, “she affixed her thumbprint to a document surrendering the rights to her property in return for $9,500, plus a $100 monthly payment that will continue until Becker has established a new farm to feed her family.” The document was exclusively written in Spanish, which Isabel cannot read or write.

According to Cultural Survival, a Ngobe man in Charco la Pava was similarly coerced into signing a contact with AES. “The company told him the agreement was for them to do a study; instead, they bulldozed his farm, leaving destitute the 25 people who depended on that food. Moreover, the contract was in Spanish, which he does not read. These kinds of techniques are still regularly taking place-four families have had their land obliterated without even the pretense of contracts. Moreover, they have stepped up the construction work, building two light towers so that the work can go on around the clock…”

Adding all this together, Oscar Reyes of Carbon Trade Watch, a project of the Amsterdam-based Transnational Institute, points out that the “CDM is being treated as a subsidy stream for environmentally destructive projects” like the Chan 75. “It risks a lose-lose scenario, where the people and environment of Panama are threatened by a project that would allow industries elsewhere to continue polluting.”

Photo from backtobocas.blogspot.com. Thanks to Oscar for the heads up.