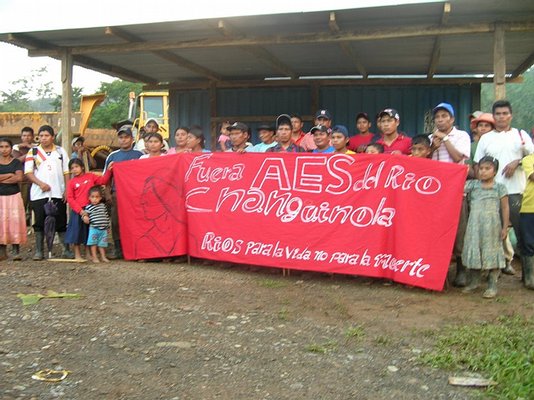 Ngobe: We are desperate and abandoned

Earlier this month, the Ngobe of western Panama wrote an urgent appeal that asks the international community for immediate assistance. For some time now they’ve been struggling to stop the US-based company AES from building the Changuinola dam on their traditional lands.

In recent months, the situation has become hopeless for the Ngobe. According to the appeal, the National Police have taken over their community and they are “being subjected to cruel violations of our fundamental human rights.” On top of that, the government has un-communicated them from the world; and they are quite literally being forced to sign away their lands, rights, and livelihoods — “under threat of arms and death.”

Meanwhile, according to Cultural Survival’s latest newsletter, AES has started using lights to work on the Changuinola dam around the clock.

The Ngobe say, “We are desperate and abandoned. The government reiterates that we have no rights, and that they have the power to do as they wish… We ask, please do all in your power to stop this barbarism. Our lives and land depend on being able to stop these violations.”

Cultural Survival has set up two things you can do:

1. Send a letter to persuade Panama’s environmental agency, ANAM, which commissioned AES-Changuinola to build the dam, to halt construction and set up a process that guarantees that the Ngobe peoples’ human rights, now and in the future, are respected.

2. Sign a petition which makes a similar plea to ANAM

3. Global Response also put together a list of contacts for AES. Feel free to write them too.

We send this letter as an urgent plea for international support and help. The Ngäbe located in the community of Charco La Pava, District of Changuinola, Province of Bocas del Toro, Republic of Panama, are being subjected to cruel violations of our fundamental human rights. The community has been taken over by the national police, whom have proceeded to repeatedly use deadly force against us, torturing community leaders, abusing us through physical and verbal agressions, destroying our property, land and homes, and controlling through violence all aspects of our daily life.

The Company AES Changuinola, which wishes to develop a Hydro-electric plant in the Changuinola River, the contractor company of swedish origins CCW (Changuinola Civil Works), in complicity with the governor of the Province of Bocas del Toro, Esther Mena Chiu, of the Mayor Virginia Abrego, regional ANAM representative Valentin Pineda, have all participated directly in the violation of our human rights, dignity and humanity. AES Changuinola personnel involved are area responsible Engineer Thais Mejia, as well as Rodolfo Ayarza, Beanvides Morales y Lidami Morales. The National Police has worked through the National Police Unit, Zone 9 of Changuinola, under the orders of Jose Maneul Rios.

Among the examples of human rights violations: the National Police through a Riot Control Unit beat, threatened and dragged children, pregnant women and elderly people of the community, publicly stripped nude Ana Castillo, and then dragged and beat her through the streets, threatened Francisco Santos with death, forced community members with armed guards to sign documents whose content they did not know, set fire to the house of Isabel Becker and caused deadly injuries to the boy Ivan Miranda due to a police baton blow to the face.

The Company AES Changuinola together with the National Government, and under the armed vigilence of police officers, imposed two alternatives: accept 2 thousand dollars as payment for each hectare of land (which equals to 20 cents per square meter), or be evicted by force on the first week of April of 2008. We are being forced to negotiate under threat of arms and death.

We are desperate and abandoned. The government reiterates that we have no rights, and that they have the power to do as they wish.

They have us uncommunicated and dont let anyone visit the community. They have tortured, evicted and threatened to death our leaders, have destroyed our lands, forests and animals which are the source of food for our people. We live in constant fear because there is no law that protects us in these places.

We ask, please do all in your power to stop this barbarism. Our lives and land depend on being able to stop these violations.

Ngöbes Communities affected by the construction of the Hydro-electric plants. we extracted this information from the declarations made by Ana Castillo done on the 9th of March of 2008.

1 Mrs Castillo and her sons, 12 year old Anselmo Santos, 10 year old Didier Santos and 6 year old Irene Santos, went where most of the communisty was protecting itself from the explotions, when they were violently supressed, as Mrs Castillo narrates: “my kids and I went to where the others were at the entrance to the community asking the AES employees to please not to harm their crops, when by orders of Engineers Rodolfo Ayarza and Lidami Morales, the police hit and kicked me, they grabbed me by my hairs, they hit my children with their baton, I only wanted them not to harm my crops”.

2 “When I was on the floor the police stepped on my chest with his boot while he laughed”.

3 “One police officer grabbed my clothes and laughing tore it off, he stripped me naked publicly, and dragged me naked to the police quarters. Everybody saw me naked and I felt embarassed”.

4 Mrs. Ana Castillo was verbally abused, stripped nude, beaten and exposed to the public by the National Police Units, Zone 9 of the Changuinola Police headquarters, under the order of police chief Jose Manuel Rios. Once detained in the Police quarters, Mrs. Castillo was again verbally abused, threatened and admonished by the police units, and as she narrates: “in the police quarters I wanted water, and cried together with my children. The police told me: you are stupid and rude..what rights are you going to demand? You have no rights, next time we will take everything by force. You want water? Then he laughed and hit me and didnt give me water, when I spoke I was beaten, and told me I had to sign”.

5 The minors, 12 year old Anselmo Santos, 10 year old Didier Santos and 6 year old Irene Santos, whom accompanied their mother, were detained and beaten next to their mother by the National Police. “the police in the quarter would ask my child if he wanted to eat and would then laugh, indians like you have no rights”.

6 “I dont want to see the police, I live here, all our forefathers lived here, if they take me out of here I dont know where I´ll live, I only have this land, when I bathe in the river the police look at me, I want them to leave”.