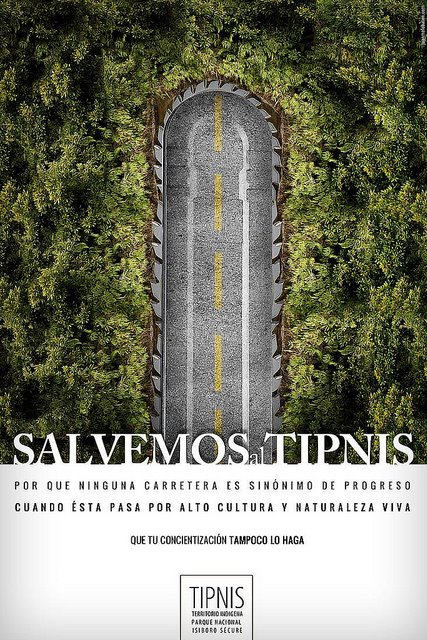 Show your support for the Indigenous Peoples of TIPNIS!

Poster from "Salvemos al Tipnis" on facebook
Support our journalism. Become a Patron!

Show your support for the Indigenous Peoples of TIPNIS! Avaaz.org has sponsored a petition in support of the ongoing march to defend the Isiboro Sécure Indigenous Territory and National Park (TIPNIS) in Bolivia.

If you haven’t already signed the petition, please do so now! Visit: http://www.avaaz.org/en/save_tipnis

Since August 15, 2011, Indigenous Peoples from the TIPNIS have been marching against a new highway that the government of Bolivia wants to build through the protected territory.

So far, more than 1,500 people have joined the 375-mile journey from the eastern lowlands of Bolivia to La Paz–a number that’s growing by the day.

Sadly, President Evo Morales has responded to the march by labeling the protesters “enemies of the nation.” He is also trying to discredit the protesters by portraying them as being confused by NGOs. He even tried to denounce the march as another strategy of US imperialism.

As of late, this misleading rhetoric has turned into action. According to NACLA,

“The government has sent in 450 federal police for the stated purpose of avoiding a confrontation. Rather than guarantee the marchers’ safe passage, the police have prevented them from advancing and, according to news reports, have impeded their access to water, while the colonists have blocked delivery of other supplies. The colonists contend, and the government agrees, that some of the indigenous groups’ demands ‘violate their rights,’ and should be dropped before the march is allowed to proceed.”

At this point, there’s no telling what will happen next. Sufficed to say, the international community should be on alert for the worst possible outcome.

UPDATES
For news and updates on the situation, visit: IsiboroSécure, TIPNISResiste, SomosSur, Fundación Tierra, CIDOB, and CEJIS and Bolivian Thoughts.

TIPNIS: Territory and Dignity, a moving documentary from Claudia Fernandez and produced by environmental organization FOBOMADE, gives voice to the Indigenous Peoples of the Isiboro Sécure Indigenous Territory and National Park (TIPNIS) in Bolivia.