Bolivia: Indigenous peoples mobilize against highway through the rainforest

Indigenous peoples in the eastern lowlands of Bolivia are set to begin a 600-km march to Bolivia’s capital city to protest plans for a new trans-oceanic highway that would cut through the Isiboro Sécure Indigenous Territory and National Park (TIPNIS). More than 300 delegates have already gathered for the march, which begins today, August 15.

“The decision to mount the protest march follows the breakdown of talks between the Confederation of Indigenous Peoples of Eastern Bolivia (CIDOB) and the authorities in charge of the road project, which will affect [the TIPINIS] a vast area between Beni and the central province of Cochabamba that is rich in biodiversity and where coca leaf cultivation is expanding,” reports IPS News. In part, CIDOB was demanding respect for the legal status of the TIPNIS as an indigenous territory.

The Isiboro Sécure National Park was established in 1965 by Supreme Decree 7401, in order to protect roughly 1,000,000 hectares or rainforest. Unfortauntely, the degree failed to regonize the land rights of some 15,000 Indigenous Peoples who live in the area. This “oversight” led to a protracted struggle that went on for 25 years, when the government finally agreed to recognize the park as an indigenous territory. It did so through Supreme Decree 22610. Bolivia’s landmark 2009 Constitution took the status of TIPNIS one step further by combining environmental protection with the autonomy of the Yuracaré, Trinitario and Chimán peoples.

However, that same year, 2009, Bolivian president Evo Morales and former Brazilian president Lula da Silva also agreed to build a new highway through the TIPNIS between Villa Tunari and San Ignacio de Moxos. The new highway would ultimately link the Brazilian provinces of Rondonia and Mato Grosso with harbours on Chile’s Pacific coast, providing Bolivia with “a commercial link between the central department of Cochabamba, gateway to the Andean highlands, and the Amazonian Beni region” reports NACLA. 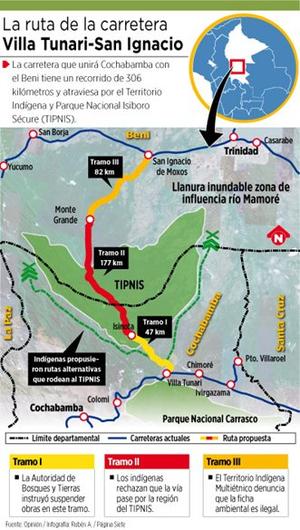 Proposed highway route. Photo: Pagina Siete“The road will also connect indigenous residents of the TIPNIS with the modern world, providing opportunities for expanded or new community enterprises such as sustainable forestry and ecotourism. But for community leaders of the TIPNIS and their supporters, the road threatens to destroy one of the most biodiverse regions of the world, with unique flora and fauna including 11 endangered animals and 3,000 species of plants.”

NACLA adds, “A recent study predicts that within 18 years of the road’s construction, 64% of the TIPNIS will be deforested. YFPB, the state hydrocarbons company, has just announced its interest in exploring important petroleum reserves inside the park, posing an additional environmental threat which the road will greatly facilitate.”

Adrián Nogales, the director of the national park service who opposes the government’s plan, says the road will cause “the greatest ecological destruction in Bolivia’s history.”

In addition to the environmental impacts, the road would pave the way for major negative social and cultural changes on the Yuracaré, Trinitario and Chimán.

For that reason, the Indigenous Peoples, who refer to threat as “ethnocide in the twenty-first century“, say they are prepared to use “bows and arrows” to stop the project.

“The Aymara indigenous organization CONAMAQ also held a protest in La Paz in solidarity with the CIDOB march,” notes the WW4 Report. “CONAMAQ leader Rafael Quispe accused Bolivia’s President Evo Morales, who has been outspoken on environmental issues, of hypocrisy. ‘Morales isn’t a defender of Mother Earth,’ he told the Associated Press. ‘His rhetoric is empty.'”

Rainforest Action says, “The indigenous peoples are calling on all domestic and international human rights organizations to stand with them in solidarity. Please support the people of Bolivia and write to the Bolivian president, Evo Morales. We will be presenting the signatures to the Bolivian ambassador in Berlin soon.”