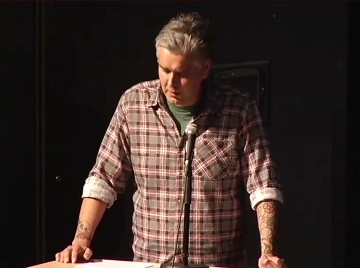 An insightful and politically-charged lecture by Dr. Glen Coulthard on “Recognition, Reconciliation and Resentment in Indigenous Politics.” This lecture was held on November 16 at the Goldcorp Centre for the Arts, 149 West Hastings Street, Vancouver, BC.

Dr. Glen Coulthard is an assistant professor in the First Nations Studies Program and the Department of Political Science. Glen has written and published numerous articles and chapters in the areas of contemporary political theory, indigenous thought and politics, and radical social and political thought (marxism, anarchism, post-colonialism). His most recent work on Frantz Fanon and the politics of recognition won Contemporary Political Theory’s Annual Award for Best Article of the Year in 2007. He is Yellowknives Dene First Nations. Contact Dr. Coulthard here.

You may also want to read: Subjects of Empire: Indigenous Peoples and the ‘Politics of Recognition’ in Canada by Dr. Coulthard (2006)