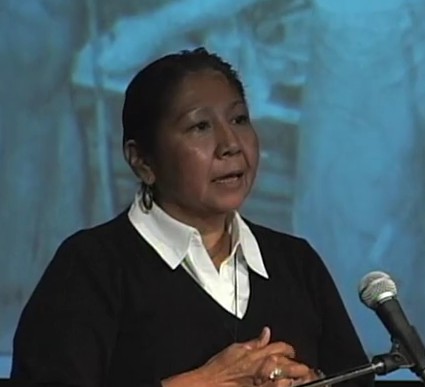 Debra Harry is Northern Paiute, from Pyramid Lake, Nevada. She is the Founder and Executive Director of the Indigenous Peoples Council on Biocolonialism, a U.S.-based non-profit organization that assists Indigenous peoples in the protection of their genetic resources, Indigenous knowledge, and cultural and human rights from the negative effects of biotechnology.

On October 6, 2010, Debra spoke at the Fairhaven College in Washington on the topic, “Asserting Self-Determination Over Cultural Property: Moving Toward Protection of Genetic Material and Indigenous Knowledge.”

In the context of globalization and diminishing natural resources, there is an increasing number of unscrupulous scientists, well-intentioned NGOs, careless governments and bizarrely-anxious bio-tech firms attempting to use cultural property or simply sell it in the global market with little regard for the consequences.

In response to these efforts–what is commonly termed “biopiracy”–Indigenous Peoples have attempted to assert the principles of self-determination to regain and preserve what can only be theirs. For instance, the Havasupai and Yanomami Peoples, who’s blood samples were used in unauthorized experiments; the Atayal who’s genetic material was patented without their consent; and the Karitiana, who’s DNA was being sold on the Internet.

There are, perhaps, more than a thousand other cases of biopiracy if we include all forms of cultural property; not just blood and DNA but also medicine plants and cultural practices like Yoga and bungee jumping as well as heritage objects, burial remains, sacred sites, and the unique conceptual frameworks and knowledge systems that were developed over thousands of years.

During her talk, Debra examines a few of these cases and discusses the fundamental conflicts between Indigenous worldviews and market-based values that justify the patenting and selling of anything in the natural world.

Finally, she critiques how international forums, including the Convention on Biological Diversity and the World Intellectual Property Organization are adopting new global standards to protect cultural property and promote true conservation and the sustainable use of biodiversity.