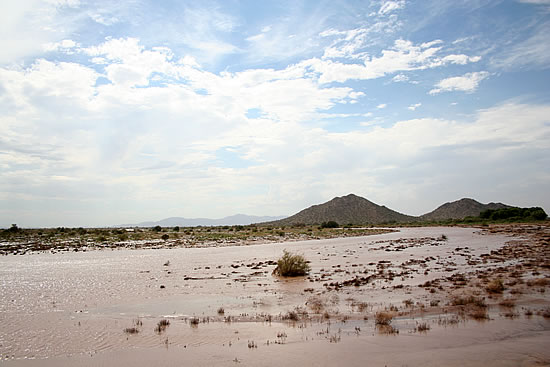 Lori Riddle, Akimel O’odham citizen and founder of Gila River Alliance for a Clean Environment (GRACE), recently began sending out alerts that the Vancouver-based company Curis Resources may be just weeks away from getting a green light from the Arizona state government for their proposed In-Situ copper mine in Florence, which borders the southern edge of the O’odham Gila River Indian community.

A Summary on the proposed Curis Copper Mining Project that Riddle is distributing, outlines the known environmental risks of the mine:

Riddle, who points out that her community just won a long court battle over their water rights, also expresses concern about several claims that Curis has made. For instance, during two meetings by the Natural Resources and Cultural Resources Committees, Curis indicated “that they had met with many Community Government Staff Members to discuss the project;” however, Riddle says:

“Staff and Community Management who would normally be contacted about this kind of project who were present in the audience appeared quite surprised by these statements and you could see them emailing to find out if these meetings had somehow occurred without their presence. At one point after the presentation one of the Community Managers rose to indicate that in the people Curis cited meeting with had very little relation to this type of project and some were not even working for the Community anymore. This really made me question Curis’s trustworthiness.”

Incidentally, the major shareholder in Curis is Hunter Dickinson Inc. (HDI), a name that the Tsilhqot’in Nation in British Colombia know all too well. HDI owns Taseko Mines Ltd., the company behind the repulsively named prosperity mine project.

Another big concern was Curis’ effort “to avoid all discussion of water contamination [focusing instead on the issue of] preservation of our cultural resources.” Curis said during the meeting 59 sites on their property but that there is nothing to worry about, because they would do everything they could to avoid disturbing the sites; “but,” Lori response, “I was really left thinking, ‘doesn’t the law require that anyhow?‘”

“At one point a Curis employee said ‘we will be there onsite at all time, but I can’t say we are not going to penetrate any pottery’. There were noticeable gasps amongst Community members and others in audience. ”

[…] They also talked about something I had not heard before but should be of a concern because of our water settlement. They said that they would be ‘extracting more water than they are injecting’ so I guess they will also deplete our water source.

They suggested that monitoring the site 24/7 would be a protective measure. Someone at the meeting said that monitoring will not stop the pollution from occurring it will just make us know that it has happened after the fact.

They made some remarks that once again got gasps going in the audience stating that they would ‘much rather have the tribes handling human remains’. Again I think we all kept thinking ‘this is the law you are not doing us some favor here by saying you will follow it‘.

Again our leaders were well prepared with many questions and making statements like “you can’t give us a guarantee that there will be no leakage” and “coming to us after the fact (within 2 months of getting permits) is not appreciated and that is putting it lightly”. The Committee, wisely, voted unanimously to recommend that Council oppose the Florence Copper Project.

Opposition to this project is widespread, as the briefing also notes: “8 separate private landowners owning more than 18,000 acres in the surrounding area, two private water utility companies, thousands of local residents, Pulte Homes, and the Town of Florence have all expressed the opposition to the project because of the grave environmental risk.”

However, despite the opposition–which is likely going to grow–Curis is pushing on. As of this moment, the company is awaiting a decision from the Arizona State Government.

In the not-so-distant background, another Canadian mining company is threatening O’odham cultural sites and, possibly, their water. As the New York Times reported last month, Rosemont Copper, a subsidiary of Canada’s Augusta Resource (also based in Vancouver), wants to start a new open-pit copper-molybdenum-silver mine and mineral processing facility southeast of Tucson, Arizona. A total of 60 O’odham sacred sites, including some with human remains, would be disturbed or destroyed by the project.

Meanwhile, Ofelia Rivas, founder of O’odham Rights Cultural and Environmental Justice Coalition and O’odham VOICE Against the Wall, reports to Intercontinental Cry that the US-owned heap leach gold mine near the site of Quitovac in Sonora, Mexico, has been seemingly abandoned. Rivas reports that most non-O’odham who were living in the community have “moved away with their money”.

At the moment, however, the biggest concern is with Curis, who seems to think they’ll be getting “full permits” some time in May, 2012. It doesn’t seem likely since the company has not received an EPA or ADEQ clearance, but in the off-hand chance that they could, Riddle is urging people to take action.

She states, “Please help by contacting the agencies at the bottom and tell them to leave the water alone, no In-Situ mining! Your support is greatly appreciated!”

If you want to make your voice heard please send an email expressing your concerns to: