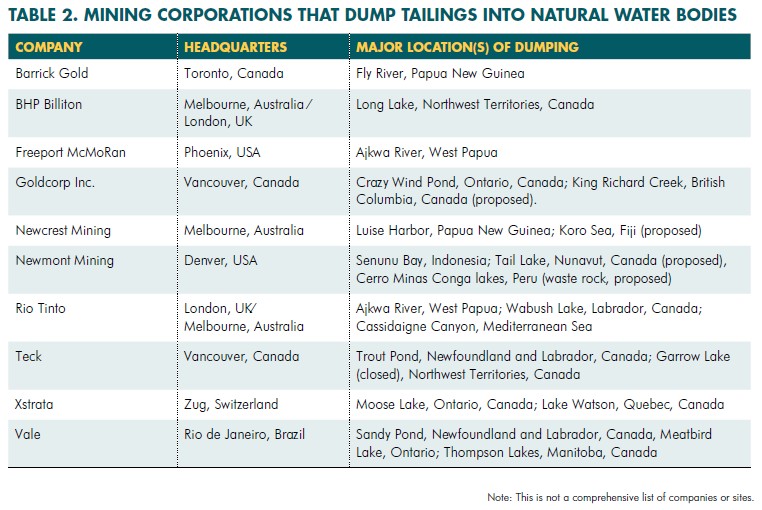 Troubled Waters: How mine waste is poisoning our oceans, rivers and lakes

An investigative report from Earthworks and MiningWatch Canada exposes how mining companies around the world use rivers, oceans, and lakes as private dumping grounds for toxic mine waste.

The report, Troubled Waters: How Mine Waste Dumping is Poisoning Our Ocean, Rivers and Lakes, identifies several bodies of water that are suffering or at great risk from the dumping of mine waste.

As noted in the report, released in late February, each year mining companies introduce more than 180 million tonnes of hazardous mine waste into water systems, contaminating them toxic heavy metals and chemicals including arsenic, cadmium, lead, mercury, cyanide, sulfuric acid and radioactive materials.

Despite technological advances in the field of mineral exploitation, there are still no viable solutions to the problem of disposal or remediation of that waste. Nor is there “Feasible technology… to remove and treat mine tailings from oceans; even partial cleanup of tailings dumped into rivers or lakes is prohibitively expensive,” the report states.

There is considerable potential in bioremediation (mycroremediation, phytoremediation) which utilizes the natural abilities of fungus, micro-organisms and plants to remove pollutants; but there needs to be more exploration and research before it can be fully utilized. There is also some controversy that appears to be falling under the radar of environmentalists. There are efforts to bio-engineer (specialize) and patent anaerobic bacteria for use in cleaning up heavy metal waste.

“There is but one workable solution: Mining companies must stop dumping into natural bodies of water,” the report observes. According to Earthworks a far more rational alternative would be for mining companies to simply place the waste back into the emptied mine.

As it stands right now “only one major global mining company (BHP Billiton) has adopted policies rejecting dumping in rivers and the ocean and no major companies have policies in place to protect lakes from mine waste dumping.”

The mining industry must share the collective responsibility to protect water and aquatic ecosystems, and the communities that rely on them, especially since mining produces such large quantities of toxic waste. Tailings have destructive impacts on natural water bodies and the ecosystems and people dependent on them. Companies and governments must adopt a precautionary approach to disposal of tailings and ensure that mining operations do not place tailings or other mine waste into natural bodies of surface water, including rivers, streams, lakes, wetlands, and intertidal, estuarine, and marine ecosystems.

[…] For too long, mining operations have used our oceans, lakes, rivers, and streams as dumping grounds for their wastes. This is no longer a tenable option. In order to protect community and ecosystem health, mining companies must end the practice of dumping into natural water bodies. We simply cannot afford to lay waste to the planet’s most precious resource: water.