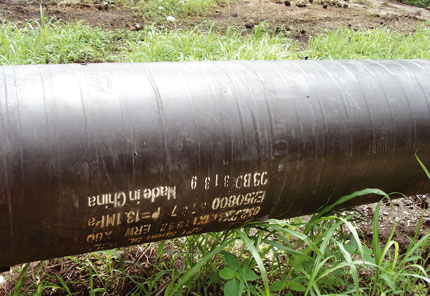 With the new draconian measures in place, Basamuk Bay in PNG can now be filled with mining waste via this pipeline. Photo by Chris Richards
Support our journalism. Become a Patron!

Indigenous Landowners have been stripped of their Constitutionally-protected land rights by the government of Papua New Guinea (PNG).

Without any warning or consultation, on 27 May 2010, the government of PNG introduced emergency legislation that dissolves the Constitutional rights of all landowners in PNG, including the right of Indigenous People to own land, challenge resource projects in court and receive any form compensation for environmental damage.

“The legislation was passed by Parliament without anybody being allowed to see the Bill before it was presented”, comments ACT NOW!, an independent organization based in PNG. “Nobody was allowed to read or comment on the text. There was no scrutiny by a Select Committee and not even a Parliamentary debate.”

The driving force behind the legislation and its secrecy–like pretty much every draconian measure ever introduced into law–is “National Interest.”

According to the Act’s Preamble:

“The law is being made in light of the recent court decision that has exposed resource projects to the risk that any permits granted by the state in satisfaction of legal and scientific requirements may not be enforceable… all major mining and petroleum resource projects (such as [Exxon Mobil] LNG) are particularly at risk affecting the economy and therefore a matter of national interest.”

The recent court decision referred to in the act concerns the Chinese-owned Ramu nickel mine in Madang Province.

The mine has been met with a great deal of resistance by local indigenous landowners because of its submarine tailings disposal plan that would dump more than 100 million tons of tailings waste into Basamuk Bay. The Indigenous landowners fear the waste would eventually destroy their traditional livelihoods along with the environment.

A secret report commissioned by the PNG government recently confirmed these fears. According to Ramu Nickel Mine Watch, the unpublished report “says the mine waste will not lie dormant on the sea floor, as claimed by the Chinese State owned Ramu mine, but will be widely dispersed in the Vitiaz Strait, notably towards Madang and Kakar Island and across Astrolobe Bay.”

Sadly, with this new law in place, the Landowners’ fears might as well be promises from the PNG government and the China Metallurgical Construction Company. In effect, the company is now free to dump its waste into Basamuk Bay with impunity. They don’t even have to worry about getting fined.

ACT NOW! is inviting the public to send an email to the Prime Minister of Papua New Guinea, telling him what you think of these deplorable measures, now embedded within the country’s Environment law.

Send your emails to Prime Minister Michael Somare, via his Press Secretary: betha_somare@pm.gov.pg

Also, please include a copy of your letter to info@actnowpng.org

I implore you to RESTORE the Environment Act and REVOKE these newly-legislated measures that deprive all Landowners in Papua New Guinea of their most basic rights: Their right to land, their right to live in a clean and safe environment, their right to justice.

If the tables were turned, Prime Minister, I believe you would be standing beside the People, struggling with your People and their rights in what is supposed to be a DEMOCRATIC society.

Draconian measures like these are UNACCEPTABLE in todays world; a world that is being drown by climate change, and where the Rights of Mother Earth and all Human Beings have taken precedence over short term economic gains and ideas of “National Interest.”

If we do not preserve our Environment and Protect our Human rights than there is no Nation.

Prime Minister Somare, if you take pride in your Nation, RESTORE THE ENVIRONMENTAL ACT!!!