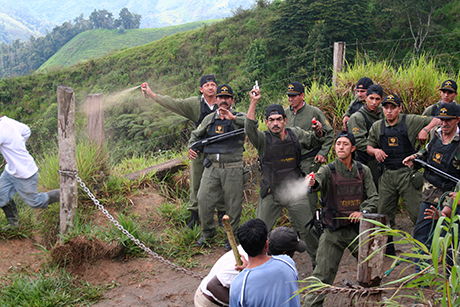 An important, and hopefully precedent-setting lawsuit has been filed in Canada, which aims to hold Copper Mesa Mining Corporation and the Toronto Stock Exchange accountable for human right abuses connected to an open-pit copper mine in the valley of Intag, Ecuador.

“Financing being raised in Canada is traveling across borders to do harm,” says Murray Klippenstein, who’s representing three villagers in the lawsuit. “We want to find out if our legal system can respond to this.”

“They allege that company directors and the TMX Group have not done enough to reduce the risk of harm being faced by farmers and community leaders,” explains The Tyee.

It is a straightforward lawsuit, like dozens of others filed against Canadian mining companies around the world. However, this one also steps into some uncharted legal territory…

“What is happening in Intag is illustrative of a wider problem,” notes a summary of the lawsuit: “the corporate and financial unaccountability of the Canadian mining industry.”

Indigenous People in Tanzania, America, Honduras, Mexico, Thailand, the Philippines know all too well what this means, along with dozens of indigenous communities within Canada.

To all of them, “Human rights abuse” and “unrestrained environmental destruction” are synonymous with the industry.

The situation can only get worse, unless the Canadian government starts to hold these companies accountable.

This lawsuit may go a long way to achieving this, though it will probably be years before we see the end of it.

For background and more information, you can read “Canadian Mining Firm Financed Violence in Ecuador: Lawsuit.” You may also want to see the documentary Under Rich Earth by Malcolm Rogge. Photo by Elizabeth Weydt.