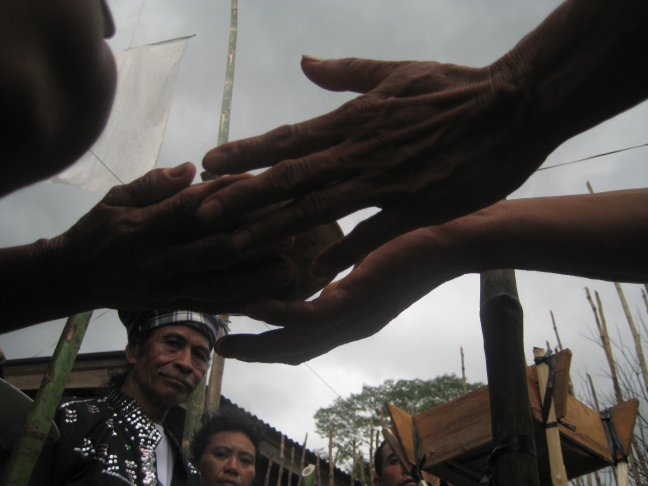 The Canadian mining company TVI Pacific, who operates a gold mine in the Southern Philippines, has been found guilty of numerous crimes by the traditional justice authority of the Subanon People – the “Gukom.”

Since 1994, the company has occupied Mount Canatuan, a sacred site for the Subanon People. They have done so without the Subanon’s consent (FPIC). Throughout the occupation, TVI has committed numerous human rights abuses and violations of Subanon customary law, as you’ll see reflected in the Gukom’s verdict.

First a bit on the trial…It began around seven months ago, after the Philippine legal system failed to address an assault charge layed against a member of the company’s private military force. In January 2007, Vivian Anoy Balingit, daughter of Timuay (or Chief) Jose “Boy” Anoy, was threatened and then struck with a weapon after refusing to acknowledge TVI’s ‘right’ to her People’s land.

It “was the latest in a long line of alleged human rights abuses perpetrated by the company’s security forces,” notes Indigenous Peoples Links (piplinks) in a recent report.

With nowhere else to turn, Timuay Anoy and his people approached the Gukom. 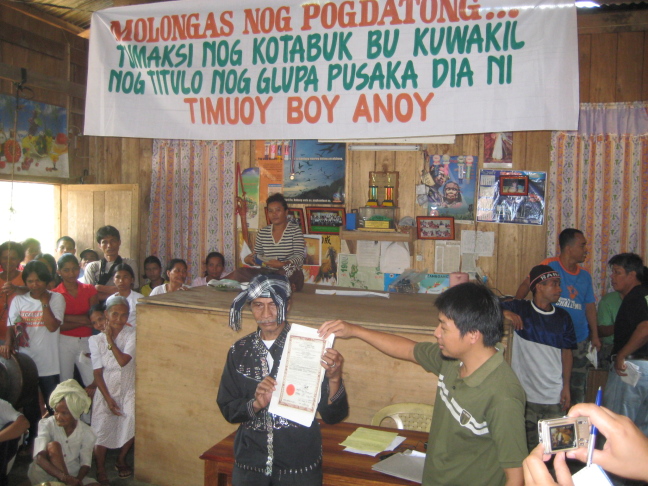 After a mid-December hearing and then months of deliberation, the Gukom delivered their verdict on May 26th.

Preceeding it, the Subanon held a Thanksgiving Ceremony for Timuay Anoy, who had his land title returned to him earlier the same day (see photo to the right.) Anoy’s been struggling to regain this since it was literally taken from him in 2003.

As for the verdict, piplinks says

[the Gookum found that] TVI is guilty of a number of crimes against the recognized traditional leader of the Subanon in that area, Timuay (or Chieftain) Jose “Boy” Anoy, his people and the lands within his Ancestral Domain. These include violence against certain individuals, violation of the Subanon’s customary laws, abuse of the dignity of Subanon leaders and damage to personal property and the local environment. Many of these are grave violations of Subanon law. Various penalties were stipulated, including financial restitution through the payment of a specified number of ‘bolos’ [lengths of cloth which can be equated to standard currency] and a call for restitution in order to restore natural balance (and most importantly in this case, that TVI leave the Ancestral Domain of Timuay Anoy).

It’s unclear whether or not the government of the Philippines or TVI Pacific recognizes the Gukom (or their judgement), however, it may not matter. As Piplinks further explains,

[This action] “is an assertion of the rights of the Subanon to their self-determination and self-governance, which should clearly be recognized under the 1997 Indigenous Peoples Rights Act (IPRA). It is not only a test of the Philippine legal system to recognize customary laws and practices of the indigenous peoples of their traditional justice system, but it is also a ground-breaking challenge to a multinational company.”

That it is! And with dozens upon dozens of multinational companies currently occupying indigenous lands across the world, it is a most welcomed one.