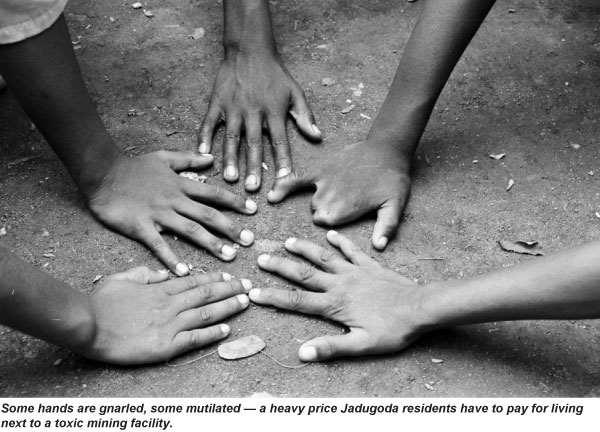 Whether we’re talking about a proposed uranium mine in Nunavut or the Mirarr People’s right to keep a massive uranium deposit in the ground, the debate on Uranium mining is raging. And for good reason, too. Unlike the risks that come with extracting most other minerals, the risks of uranium mining are guaranteed, along with the dangers that come with any use of uranium. However, there is one uranium struggle that has been totally left out of the debate. The struggle in Jadugoda, Jharkhand, India.

You would be would hard-pressed to find good background about Jadugoda, a place that some have to referred to as “India’s Navajo Nation”. Anti-nuclear activists, environmental NGOs, well-paid journalists… nobody ever talks about Jadugoda.

Nobody talks about, for example, how kids play, drink and bathe in water that contains radioactive waste; or how villagers suffer from all the major health problems that are usually nothing more than talking points in our debate: cancer, physical deformities, blindness, brain damage, sterility, death. But these aren’t talking points for the people of Jadugoda. They’re an everyday part of life.

In the message below, the Jharkhandi Organization Against Radiation (JOAR), which has been leading the fight against uranium mining in Jharkhand, reminds us that Jadugoda exists – and that the Uranium Corporation of India Limited (UCIL), which has been operating in Jadugoda since the 60s, is trying to extend the life of the old uranium mine in the area.

Given the reality of Jadugoda and the long history silence that surrounds it, the time has come for the international community to stand with the people Jadugoda for justice, for health and for unborn generations.

Public hearing on 26 May 2011 for new Uranium Mine

You may be aware of the public hearing of Uranium Corporation of India Limited (UCIL) in Bhatin, 2 kilometers away from Jadugoda on 26th May 2011 for extending the life of an old uranium mine in the area.

We appeal to people around India, concerned about the deadly damage caused by radiation and nuclear materials, to come to Jadugoda to help local communities counter the farcical public hearing and expose the callous disregard for safety and lives of local people by UCIL.

The experience of the past public hearings indicates that they have been sheer mockery of law. With the help of police and paramilitary forces, the local administration and Jharkhand state pollution control board seem to become a party to the entire process, though they are supposed to act neutrally.

This time too the UCIL’s public hearing is turning out to be a complete eyewash. Rajani Soren and Anup Kumar Agrawal of the Human Rights Law Network, Ranchi, who visited the affected area on 15 May found that so far the local panchayat has not been given either a notice about the public hearing or the Environment Impact Assessment (EIA) report, as required by law.

There is also a fear that, like on previous occasions, the UCIL using local administration will not allow experts from outside or for that matter large numbers of dissenting locals to participate in the public hearing.

Now we are receiving strange but expected news— that UCIL plans to conduct a signature campaign among the non-tribal business community in the four days prior to the public hearing, which is a clear violation of the law. This community thrives on trade carried out in the Jadugoda Market, which in turn flourishes as a result of UCIL.

For a long time now, UCIL has also been continuously spreading false information against the Jharkhandi Organisation Against Radiation (JOAR).

After the Banduhurang Public hearing, in Feb. 2004, the company said “we would expose its reality within a year… we have asked the government to look into the funding of these organizations”.

In yet another news paper (May 22, ‘09, Hindustan) the company has gone on record saying, “ some forces who do not want the country becomes strong and prosperous, these traitor organizations are earning millions of rupees for this”.

Prabhat Khabar on the same date goes on to say, “local administration is on an alert and ready with extra armed police forces…”

Despite our efforts to bring the core issues including radiation –its impact on health / environment / life and culture of the indigenous people into the debate, UCIL has so far successfully diverted them completely to suit their interest. They made it as an issue of law and order or alleged conspiracy of anti national forces.

Now after so many years of our struggle we have many books, posters and reports of three health and radiation studies but UCIL has turned a blind eye and a deaf ear to these findings!

Prior to the public hearings, the villagers are all along being kept in the dark. Most of them are not even aware of the date of hearing, no documents related to the project are made available to them.

Interestingly, the villagers are not even aware of the basic concept or significance of public hearing. They feel it is more of an opportunity to settle their immediate issues like jobs, rates for their land, land disputes, road, electricity etc. As a result, the issues pertaining to complex environmental impact from the project, its assessment and its management never emerge as the main issues of the debate and the company thus gets away very favorably. The issues that are meant to be addressed on such occasions get bypassed.

This was also the case in the previous hearing. A quorum was shown on paper, following which UCIL asked their expert to read out the summary (15 pages) of the report. Henceforth, announcements were made— “now that you have heard about the project what do you have to say…”?

At the same time, some people slowly slip into the villages, coaxing the villagers to simply put their signature on some paper, as if taking attendance for the hearing… And then finally they will be asked to raise their hand as supporting the final decision …

But majority of the locals present there were poor and illiterate, who had never experienced this kind of situation before. So they simply happened to be mute spectators to the drama. However, in sharp contrast, the very purpose of public hearing, is to give an opportunity to the local populace to vent their views and grievances freely on the proposed project.

At these so called public hearings UCIL is always seen to bring its own employees by buses, who are made to occupy the seats in the tent or place of occurrence of the meeting. But the actual project affected people sit outside the tent as complete aliens to the entire drama.

The public hearing, on 24th Feb 2004, for Banduhurag project, for example was conducted with heavy police presence even though the ground situation was slightly favorable for UCIL. A number of those who lost land from the earlier Turamdih mine project, (that had been closed down around 1985 due to very poor ore grade) had reasons to feel hopeful. They had been both landless and jobless for all these years. One such villager even said- “we will die of Alpha, Gamma radiations later, but we are dying of hunger each day …” UCIL clearly exploited the situation in its favour by playing upon the economic insecurities of these people.

The second public hearing took place in Baghjanta, (Sept. 2004) which is 30 Kms East of Jadugoda, near the Tata – Musabani Road. The site of the hearing was 12 Kms off the Main Road, in the remote forested interiors.

This area is notorious as a battlefield between the armed ultra left and Government supported counter armed groups. It is here that the JMM MP from Jamshedhpur, Sunil Mahato was killed in broad daylight.

On the day of the hearing, suspicious groups were found placed at regular intervals along the 12 kms stretch leading to the site. They were enquiring from the people and trying to stop them from heading towards the site. However, even though we did manage to reach the place, we were not allowed to be present in the hearing. And, of course, the hearing was so called ‘peaceful’.

The situation during the public hearing in Mahuldih (August 2005) was little different. It is 28-30 Kms west of Jadugoda but adjacent to Tatanagar. For the first time UCIL got a reply for what they had been doing in past years in the area. Officers and UCIL ran way from the place of hearing, in the face of severe protests from the locals.
(See ‘Mahuldih villagers send official back (Hindustan Times August 30, 2005)
http://www.facebook.com/l/d5ab3FcBVQr-LD_KKOLm0oDD5aw/www.telegraphindia.com/1050830/asp/jamshedpur/index.asp )

But later with the collaboration of local JMM MLA and criminal groups, UCIL conducted the so-called public hearing “peacefully” in the village of the MLA, two Kms, away from the affected village.

The announcements were made that none but the local residents would be allowed to speak. If others opened their mouth, they would have to face dire consequences– all these happened under the heavy presence of police and paramilitary forces.
(Video link- http://www.facebook.com/l/d5ab3F4Q3y3-dwNz75tqXU3H_GQ/www.youtube.com/watch?v=FxhBs86q_hY&feature=channel
or http://www.facebook.com/l/d5ab3v-cUkGY9ILJr5IZfZg1LcA/www.youtube.com/watch?v=FxhBs86q_hY )

But it is not that our struggle went in vain. Initially, after the construction of the third tailing dam, which submerged half of Chaticocha village (1996), UCIL announced that they will construct a fourth dam in the remaining land in Chaitkocha and Tilaitand . But since then they have not been in a position to expand their project in that direction.

This time too, during the public hearing of May 26, 2011 we do not expect any less drama. We will resist with whatever capacity we can but it is beyond our ability to counter the DAE/BARC scientist’s technical and scientific arguments, this struggle is just not against UCIL as the real strength behind them is the mighty Department of Atomic Energy.

Even as the Indian middle class is still busy debating pro and cons of nuclear energy or nuclear bomb, left parties too are divided. Though the labour union is dominated by the Left but UCIL is able to use them against the locals.

Nobody seems to hear the voice of the indigenous people’s concern over their culture, life, land, environment, health or even their basic human rights.

We need your support (especially intellectual) solidarity for our movement and struggle for our common future.