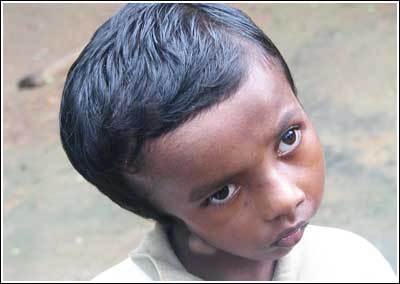 This 10-minute documentary, based on the 2007 study, Black Magic of Uranium at Jadugoda, conducted by the Indian Doctors for Peace and Development (IDPD Patna chapter), explores the harsh realities of indigenous peoples living near the Jadugoda mine, mill and tailings dam in the mineral-rich Singhbum district of Jharkhand, India.

Jadugoda is the primary source of Uranium in all of India, a discover that’s brought horrifying consequences to the Santhal, Munda and Ho tribes who live near the mining operation.

“A large number of villagers suffer from cancer, skin diseases, physical deformities, blindness, brain damage, disruption of menstrual cycle or loss of fertility,” notes jadugoda.net, a website created to inform the international community about the realities of Jadugoda. Other villagers, evicted from their lands to make way for the mine, “work as miners and are exposed to heavy doses of radiation.”

The mine is operated by the Uranium Corporation of India Limited (UCIL). UCIL firmly denies that anyone has been negatively effected by the mine. This video proves otherwise.

NOTE: UCIL is currently planning an expansion of the Jadugoda mine. Visit infochangeindia.org and sanhati.com for more information.

Jadugoda The Black Magic is the second documentary film by Jharkhand-based filmmaker, Shriprakash (kritikashri@hotmail.com). His first film, Buddha Weeps in Jadugoda, which runs for approx 60 minutes, has been screened at international film festivals around the world.