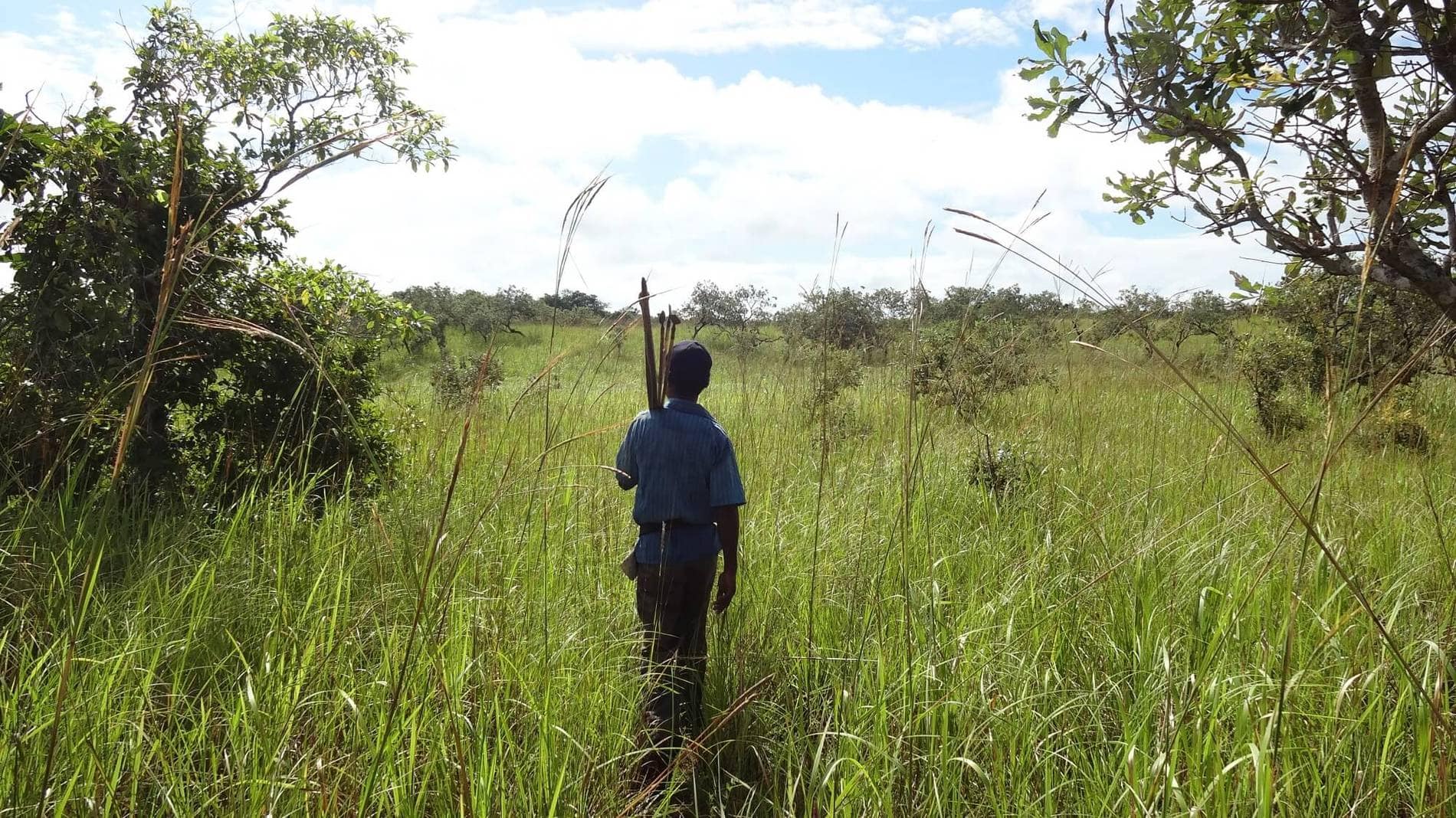 Despite their immense cultural and linguistic diversity, Indigenous Peoples developed their ways of life in much the same way. By maintaining an intimate relationship with the land for generations on end, the languages, livelihoods, customs, and cultures became inextricably linked to that same land. Some refer to this relationship as a bio-cultural heritage.

What happens when Indigenous Peoples have no legal control of their land? Their way of living faces indefinite threat, they are subjected to greater degrees of poverty, and the land itself is more likely to come under control of corporations and governments that allow resource extraction projects and other development schemes that pollute waterways, contribute to carbon emissions and cause massive deforestation (not to mention displacement of the peoples who live there). In some instances, these impacts lead to a complete ecosystem collapse.

In sharp contrast to this, studies show that Indigenous Peoples are the most effective managers and protectors of their territories which they view as a partner, a provider, and a living being. This perspective carries tangible results: in the Amazon, for example, the deforestation rate is eleven times lower in community owned forests.

Just last November, LandMark, the “global platform of Indigenous and community lands,” made a groundbreaking effort to place data about community owned and indigenous owned land into a map. In that online interactive map, LandMark is gradually revealing which areas of the Earth’s surface are held by Indigenous Peoples, whether or not the land is formally recognized by a state, or if it is in the process of being recognized. Its features also enable users to see the percentage of a country’s total land area, and what amount is held by Indigenous Peoples, as well as the strength of their legal claims to such lands.

This data stands in sharp contrast to how we typically think of land and territory. The international agenda with regards to climate change assumes that actors, priorities, and solutions are effectively negotiated and implemented by approaching the issue from the perspective of nation-states. For example, interests are defined in terms of a country’s needs: what are India’s needs, or what are obstacles to American cooperation? These needs are then augmented into macro-level concerns that reinforce the nation-state mentality: the European approach to climate change might involve one set of actions, while vulnerable members of the global south have a different set of needs. Not only does this kind of rhetoric reinforce the idea of the nation-state, but it also strengthens the very needs of the nation-state, which are almost always economic in nature. The “global south” is not just a geographic term; it carries with it connotations that this group of countries is less economically developed, making their needs at the international policy level “different” than those who are already industrialized and therefore more economically empowered to make reductions in carbon emissions. In dividing needs, interests, actors, and policy objectives along these lines, the global community leaves little room for non-state actors to effectively argue for non-economic interests, including interests in climate change mitigation and reversal. This line of thinking also assumes that Indigenous Peoples’ needs are sufficiently represented by nation states, or ignores the fact that they are not.

This system of international policy making disempowers Indigenous Peoples in a variety of political arenas, but especially in matters of climate change. International state actors discuss climate change in terms of reductions in economic development, environmental devastation, and disaster management, which are linked to financial costs. Indigenous Peoples are similarly concerned with environmental devastation and disaster management, but these issues are part of a larger problem in which their ways of life are threatened. Traditional knowledge and ways of life cannot necessarily be recovered in another geographic area, and certainly not through other strengths of the global economic market. Nor, for that matter, can they be secured through the UN’s Sustainable Development Goals (SDGs). 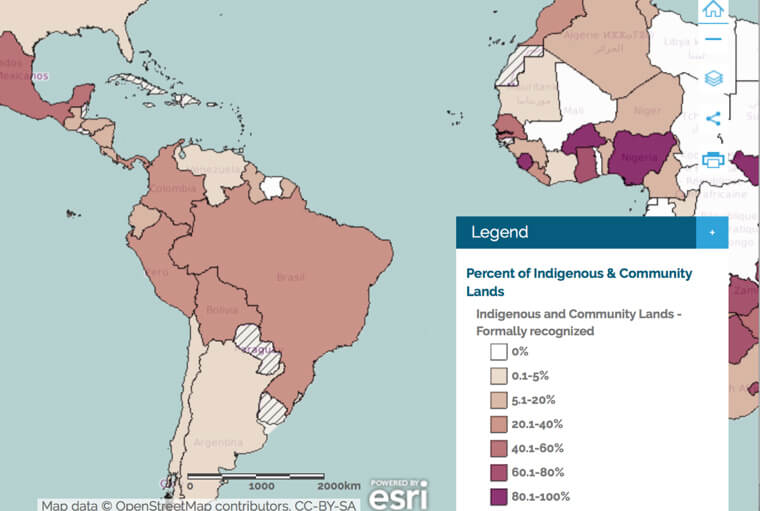 LandMark’s map allows us to understand indigenous and community land rights in the context of nation-state boundaries. In looking at a map that indicates which percentage of these lands are adequately protected, we can better understand how the interests politicians pursue at the international level do not match up geographically with the Earth’s reality. To return to the statistic first introduced in this article, 65 percent of the Earth’s land area is held by Indigenous Peoples communities and nations. Put another way, 65 percent of the Earth is arguably inadequately and unfairly represented by those with the power to decide policies that affect all of us. How can a country that protects only 5 percent of indigenous lands fairly claim to represent the needs of those people?

This matters, because Indigenous Peoples are powerful stakeholders and advocates in the fight against climate change. As studies by the World Resources Institute show, communities around the world have official or legal rights to a minimum of 513 million hectares of forests (one-eighth of the world’s total, which equates to 37.7 billion tonnes of carbon). These areas see far lower decimation of the trees and plant life that help to mitigate carbon emissions elsewhere in the world. The picture below of indigenous land boundaries in Brazil illustrates the clear difference in land that is managed and legally controlled by Indigenous Peoples versus land that is subject to economic interests and government control. 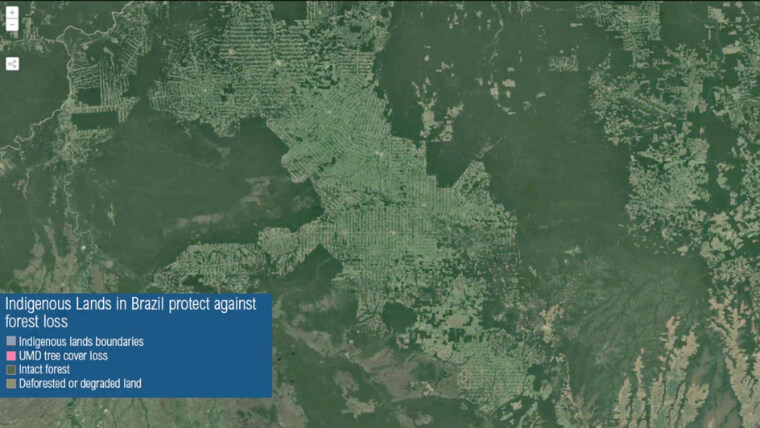 In order to effectively empower Indigenous Peoples to be advocates for the environment and allies in the struggle to combat climate change, governments need to protect their rights to the land without providing oil, gas, and mining concessions. Indigenous Peoples need to have secure community-based rights with longevity; further studies show that concession rights and individual titles lead to community fragmentation and insufficiently protect the people and lands that they manage. But these efforts are only effective at the national level; thus, the international community needs to be made aware of how powerful an impact Indigenous Peoples have on mitigating climate change. The international community also needs to understand and respond to the gap in negotiation and policy making: that is, it needs to evolve to include a space for Indigenous Peoples to advocate for their needs and contribute to solutions. This means structuring policy making in non-national terms, and pushing for non-state actors and members of civil society to become meaningful participants in the process.