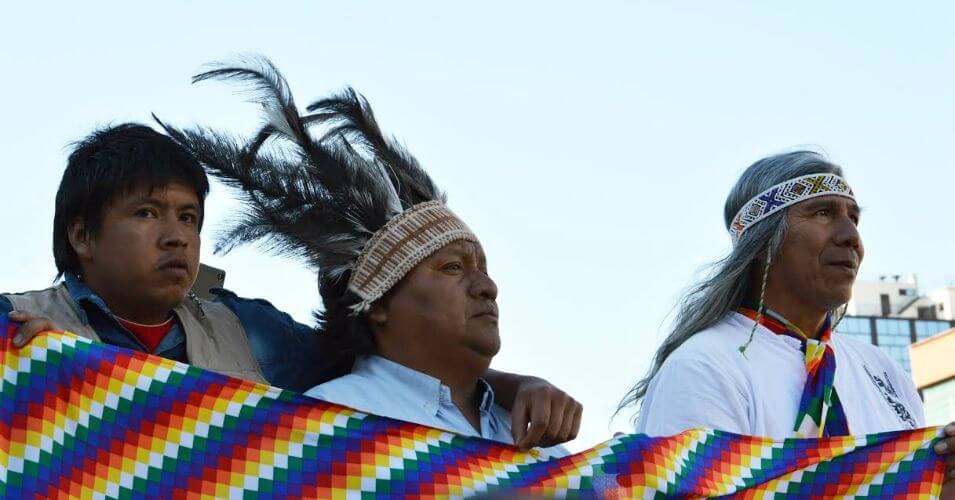 Igniting the Communal Fire: What the SDGs Could Learn from Indigenous Peoples

Felix Diaz (far right) and other leaders of the Qom and Wichi indigenous groups have maintained a protest camp on the main avenue of Argentina's capital of Buenos Aires for more than six months. The real hope for ending poverty and exploitation, writes Cregan, rests in the potential of such actions "to spark additional indignation" as a way to "help build a movement of people who recognize the true depths of the challenges" humanity now faces. (Credit: Fionuala Cregan).
Support our journalism. Become a Patron!

One week ago, world leaders gathered at the United Nations in New York to endorse, to much fanfare, celebrity endorsement and self-congratulation, the new global plan for poverty: “Transforming Our World: The 2030 Agenda for Sustainable Development.” Otherwise known as The Sustainable Development Goals (SDGs).

Meanwhile, far from the glitz and limelight, the Guarani Indigenous Peoples in Bolivia are suffering violent repression as they demonstrate against oil extraction on their land. Thousands of Shuar and Achuar Indigenous have taken to the streets of Ecuador demanding an end to large scale extractive projects in the Amazon, and a group of Qom and Wichi Indigenous begin their sixth month camped on a main avenue in Argentina’s capital Buenos Aires to demand a meeting with the government about the loss of their ancestral lands to mass soy cultivation.

Across the world, Indigenous Peoples are at the forefront of struggles to defend the Earth’s remaining habitats from the relentless advance of extractive industries, from open air mining, to oil driling to and single crop industrial agriculture.

Unfortunately, the new SDGs offer them little by way of support.

The SDGs are drenched in feel good phrases like: “peaceful and inclusive societies”; “effective and accountable institutions”; “healthy lives and well-being for all”; and “harmony with nature.” In reality, however, this self-proclaimed “transformative agenda” is little more than a fig-leaf for business-as-usual.

Once you strip away all the feel good rhetoric, it becomes clear that at the centre of the SDGs is a single idea: perpetual economic growth. In the real world, this means ever-increasing levels of extraction, production and consumption, including a 7 percent annual GDP growth for the world’s least-developed countries (LDCs). This, according to the UN and their big NGO and big business collaborators, is the key to solving poverty and inequality.

Alberto Aguirre, a Qom Indigenous activist from Argentina, sees the effects of this obsession with endless growth. “In the last 30 years we have seen an unprecedented pillaging of the Earth’s natural resources. This has brought with it hunger and environmental devastation,” he says. “Market economies have caused pollution, hunger and death. In the past, communities lived in harmony with Nature, the rivers were not contaminated, people did not go hungry and species were intact.”

And he should know. Until relatively recently, hunger and poverty as we understand them did not exist in Indigenous communities. We now live in a world where Indigenous Peoples make up only 4.4 percent of the global population, they account for about 10 percent of the world’s poor. The same pattern is evident across continents: evicted from their ancestral lands to make way for industrial development and the “miracle” of economic growth, Indigenous communities suffer some of the highest levels of hunger, illiteracy and preventable diseases.

“It pains us today to see our children go hungry, rivers with so few fish and acres of forest, which provide so much, ravaged in minutes by bulldozers,” says Antonia Zeron, a Guarani Indigenous leader from Boliva. “When my grandmother was a child, she did not go hungry, the land belonged to everyone.”

The SDGs do acknowledge the breadth and depth of the challenge:

“Billions of our citizens continue to live in poverty and are denied a life of dignity. There are rising inequalities within and among countries… Natural resource depletion and adverse impacts of environmental degradation, including desertification, drought, land degradation, freshwater scarcity and loss of biodiversity, add to and exacerbate the list of challenges which humanity faces. Climate change is one of the greatest challenges of our time and its adverse impacts undermine the ability of all countries to achieve sustainable development.”

The problem is that they then actively sidestep any mention of the root cause of these “challenges.”

The SDGs only response to our polycrisis is for more of the same: more economic growth, everywhere; more industrial production and consumption; and more of the same basic thinking that has brought us to this point.

In their desire to satisfy the demands of a global elite whose only concept of progress is ever more profit, the SDGs have ignored the voices of those who have the clearest insight into type of change needed. “What we need is spiritual and philosophical change,” says Aguirre, “a return to living in harmony and listening carefully to the knowledge of Mother Earth.”

Indigenous Peoples’ wisdom – still deeply rooted in their cultures despite over 500 years of colonisation and genocide – should be a source of inspiration and guidance that brings our focus to deep structural and spiritual dimensions of change.

“The Earth gives us life – that is why for Indigenous People she is Mother Earth.  Human beings are not the owners of the Earth – they are another element of it closely interconnected to all other living things from plants and animal to water and air, and we must live in synchronicity with them,” explains Aguirre. “When hunting or gathering we only ever take as much as we need, never more, and we rotate hunting territories to allow the land replenish itself and ensure the delicate balance of the eco-system is maintained. It is no coincidence that 80 per cent of the Earth’s remaining biodiversity can be found on Indigenous territories.”

“Living in harmony also means a society where resources and responsibilities are shared, where no one individual is disproportionately powerful or wealthy. People are valued for their contribution to the community and not for individual personal wealth and power from a rigged game. Resources are shared so that families, communities and the natural environment thrive and survive not just in the present but for generations to come,” adds Seron.

Felix Diaz, one of the leaders of the Indigenous protest camp in Buenos Aires likens this to a fire. “I like to think of a communal fire as a symbol of our humanity,” said Diaz. “One person adds wood, another adds paper and each contribution brings light and warmth to the whole group.”

The SDGs do not represent the flames of change. In fact, they are more of a smoke signal, a mere distraction. The hope now rests in their potential to spark indignation, to help build a movement of people who recognize the true depths of the challenges we face. This emerging movement is increasingly standing with and learning from Indigenous Peoples all over the world in their struggle to protect what we have left, and return to a way of life that is more balanced and in harmony with the living force of the whole planet.

This article was originally published at Common Dreams. Republished at IC under a Creative Commons Attribution-Share Alike 3.0 License.