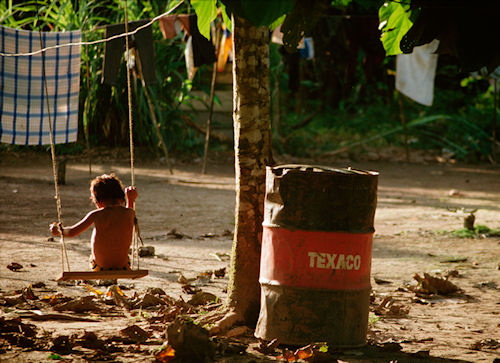 Hoping to portray itself as an innocent victim, the massive oil company Chevron has produced a misleading video report that claims Texaco, now owned by Chevron, is “completely blameless in the dumping of billions of gallons of toxic waste into the Amazon jungle.”

The company is currently facing civil liability of up to $27 billion for
dumping more than 18 billion gallons of toxic wastewater in the Ecuadorian Amazon from 1964 to 1990. Ignoring safe environment practices, the company further spilled about 17 million gallons of crude oil, and left behind “hundreds of open pits” filled with hazardous waste.

“The result was, and continues to be, one of the worst environmental disasters on the planet. Contamination of soil, groundwater, and surface streams has caused local indigenous and campesino people to suffer a wave of mouth, stomach and uterine cancer, birth defects, and spontaneous miscarriages. Chevron has never cleaned up the mess it inherited, and its oil wastes continue to poison the rainforest ecosystem,” explains chevrontoxico.com.

Chevron bought online advertising on Google to promote its report, currently available on youtube, which aired last night ahead of a segment on 60 Minutes about the company’s “Amazon Chernobyl“.

“Chevron is using false information in this deceptive video to mislead the public, its own shareholders, and Chevron employees about its responsibility for an environmental disaster of epic proportions,” says Mitch Anderson, Executive Director of Amazon Watch.

The report misleads viewers on several important facts about the lawsuit, as made evident by the 4,000-page report that was put together last year by a team of 14 independent scientists and on court-appointed expert. As noted in a press release by the Amazon Defense Coalition, some of those misleading facts include:

A final ruling on the case is expected some time this year.

For more information and background about Chevron’s oil contamination in Ecuador, visit: chevrontoxico.com. You may also want to have a look at the films: Justicia Now!, Ecuador’s Black Plague, and CRUDE