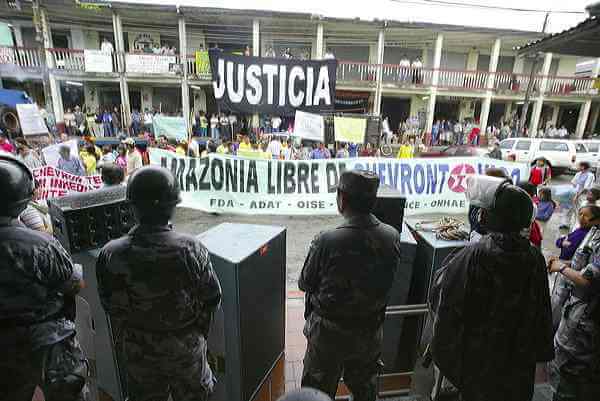 From 1964 to 1992 Texaco (now Chevron) built and operated oil exploration and production facilities in the northern region of the Ecuadorian Amazon, known as the “Oriente”.

When the oil company arrived in the region, an area of more than 400,000 hectares was pristine rainforest inhabited by indigenous communities living in the ancestral style, in harmony with their natural habitat. Nearly three decades later, when Texaco pulled out, a vast area had been environmentally devastated.

Today, dozens of communities continue to suffer severe health effects, including surging rates of cancer. Meanwhile, indigenous communities have been dispossessed of their traditional homelands and more than a million hectares of ancient and irreplaceable rainforests adjacent to the company’s pipelines and production facilities have been leveled.

The company left a region three times the size of Manhattan polluted with more than 600 open toxic waste pits. To this day, the outdated and unlined dumps continue to leak into the water table, polluting rivers and streams used by more than 30,000 people for drinking water, cooking, bathing and fishing. (from chevrontoxico.com)