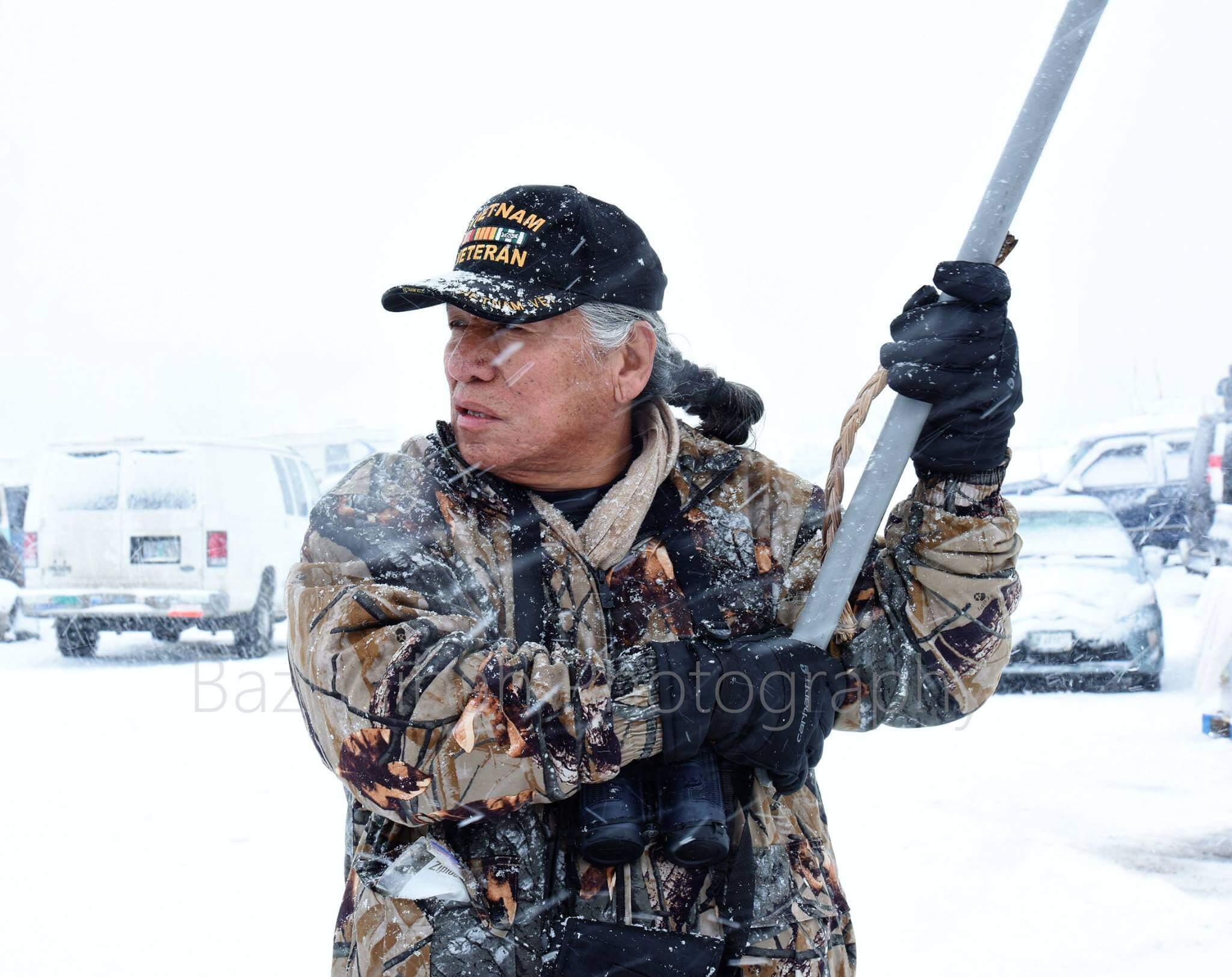 “We are also ISIS — an ISIS of life. ISIS is Indigenous Standing in Solidarity… one day it just came to me in my dream. We are ISIS. Life givers. We protect the water. Water is the most important thing that sustains life on this planet… And that’s what drove me here.”

Anthony Aspaas is a Navajo elder and healer from Shiprock, N.M. As a young Native growing up in the boarding school system and then as a Vietnam veteran, he has borne the scars of PTSD for most of his life. His journey to Standing Rock was one of solidarity – but even more, it was one of healing.

I was among those in the Hogan at Southwest Camp, Oceti Sakowin, when Anthony shared a vision with the prayer circle around the woodstove, the ritual that began each day. Anthony was the elder who opened the prayer, as he did most days when I was there. Tensions were high at the time, as a group of veterans were keen to launch a major civil disobedience action while their numbers were high at the camp – an estimated 4,000 responded to the call in early December – but the Elder’s Council had asked them to stand down, due to subzero temperatures, blizzard conditions and an unprepared medic team. Murmurings had been heard all around the camp on the previous day from veterans and hardcore activists who were pushing for action.

That morning, Anthony’s words seemed to speak straight into the dilemma. He had slept very lightly throughout the night, keeping the fire going, occasionally slipping into a light sleep. I had woken frequently as the storm howled around us to see a form hovering over the fire like a guardian spirit; now I knew it had been him.

“Sometimes my dreams seem so real and vivid,” he told us. “And they come true.

“Just before dawn I heard a gunshot, and I didn’t know if it was a dream or if it was real,” Anthony said.

“I have seen many dead and wounded during the Vietnam War. I know what it is like to see a body when the life has gone out of it. I don’t want to see that here.”

The circle was silent as the lesson sank in.

Thousands of veterans conducted a march to the frontlines on that day but respected the elders’ wishes, and there was no civil disobedience on that day. Anthony was among them. IC caught up with him afterwards.

IC: Tell me a little about yourself and how you got to be here.

Anthony: My name is Anthony Aspaas. I am a registered nurse and a Vietnam veteran from the Navajo nation. What brought me here is I, having experienced PTSD as a Vietnam veteran, I came here to find myself. And, you know, look for that empowerment. Look for that healing, look for that spiritual healing. Also the stuff that has happened, the brutality, what really pushed me to come here is when they took one of our women. Arrested her, strip searched her, and put her in a dog kennel. And marked her, just like the Germans did to the Jews. And that was just, horrific. And it just caused a lot of anger in me but part of having PTSD is having anger.

Since I was a little boy I have seen my mother and father experience discrimination before my eyes and growing up in the boarding school system I experienced more discrimination and racial bias. I’m very familiar and have strong feelings towards discrimination against the oppressed. In the military and in college I encountered still more discrimination. After 25 plus years with the Indian Health Service I was fired from my job as a very seasoned nurse due to PTSD. I love my job very much and I love taking care of people; I did that job since Vietnam in the ’70s. Unfortunate my PTSD again was retriggered, causing me to start over again with intense treatment. I am also very strong in my cultural beliefs, which involves offering to Mother Earth songs, prayers and offerings. My day starts with a prayer and ends with a prayer every day. Through my prayers I experience many visions of the future, good and bad.

Depression, suicidal ideation, homicidal ideations. I just wanted to find a cure for myself, find my place again. To be whole again, to be human again, to be compassionate again. You know, to have that love in my heart. That’s what brought me here. And I found it — because this camp is filled with so much compassion, with so much love, so much togetherness, so much unity. It’s just overpowering and I feel, you know, just — we’re family.

We’re family. It does not matter what color you are, what belief you have in you, we are family. A strong, beautiful family.

We are also ISIS – an ISIS of life. ISIS is Indigenous Standing in Solidarity… one day it just came to me in my dream. We are ISIS. Life givers. We protect the water. Water is the most important thing that sustains life on this planet… And that’s what drove me here..

As far as the oil company, that’s another issue. It’s just elite, the most powerful, the most rich. They have their own elite club across all nations. Whether it would be Russia, the Middle East, China, even in Mexico. They have their own elite and they make these deals, they make these trades, and they think less of the hardworking people. This is what they are, and it’s time that the working people stand up for their rights of unborn children, children or their family, or their brother, or their sister, and for the planet.

We have done so much in destroying this planet. You know, how I look at it, one day Mother Earth is going to cleanse herself. Meaning that she will destroy everything on this Earth. Cleanse herself. Imagine that, all life being destroyed — if we don’t take care of her. Just something that’s so powerful, something that has to be done.

Your money, your wealth. It can’t buy life. It can’t buy, you know, that cure that they’re looking for. They’ve got so much, their mind is so caught up in their wealth they cannot, they cannot release it. You find love in the heart being simple people. They live their life by money and they can’t let it go. It’s so hard for them. It’s tragic.

And on a separate note, you know I just love this camp here. That they put it up overnight, you know. There’s a whole new generation coming. Across the world, they’ve touched me. And the flags I see out there, I’ve seen people from China protesting. I’ve seen people from the Middle East, Palestinians. I can’t believe it! We have a common cause. It’s a beautiful, beautiful thing. And it took the Sioux Nation to finally stand up against this government and this corporation. It took the Sioux Nation, and they said “no more.”

And for many years I’ve been telling people, “One day all the tribes are going to come together and when that day comes, the Government will be afraid of the Indigenous people.”

And Indigenous people is everybody, the common people, you know, the white, the black, the red, the yellow, whatever color you might call them. They’re still human beings. You know, and that’s, that’s where we are right now. We’re all one family. One family, it’s just like the rainbow. You put all the colors of the rainbow together, it shines white light. And that white light is what’s in our heart. That’s our soul, our inner being, That’s the little light that makes the heart beat every second. That light is us. As a pure nation, that’s who we are.

I will never forget this day. We attended a powwow out there, at the casino. Where they had a spiritual leader there. And at the beginning they asked all the medicine men to come down and this is the first time I’ve acknowledged that. I’m going to represent my people. You know, I’m going to go stand with them. And, my brother over here, you know, he’s also very blessed. In his own traditional way.

We have a common bond but when we stood in that circle they sang one of the oldest, traditional, spiritual songs that is only sung for special things. Special moments, and this was a special moment. I was just honored by the Lakota, they sang that traditional song. So beautiful. I didn’t understand the words but the visions that I saw just brought tears, tears just rolled down my face. I tried to stand at attention and hold my emotions back but tears just came down. I cried because I could feel the holy people. I could feel the Spirit, the Eagle Spirit. I could feel the drumbeat, I could just feel the Earth. It was so powerful, so moving. I will never, never forget this day. You know, and I hold the Sioux people in high honor for giving me the opportunity to stand at their circle and hear their precious, most beautiful song ever. Which is only sung for special events. Thank you.

Meet other Water Protectors in this series: #VoicesfromStandingRock