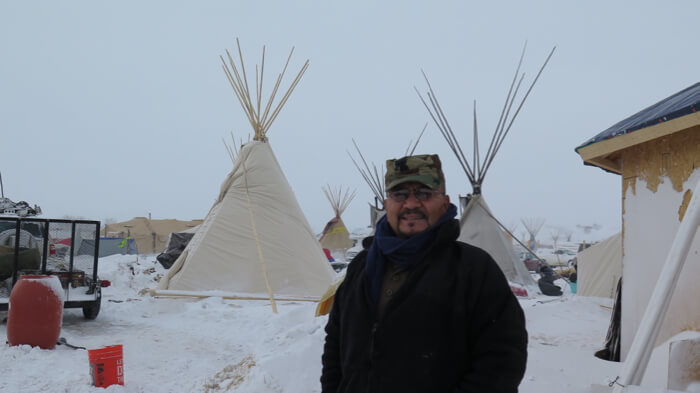 “I was calm and peaceful. I felt exactly as though I was marching with spirits of those same Native warriors that fought to protect and guarded this very land here.”

Julius Tulley’s job has always been to protect and serve. First, as a 22-year Army veteran. Then, as an ethnographer and archaeologist for the Navajo Highway Department, where his job has been to preserve and protect cultural and religious sites.

The Sioux burial ground in North Dakota excavated and then barricaded with concertina wire was far from his jurisdiction – and the bitter cold of Dakota winters threatened to provoke a painful reaction in his battle-scarred body. But when the Diné Veterans put out the call, he responded.

Julius: My name is Julius Tulley and I’m from Blue Gap, Arizona and from the Diné (Navajo) Nation. I’m retired Army veteran of 22 years. I remember, I was reluctant to join the military. This had to do a lot with my dad and two brothers, who also served in the Armed Forces during World War II and Vietnam Conflict. All three were affected by the traumas of war.

When I told my mom that I was wanting to join the service, she of course objected to it. She was the one that had to deal with my dad and brother’s PTSD; the nightmares, their mental and emotional conditions, and most of all, their abuse of alcohol. After finally convincing her that l would not drink, take drugs or anything that would cause harm to my body and mind, she agreed to let me join.

During “Operation Iraqi Freedom,” my unit spent 13 months in Baghdad alone. We were the second wave to go into Iraq. Accomplished were several missions that included taking over and securing Baghdad International Airport; the “Saddam Dig”; locating and destroying mounds and mounds of cached artillery rounds and other explosives; clearing routes of mines and IEDs, or Improved Explosive Devices.

IC: Okay. So, fast-forwarding to this moment. What gave you the idea to come here?

JT: It wasn’t in my plans to come here and participate. However, events here at Oceti Sakowin/Standing Rock, weren’t far from my mind. I had family members, which included my son and a couple of my brothers and many relatives that came to assist as Water Protectors and brought needed items. This was one reason that motivated me to come.

There are several of us, Diné/Navajo Warriors for Standing Rock that came here from Arizona and New Mexico. When I arrived, I really didn’t know what to expect. The only thing I was a little nervous about was the North Dakota extreme cold and blizzard conditions. However, I was ready to protect and defend our natural resources, water, land, and air.

Once I set foot on this camp, I felt a tremendous energy from all the diverse people gathered here. The power of being of one mind, one heart, and of one peaceful cause. Most of all, realizing how prayer is powerful and tangible. This all gave me comfort.

When I was in the frontline yesterday marching in the blizzard with my Native comrades, I felt very proud, strong, and at ease. I knew what my purpose and reason was. And that was to protect and defend Our Mother Earth from being raped of its natural resources.

Being in front of the “spear,” or March, was an extraordinary experience. This is something I want to remember and cherish always. It was a type of battle in itself, a different type of war. This was personal.

When I enlisted and raised my hand to a square, I was not alone. As I repeated the oath, I had in mind my immediate family, my Diné People and the land. I felt like they were literally there beside me. I sensed too that I was doing it for and on behalf of our language, culture, and our Native traditions.

The march was also a type of physical and mental healing for me. I had a hip replacement last year, which hindered and limited my activity. And I still somewhat have PTSD, which sometimes comes and goes.

IC: And what do you attribute that to?

JT: War, I guess. I also think that I was meant to be here with these ailments. Back at home, my hip gave me problems, especially when it was 35 degrees and below. It was difficult to move around. So, to say the least, I was nervous to be out in this temperature, in blizzard conditions. I’m very amazed that the cold and the march did not bother me at all. No stiffness and absolutely no pain.

Mentally, I didn’t feel as much stress as before. I was calm and peaceful. I exactly felt as though I was marching with spirits of those same Native warriors that fought to protect and guarded this very land here.

In a way, what I experienced up to this point since arriving, has been in a sense, a spiritual uplift for me. Much of this I attribute to prayer, peace, harmony, and love; in which all these exist here within the camp.

JT: With him, I asked that same thing: “So, son, what do you think? What have you experienced there?” and he said everyone is unified here, they had one mission in mind. It’s really humbling to be here. He said that this was meant to be – this didn’t just come by accident. Of all the nations coming together, not just in the US, but again, throughout the world. If something was to happen with any of the indigenous tribes here in the country, something as serious as this, we’ll be there in support. If it happens in Ecuador, Brazil, if it happens in Mongolia, there we’ll be too.

He knows we, the indigenous of this world, are all brothers and sisters. And we have to support one another in order to survive and live on.

JT: Yes, from what I heard. People from Mongolia are here. And I saw Aztecs yesterday and they were dancing in front of the line. Which was really cool to see. And again, people from the four corners of the world are here in support of Standing Rock. They do not want this oil line constructed in this native land.

IC: How do you think you’re going to take this experience forward?

JT: The experience of what I’ve learned here will be a teaching tool back at home. To learn that coming together as one, for one cause, we are powerful.

Of course, this fight to protect Our Mother Earth is going to continue, as it always has. However, I think the worst is yet to come. That’s just how our world environment is getting.

The Deities are telling us – this was meant to happen, to be gathered as one Nation. As long as evil exists on this earth, our surroundings will not get any better but worse. We will always experience different types of trials and disappointments. This is so we can grow from it and be an even stronger individual.

We can only do so much, but even helping one person, you feel better about yourself – and that’s what heals. If you’re depressed and feeling down, provide a service for someone and then you’ll be blessed. And that’s what we’re doing here.

Just yesterday, hearing one of the Elders of the Oglala Sioux Tribes here. He said December is not a good month for us. As far as Christianity goes, Christmas is the birth of Christ, which is positive – but for us Oglala Sioux, it’s not good. It’s when all the wars have happened. All the way back to the 1800s bad things seem to have happened in December, so it is not a good month to celebrate for us. With what the Army Corps of Engineers has said – it’s just a small battle that has been won.

IC: Can I ask you what you do for a living now?

JT: I am an ethnographer, slash archeologist. I work for the Navajo Nation Roads Department, Division of Transportation.

One of my main duties, of course, is to preserve, to protect cultural and religious sites.

In closing, let me say one more thing …

Why Mother Earth is so important to us is that Mother Earth is very much live, just as we are now. The rocks, the mountains, the hills, the river, the trees, things above, things beneath the earth – they’re all very much alive. There is a spirit in all of us which makes who we really are. Mother Earth and Father Sky, are created as we are. It has feelings too.

Anything and everything that lives has a destiny. There are songs and prayers that are associated with every creature, mountain, river, hill, trees, etc. This is why offerings are made. So as to keep in harmony with them. We are all related.

There is a lot of truth to, “Water is Life”; “Tó éí ííná át’é”, Our Mother Earth is made of 72 percent water; we are made of 90 percent water. We are created, developed and lived in water before we came out of our mother’s womb. Blood runs in our veins to nourish us; bodies of water, rivers and streams, all give nourishment to Our Mother Earth. Water literally sustains us. Why than would you want to poison it?

Meet other Water Protectors in this series: #VoicesfromStandingRock