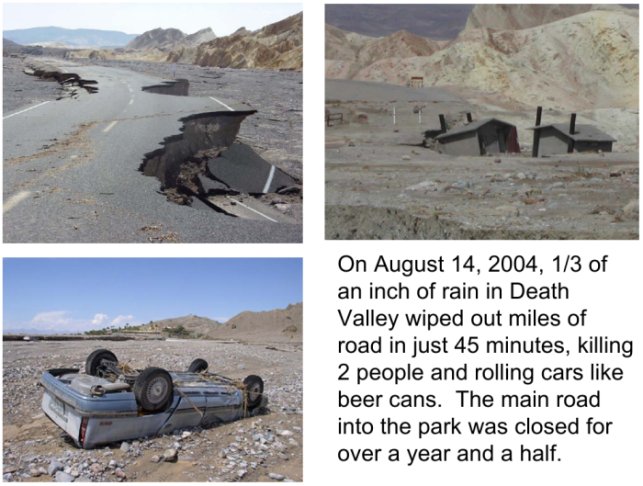 Located 80 miles northwest of Las Vegas, the Mountain range is located on Shoshone territory as defined in the 1863 Treaty of Ruby Valley. The US government however refuses to acknowledge the treaty and is currently planning to make the Mountain range into a major nuclear waste repository.

The Shoshone and numerous other Indigenous Nations, all of whom hold Yucca Mountain sacred, have been actively opposed to the plan from the beginning. There are a wide array of cultural, social, physical, and religious dangers (pdf) implicit in this project which have not been adequately addressed.

There are also a great number of serious environmental concerns, such as the fact that there are several local fault lines and nearby a volcano, making it more than likely the mountain will fracture the repository, resulting in the nearby aquifer becoming contaminated.

The region is also one of the most arid locations in the U.S, but when rain does come, it’s often in the form of flash floods which could easily cause enough damage to allow any number of radionuclides that reach the surface to escape and travel down the Amargosa River channel. Noted below, there are several other dangers and concerns.

Lately, public opposition to this project has been somewhat limited , however there is currently a comment period open until January 10, 2008—which means there’s still time to prevent the project from going ahead, even if only for a short time. If enough opposition does not come forward, then the plan will go ahead.

Send out Your Comments

If you are in the region, there are several upcoming scheduled public hearings where you can express your concerns. Otherwise, you can make a written statement by writing comments to:

Healing Ourselves & Mother Earth has a great deal more information available on their website. You may also want to read the page about Yucca Mountain on sacredland.org

There are actually 3 draft NEPA documents that DOE has issued for review and comment. One is a supplement to the 2002 Yucca Mountain final Environmental Impact Statement (EIS). The other two are combined in one document dealing with (a) the evaluation of potential rail corridors to Yucca Mountain and (b) the actual selection of a rail alignment within the proposed Caliente corridor.

It is isolated from concentrations of human population and activity. Pahrump and Las Vegas NV are among the fastest growing populations in the U.S. Amargosa Valley, at the base of the mountain is home the State’s largest dairy, providing milk all the way to Los Angeles. Amargosa Valley shares the aquifer with Yucca Mt.

It is on land controlled by the Federal Government. Some of the land is controlled by the U.S. Air Force and all of it is within the treaty lands of the Western Shoshone nation, ratified by Congress in 1863 and recently upheld by the UN Committee to End Racial Discrimination, naming the Yucca Mt. Project as part of ongoing human rights violation against the Western Shoshone.

Yucca Mountain is in one of the most arid regions in the U.S. When rain does come, it is often in flash floods that travel rapidly. Any escaping radionuclides that reach the surface can travel down the Amargosa River channel. Climate conditions also appear to be changing rapidly and a high-level nuclear waste repository must be able to isolate the waste for hundreds of thousands of years. Throughout the lifetime of the waste, the region is expected to experience future climate cycles that would include ice ages and wetter conditions.

Groundwater beneath Yucca Mountain flows into a “closed” hydrogeologic basin This” closed basin” covers thousands of square miles, and is inhabited by many communities, the Timbisha Shoshone Tribe, and Death Valley National Park, visited by nearly 1 million visitors a year, all of whom rely on groundwater for survival. The Amargosa River, which is fed by all pathways on both sides of Yucca Mt., is considered the third largest in the western U.S. and parts of it run year round above ground. Research conducted by Inyo County, CA, defines fast pathways from Yucca Mt. to area springs used for drinking water by many.

TADs also complicate waste transportation. Many reactor sites already have (or are in the process of implementing) on site dry storage facilities using multipurpose (storage/transport) container systems that are not compatible with TADs and would require either repackaging of the SNF into TADs prior to transport or the use of non-standard transport vehicles.

TADs can only be shipped via rail or by very large, oversized/heavy-haul trucks. Because rail access is NOT available at Yucca Mountain, and there is not guarantee it ever will be, the SEIS should have assessed the impacts of a TAD based transportation system that can not use rail as the primary mode of transportation to Yucca.

There are no final TAD designs in the draft SEIS, so it is difficult to assess how TADs will impact the repository system, including the transportation components.

Costs and financial arrangements for the use of TADs are unknown.

The proposed TAD system is not compatible with dry storage systems currently in use at civilian nuclear power plants.

The draft Rail EIS includes the Mina Rail Corridor as a “non-preferred alternative.” However, NEPA requires that alternative evaluated in an EIS be capable of being selected –i.e., they must be viable alternatives. Because to Walker River Paiute Tribe has refused permission for DOE to use any portion of its reservation for the proposed rail spur (and without such permission the Mina route cannot be used), it is inappropriate for DOE to have included Mina as an alternative for comparing rail corridors in the draft EIS. The mina route is not viable and should have been excluded from the EIS. The Rail DEIS No Action Alternative is also inappropriate and perhaps unlawful. If DOE does not select the Caliente or Mina rail alignment, the DEIS states that the future course “is uncertain.” In fact, if rail access to Yucca Mountain is not implemented, the NO Action alternative would be legal-weight truck shipments.

The repository SEIS should have evaluated the impacts of a legal-weight truck transport system nationwide and within Nevada. DSEIS Does Not Adequately Address Transportation Safety and Security. It does not consider worst case accidents – such combinations of factors “are not reasonably foreseeable”.