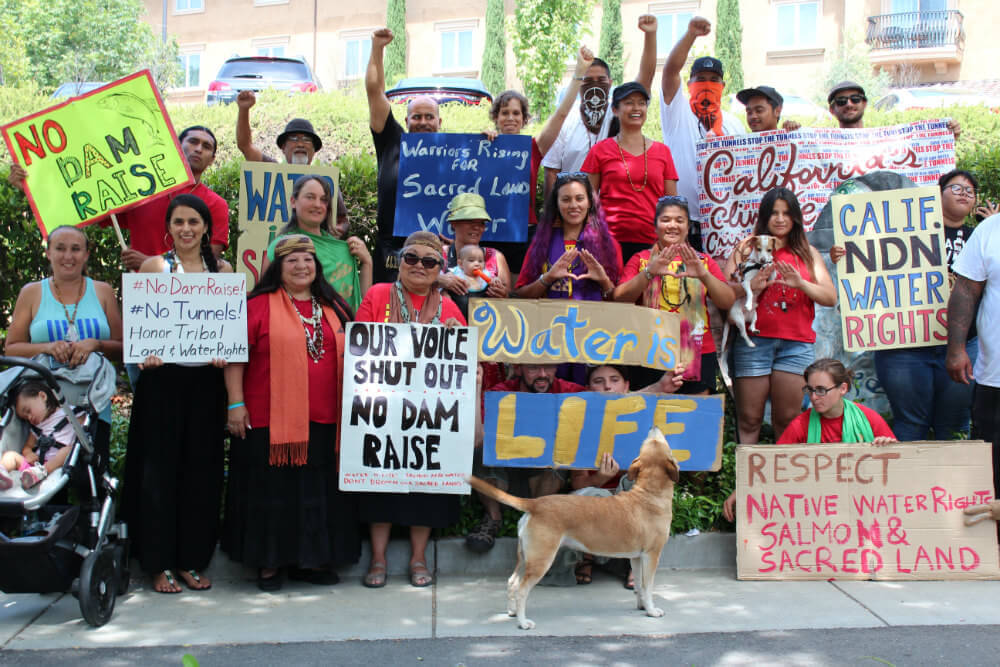 Photo of protest against the California Water Summit in front of the Westin Hotel in Sacramento on June 29 by Dan Bacher.
Support our journalism. Become a Patron!

The Winnemem Wintu Tribe, other tribal representatives and their allies rallied, chanted, sang and waved signs on the sidewalk in front of Westin Hotel on June 29 and 30 outside the Second California Water Summit in Sacramento.

They were there to protest Governor Jerry Brown’s efforts to exclude California Tribes, environmentalists, fishermen and other key stakeholders in this public meeting about massive state water infrastructure projects proposed under Proposition 1, the $7.5 billion water bond.

Members of the Concow Maidu, Miwok, Hoopa Valley, Pomo, Wailaki and other tribes and Native Hawaiian groups joined with local activists as they shouted, “Water is sacred, water is life, protect the salmon, protect water rights.” 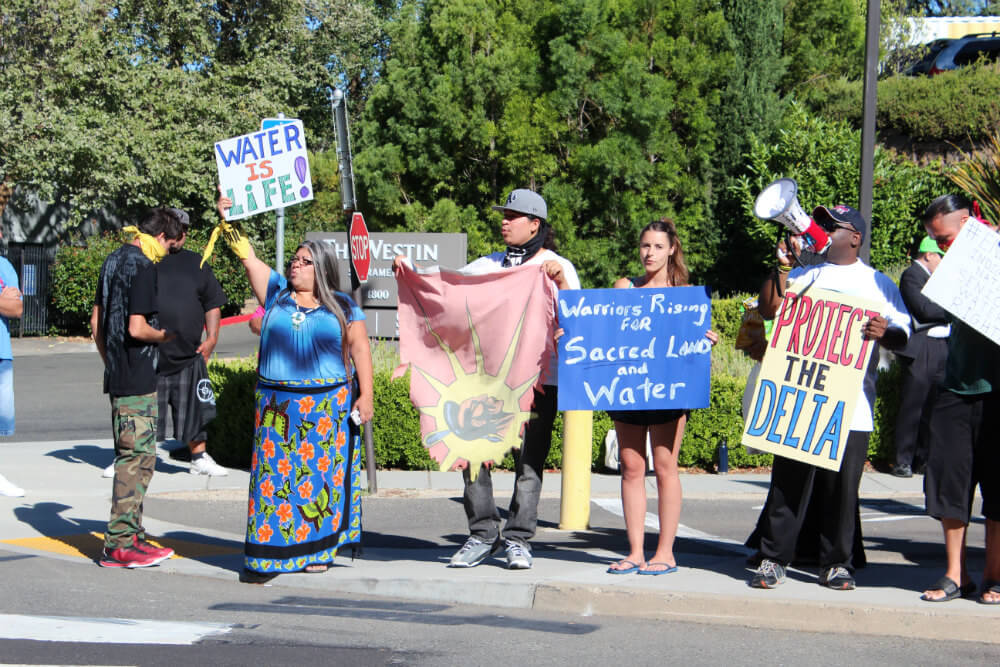 Protesters gather in front of the Westin Hotel to protest Governor Brown’s Water Summit for the Rich. Photo by Dan Bacher.

Representatives of the Klamath Riverkeeper, Restore the Delta, United Native Americans and Occupy Sacramento also participated in the event. Around 40 people were there at the protest at any given time; over 100 people showed up at the event between the two days.

Protesters also chanted, “Fight, Fight, Water Rights!” and “Corporate Graft, Corporate Greed, this is something we don’t need!,” as cars drove by on Riverside Boulevard in front of the hotel. 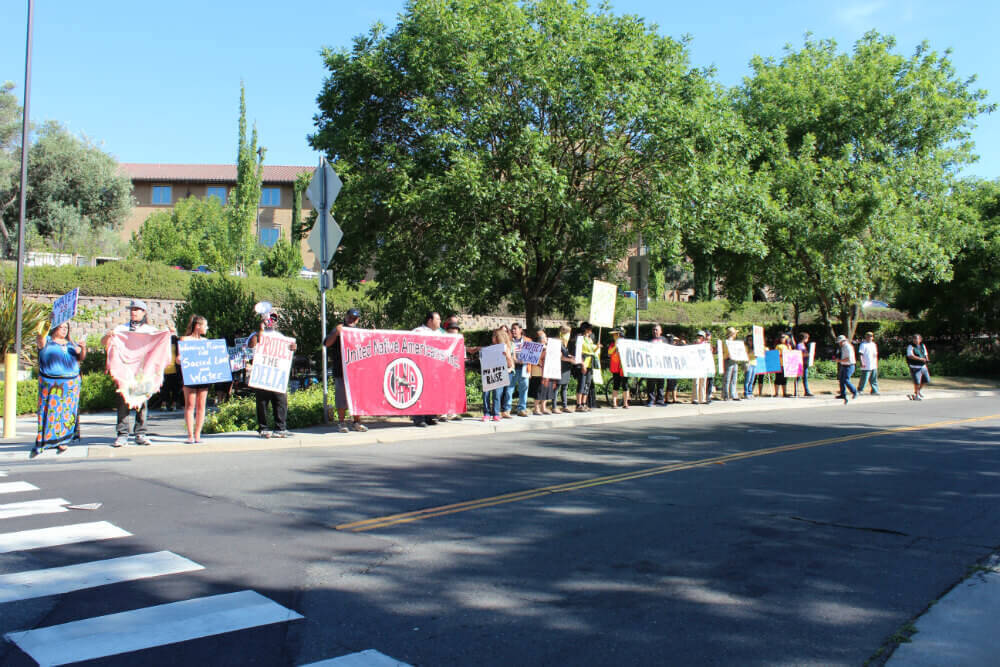 Protesters line the street in front of the Westin Hotel in Sacramento to blast Governor Brown’s exclusion of Tribes and their allies from the summit. Photo by Dan Bacher.

The Brown administration advertised the event as a conference to discuss the latest developments including project selection for the $7.5 billion water bond money that is now available after the passage of the Water Quality, Supply and Infrastructure Act of 2014, Brown’s controversial Proposition 1.

The website for the event proclaimed, “With 7.5 billion bond funds available, come and learn about funding and financing opportunities for water infrastructure projects at the must attend event for California water.” 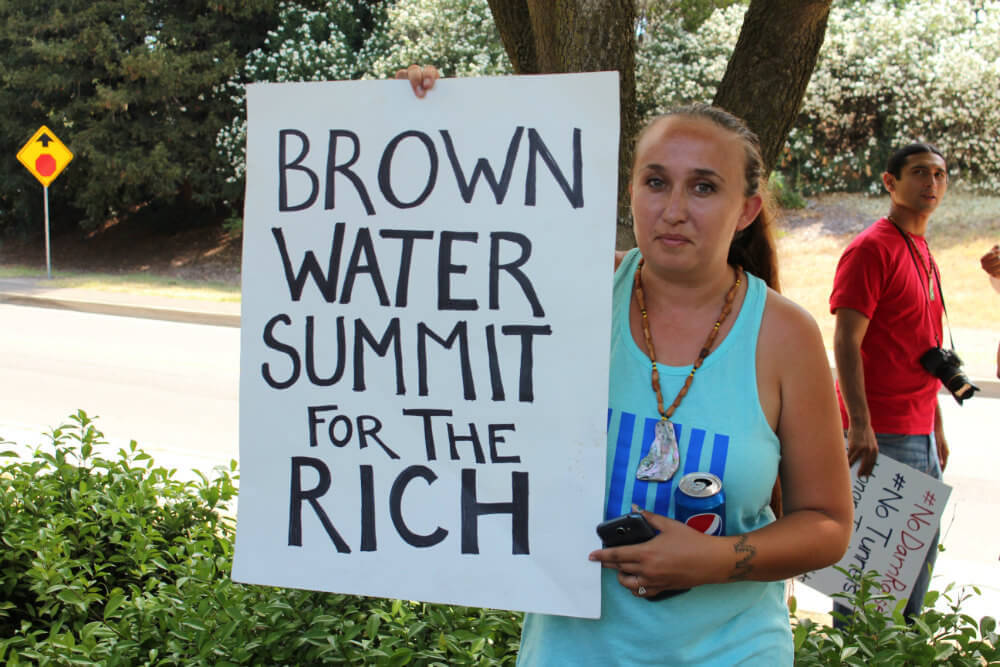 The keynote speaker was Debbie Davis-Franco, the Local Government Drought Liason for the Governor’s Office of Planning and Research (OPR). She was originally scheduled to speak on Monday, but then was rescheduled to speak on Tuesday, apparently due to the protest outside the hotel on Monday.

Caleen Sisk, Chief and Spiritual Leader of the Winnemem Wintu Tribe, emphasized that registration for the three-day summit was nearly an astounding $1,500 per person – and that been no efforts to “include tribal representatives, environmentalists or anyone who is advocating for sound water policy that will benefit future generations, local ecosystems and salmon and other fisheries.” 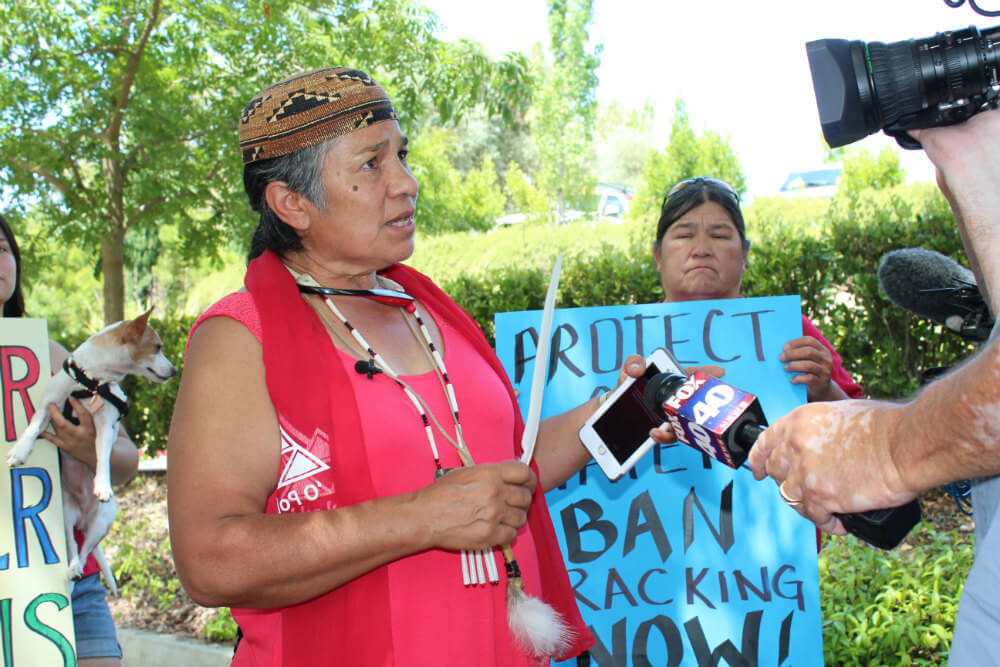 “Most of the California Indians who are working on tribal water rights and for healthier rivers can’t afford a $1,500 registration fee,” said Chief Sisk. “This is clearly an effort by Governor Brown to exclude the tribal voice, shove out anyone who disagrees with his destructive water plans and provide an opportunity for government and the big water power brokers to collude behind closed doors.”

A review of the agenda and website reveals that the conference was designed for water districts’ staff, government scientists, corporate representatives and other advocates to advance Governor Brown’s pet water projects like the Shasta Dam raise and the twin Delta Tunnels. Both of these would be devastating for salmon and tribal cultural resources and sacred sites, including many of the Tribe’s sacred sites on the McCloud River that weren’t inundated by Shasta Dam, according to Sisk.

Gerald Thomas, an Elem Pomo member who was holding a sign proclaiming, “Warrior Up For Water,” outside the Hotel, agreed with Sisk. 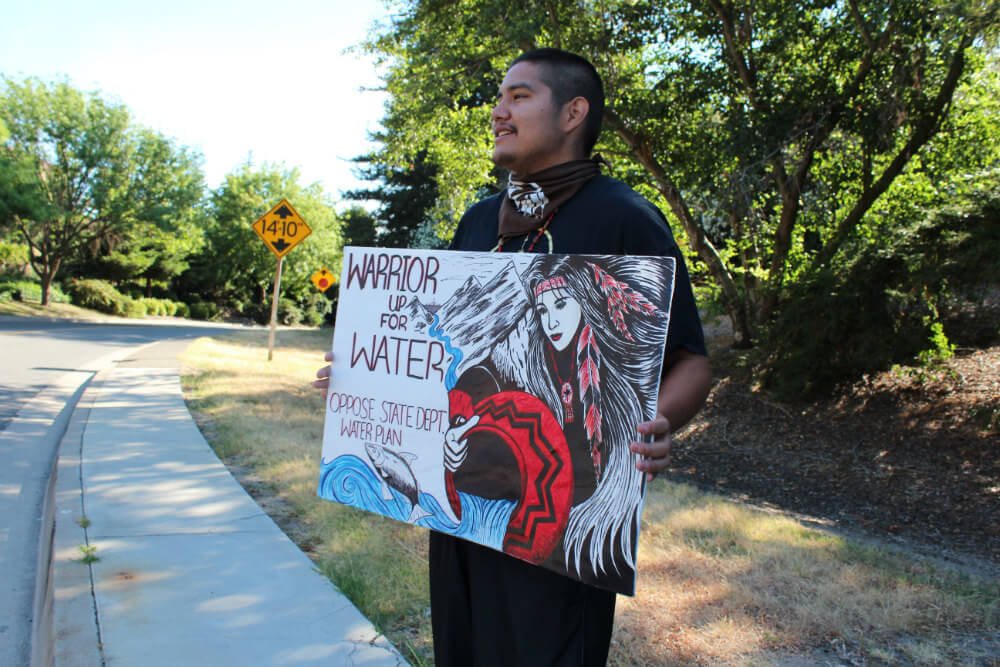 The corporate and water agency domination of the event was no surprise, when you consider that Big Money interests dumped $21,820,691 into the Prop. 1 campaign. There is no doubt that these wealthy corporate interests are expecting a big return for their “investment” in California’s play-to-pay politics system, including the construction of the twin tunnels and new dams.

The contributors were a who’s who of Big Money interests in California, including corporate agribusiness groups, billionaires, timber barons, Big Oil, the tobacco industry, corporate “environmental” NGOs including the Nature Conservancy, and the California Chamber of Commerce.

Rosa Rivera Furamoto, Nanea Young and Mikilani Young, Native Hawaiains, came from Los Angeles to emphasize the connections between the current direct action blockades to stop the construction of the Thirty Meter Telescope (TMT) on the sacred mountain of Mauna Kea in Hawaii and water struggles in California. 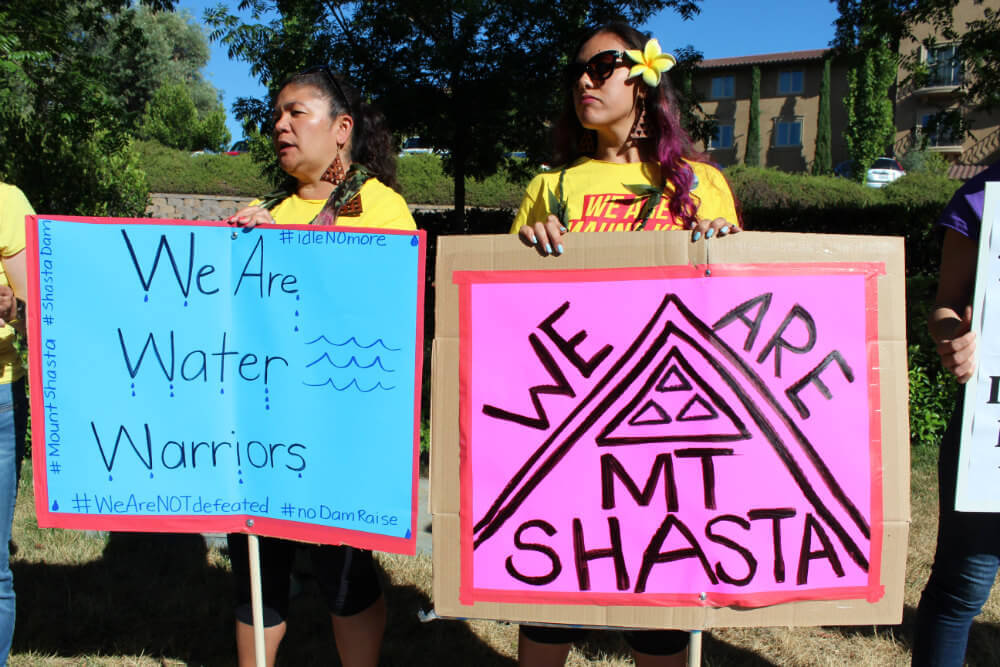 Native Hawaiian activists drew the connection between the federal plan to raise Shasta Dam and the plan build the Thirty Meter Telescope on sacred Mauna Kea in Hawaii. Photo by Dan Bacher

“From one mountain to another, we are trying to protect the sacred land,” said Mikilani Young. “We are taking a stand to say enough is enough. We came up from Los Angeles to stand with the native people of California.”

“As the sacred sites and salmon are threatened by the Shasta Dam raise, the proposed Thirty Meter Telescope (TMT) on Mauna Kea will sit upon a protected aquifer. Once they start digging into the ground to build the telescope, they will use hazardous chemicals that will impact the entire island,” said Young.

Ryan Camero, representing Restore the Delta and the Beehive Collective, also participated in the protest Tuesday to express solidarity with Tribes fighting their exclusion from California water discussions. “The tunnels and the Shasta Dam raise are part of the corporate takeover of our water by Big Oil and agribusiness,” said Camero. 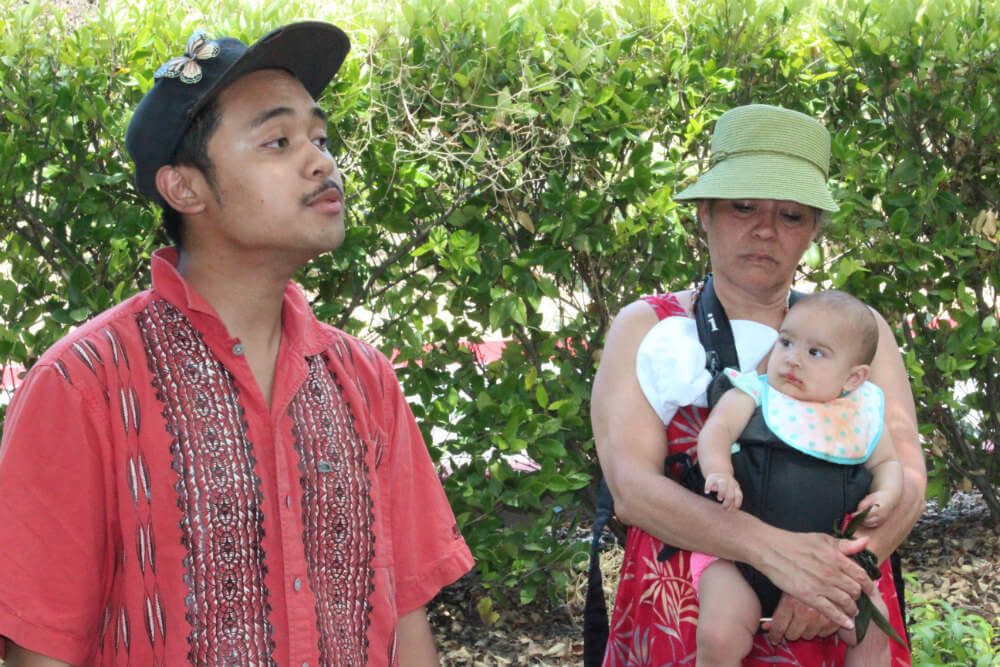 Ryan Camero of Restore the Delta and the Beehive Collective sings a song. Photo by Dan Bacher.

Though California is suffering through five years of drastically low rainfall, Chief Sisk said the water problems are all man-made, due to poor management and greed. As the low rainfall puts a stress on California’s boondoggle of a water system, it has never been more important for the indigenous perspective to be heard and for tribal water rights to be acknowledged and upheld, according to Sisk.

She said the Winnemem Wintu have an especially important stake in the bond funds, as many think they could be used to support the Shasta Dam raise to enlarge Shasta Lake’s capacity, which in turn would flood or damage about 40 sacred sites vital to the Winnemem’s religion and cultural practices.

“This is a summit that is meant to help these people peddle Brown’s projects that will benefit his buddies: agribusiness and water sellers in Southern California,” Sisk said. “They are not interested in what’s best for the people of California and their children.” 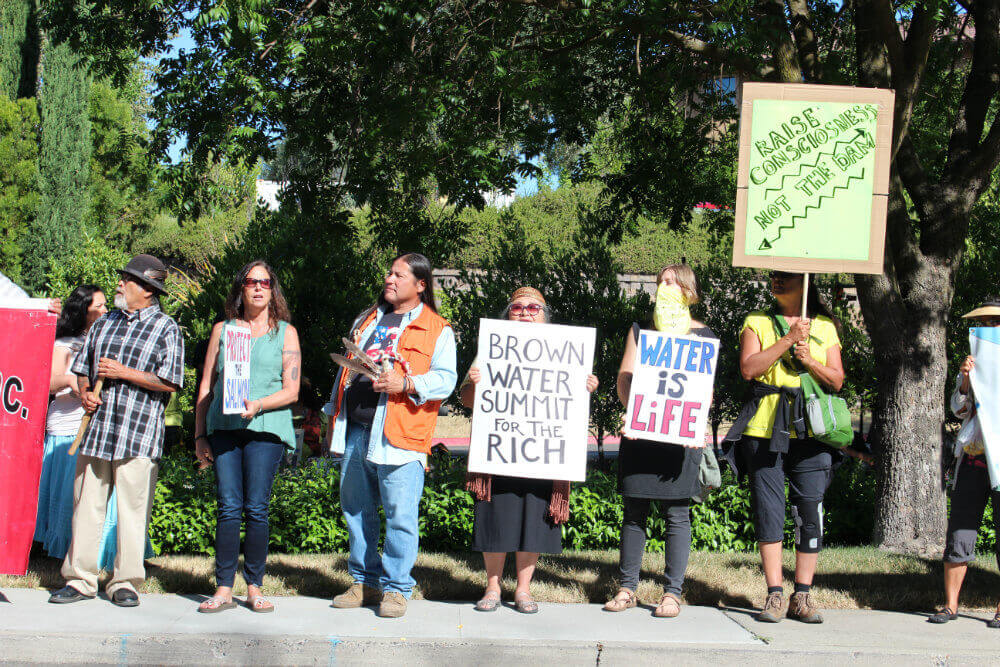 Raise Consciousness, Not The Dam! Photo by Dan Bacher.

Michael Preston of the Winnemem Wintu said he tried to get into the meeting, but was told by the organizers that it would cost $1500 for just one day! “I didn’t think it was worth it to spend $1500 for one day,” he said.

On Tuesday, protesters also marched up to the hotel and back to the sidewalk to challenge the destructive water infrastructure projects being planned at the California Water Summit.

After the protest on Tuesday, people gathered in front of the hotel to pray, sing songs and talk about the opposing the corporate water grab by Big Ag, Big Oil and other corporate interests.

“I think we accomplished our major goal to let people know that we want to be involved in water discussions, but are being excluded by the Governor’s staff at the California Water Summit now. We need water for salmon – and Tribes are first in time and first in rights for water,” concluded Sisk.

Governor Jerry Brown’s exclusion of Tribes, along with his exclusion of fishermen, Delta residents, grassroots environmentalists and public trust advocates from water discussions, is part of a larger pattern of the administration’s environmentally unjust policies that the mainstream media and most “alternative” media refuse to report about.

While the media and corporate “environmental” NGOs gush about Brown’s cynical grandstanding about “green energy” and pollution trading at carefully staged photo opportunities, Brown has in fact continued and expanded the worst policies of the Schwarzenegger administration.

Brown has fast-tracked the Bay Delta Conservation Plan (BDCP) to build the twin tunnels; has implemented questionable “marine protected areas” under the privately-funded Marine Life Protection Act (MLPA) Initiative; has presided over record water exports and fish kills at the Delta pumps; has put Delta smelt, winter run Chinook and other imperiled species on the scaffold of extinction; and has presided over the expansion of fracking, an extreme oil extraction technique, in California.

Brown is without a doubt the worst Governor for fish, water and the environment in recent California history, as I have documented in article after article. For more information, read http://www.indybay.org/newsitems/2015/04/15/18771135.php”>my investigative piece about Brown’s war on the environment.