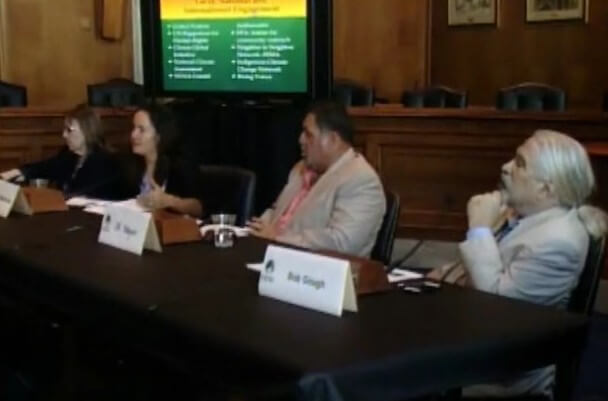 What If the Water Can’t be Stopped?

Tribal Resilience Plans in an Age of Sea Level Rise
Support our journalism. Become a Patron!

The Environmental and Energy Study Institute (EESI) held a briefing during Earth Week examining the impacts of sea level rise and oil and gas extraction on Native American communities. Across the United States, in Alaska, the Mississippi delta, the Northern Plains and the Great Lakes, land degradation presents challenges to indigenous peoples’ homes and livelihoods. As many Native American communities contemplate their potential displacement, one tribe is already preparing to move – the Isle de Jean Charles Band of Biloxi-Chitimacha-Choctaw Indians, who make their home in southern Louisiana. Our speakers discussed the tribe’s ambitious strategy to become one of the first coastal indigenous groups to relocate as a community in modern times, and why they feel it is necessary.

Experiences such as the Isle de Jean Charles Tribe’s inspired the White House to convene a State, Local and Tribal Leaders Task Force on Climate Preparedness and Resilience, which met from 2013 to 2014. Last November, the Task Force published a report of 35 recommendations on how the federal government can assist local climate resilience efforts. This briefing examined some of the recommendations from tribal communities, such as encouraging the incorporation of climate resilience into land use development and management practices.

The Isle de Jean Charles Tribe, which has made its home for 170 years on the Isle de Jean Charles in the bayous of southern Louisiana, has seen decades of oil and gas extraction operations, restrictive levees, and salt water intrusion from sea level rise severely diminish the freshwater marsh around its island. The dwindling marsh can no longer protect the island from ocean tides, which will eventually destroy it. Chief Albert Naquin is leading the Isle de Jean Charles Tribe as they preserve their community and culture by moving together to a new home. The tribe’s vision for their new community will emphasize agricultural sustainability, healthy living, and pride in the culture and tribal identity of the group.

The briefing included a 10-minute screening of Can’t Stop the Water, a short film examining the struggle and optimism of the Isle de Jean Charles Tribe. The tribe hopes its story and innovative relocation plan can serve as a model for other tribal communities facing displacement due to land loss.