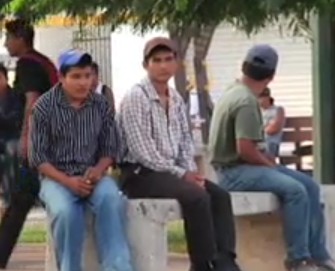 Where Are The Maya?

Where Are The Maya? exposes the uncomfortable truth about the tourist Meccas of Cancún and Playa del Carmen in Mexico’s Yucatan peninsula.

The Narco News School of Authentic Journalism presents Where Are The Maya? a new 15-minute documentary film that strikes at the heart of Mexico’s tourism industry.

Filmed over the course of eleven days in February 2010, the documentary exposes the shamefully-commonplace exploitation of the original peoples of Mexico’s Yucatan peninsula: the Maya.

Day in and day out, the two city centres “exploit the name and the descendants of that beautiful historic peninsula whose indigenous peoples, monuments and cultures have awed the world time and time again,” says Al Giordano, founder of the School of Authentic Journalism, only “to be left in the dirt, to fend for themselves against greedy men, companies and governments of brutal, violent Power.”

And where are the Maya?

Some are forced to live in work camps, where they have no access to basic rights, let alone bathrooms. As described in the film, theyare trucked out like cattle each day and brought back each night.

Other Maya’s have built communities for themselves, but they live in constant struggle against pompous land barons and vigilantes that want them out.

And others still must wander the streets where they are not welcome.

Meanwhile, the tourists are everywhere, seeking a piece of authentic Maya Culture, beholding ancient structures built with unmatched precision, and celebrating in the lap of luxury far away from real life.