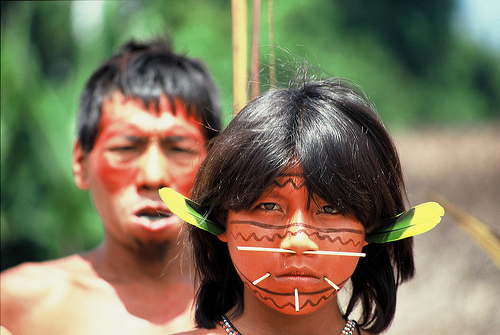 The Guatemala government announced this month that it will suspend Goldcorp’s Marlin mine in San Miguel Ixtahuacan to make way for a full investigation of the health, environmental, and human rights impacts of the controversial mine project. The Inter-American Commission on Human Rights (IACHR) ordered the suspension on May 21, about two months after the International Labor Organization (ILO) made the same request to conduct their own investigation.

The NGO Nunavummiut Makitagunarningit (NM, “Nunavummiut can rise up”) called for a public inquiry to decide whether or not to open up Nunavut to uranium mining. So far the government has failed to release any detailed information on the dangers of mining the radioactive metal. NM believes–and rightly so–that it poses serious risks to the environment, to public health and safety, and to the traditions and practices of the Inuit people.

The US 9th Circuit Court ruled against the Te-Moak Tribe of the Western Shoshone, reversing its previous ruling in 2009 that ordered Barrick Gold to halt their expansion of the Cortez Hills mine project. In the recent ruling, the Court also issued a disturbing claim that the BLM fulfilled its duty to consult the Shoshone, stating that it was enough for them to simply “try” to contact the Shoshone by sending a couple letters and speaking to an answering machine.

The provincial government of Palawan in the Phillippines froze the mining applications of several companies, following a protest by six hundred indigenous people and farmers on June 7. The protesters called on the government to stop the companies from pursuing mining operations in Palawan, which is a UNESCO World Biosphere Reserve. The protesters also expressed anger that a Canadian mining company is gaining footing in the region.

The Indonesian military and para-military police (BRIMOB) forces launched a violent operation against Papuan Tribal Peoples in the central highlands region of West Papua. “During similar military operations in the past, soldiers and police have killed Papuan villagers, raped women and children as young as three and destroyed the tribes’ homes, churches, vegetable gardens and pigs,” notes Survival International.

The US 10th Circuit of Appeals ruled that allotted lands in the “checkerboard area” of the Navajo is somehow not within the jurisdiction of the Navajo Nation. “The effects?” asks Nellis Kennedy from Honor the Earth. “Uranium Resources, Inc., parent company to Hydro Resources, Inc. may now begin in situ leaching for uranium near Church Rock, NM.”

The Canadian government is getting ready to dispose of the Barriere Lake Algonquin’s traditional governance system, using a rarely invoked piece of the Indian Act known as Section 74. The last time Canada invoked Section 74 was in 1924, when the colony state unilaterally deposed the Haudenosaunee government and placed a padlock on the Confederacy lodge.

Several tourism agencies in the Andaman Islands were exposed for endangering the Jarawa Indigenous People who are on the verge of extinction. According to Survival International, at least eight companies have been promoting the chance to see or meet a ‘real life’ Jarawa in their tourism packages. Such encounters could prove fatal to the Jarawa, who’s population is dwindling at about 240.

A Canadian Member of Parliament introduced a private member’s bill to stop Canada’s lakes from being turned into toxic mine waste dump sites. More that a dozen lakes have already been marked for “re-classification” thanks to a loophole in the federal Fisheries Act. A number of the lakes are located on Indigenous territories.

The state of Alabama finally passed a law to protect Indigenous burial and ceremonial sites. The law closes a loophole that previously allowed private land owners to knowingly disturb burial grounds or funerary objects on their land. The law has been welcomed by Indigenous People, though, some have pointed out that it’s “too little too late” for the sacred mound behind the Oxford Exchange. A violation of the new law is punishable by up to 10 years in prison and a $15,000 fine.

The vhaVenda People are attempting to defend one of their sacred sites from being utterly destroyed for the tourism industry in South Africa’s Limpopo Province. In April, bulldozers entered the forest area surrounding the site, the Phiphidi waterfall, to pave the way for so-called tourist huts. With eyes locked on the World Cup, the bulldozers continue to destroy this sacred site.

Innu communities are blocking access to two mining projects in northeastern Quebec and western Labrador in an effort to protect their Indigenous rights and ensure that no mining can proceed on their territory without their consent. As of mid-June, roughly 100 Innu were attending the blockade.

Indigenous Peoples in the Xingu River Basin have said that the Brazilian Government, via the state-owned company Eletronorte, is blackmailing them into withdrawing their opposition to Belo Monte Hydro Dam. They said officials have threatened to remove their access to FUNAI’s health care program, among other benefits legislated by law, if they continued to oppose Belo Monte.

Chickaloon Village held a protest against the proposed Wishbone Hill coal project near Palmer, Alaska. The company behind the project wants to place the mine beside Moose Creek, which is vital to the Athabascan community’s culture and religious beliefs.

The Mohawk Council of Kanesatake categorically rejected Niocan Inc.’s proposed mining project on their traditional territory. The company wants to mine Niobium, a metal used in just about everything from gas pipelines to rocket engines, MRI scanners and jewelry. The Mohawk Council says they have not been approached for consultation or offered their consent. They are also opposed to the many health and environmental hazards the mine could create.

The paramilitary group UBISORT once again blocked a humanitarian aid caravan from reaching the Indigenous Triqui community of San Juan Copala in Oaxaca, Mexico. More than 400 people accompanied the caravan, including 20 federal MPs. The Oaxaca government is being blamed for failing to provide the caravan with military support’ and for continuing to fail the Triqui People, who are unable to access fresh supplies of water and food.

Roughly 10,000 peasants gathered for a massive march in Central Haiti to protest what some have called “the next earthquake for Haiti” – a gift of 475 tons of hybrid corn seeds and vegetable seeds by the US-based agribusiness giant Monsanto, in partnership with USAID. “While this move comes at a time of dire need in Haiti, many feel it will undermine rather than bolster the country’s food security,” says the Brooklyn Food Coalition.

The investigative group Verdad Abierta highlighted a disturbing pattern of forced child recruitment in Colombia. Quoting the National Indigenous Organization of Colombia, Verdad Abierta said between 450 and 500 indigenous children have been forcefully recruited by the paramilitary groups FARC and the ELN. According to their report, the government is not doing enough to address this ongoing crisis.

Police in Odisha, India attacked an indigenous community that was trying to prevent the destruction of their homes to make way for a new steelworks project run by TATA, the same company that owns Jaguar, Land Rover, Corus and Tetley. At least nine people were injured.

Without any warning or consultation, the government of Papua New Guinea (PNG) introduced emergency legislation that dissolved the Constitutional rights of all landowners in PNG, including the right of Indigenous People to own land, challenge resource projects in court and receive any form of compensation for environmental damage. If that’s not bad enough, they have also banned all reporting and public discussion of these decisions. Take action here.

In the first week of June, more than a thousand people gathered at the Fountain Indian Reserve near Lillooet, British Columbia. they were attending the second of four International Indigenous Leadership Gatherings. the final gathering will take place in 2012.

The Invisible History of Slavery in Canada – A feature-length documentary by independent filmmaker Mike Barber. The film, which is currently in production, examines the legacy of slavery in Canada and how this historical narrative has been kept out of Canadian classrooms, textbooks and social consciousness.