What’s it going to take before Canada starts acting with integrity?

Since the #IdleNoMore (INM) movement began in early November, in a humble effort to inform communities about the Harper government’s anti-native agenda, Indigenous Peoples and allies have carried out more than 200 different actions across the globe including 17 blockades, and dozens upon dozens of Round Dance flash mobs. There are also at least two ongoing hunger strikes that started in Solidarity with INM led by Chief Theresa Spence of the Attawapiskat First Nation and Emil Bell, a 72-year old man from Canoe Lake First Nation in what is now the Province of Ontario.

More actions are being organized every single day. In fact, #IdleNoMore is now generating such an incredible amount of momentum that it’s almost impossible not be drawn into it, no matter where you are in the world.

It begs a simple question: what’s it going to take before Canada stops pretending that nothing’s happening and starts obeying the demands of the People?

The answer is just as straightforward: it doesn’t really matter, because #IdleNoMore is just as much about healing and rejuvenation as it is about reconciliation and resistance: turning back the tide of Canadian colonialism.

More to the point, I think we know that a single meeting can’t really change anything. So, whatever happens in the next few weeks, #IdleNoMore must remain vigilant. 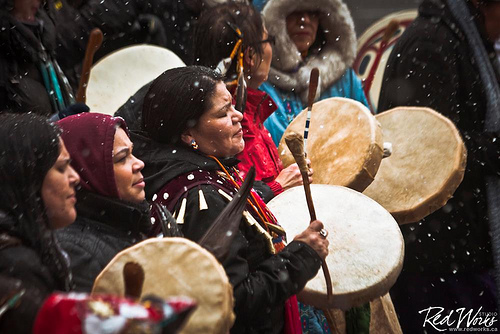 Photo by The Indigenous Environmental Network

Even if Canada sits down with ‘leadership’ and that meeting results in something worthwhile– like an agreement to implement the recommendations that came out of the Royal Commission on Aboriginal Peoples and, as an initial act of good faith, a moratorium on all the Bills and Acts in question–our work as the first and last line of the defense of our Nations, will not end.

It will be up to us to make sure Canada honors its word.

This will sound pretty cynical but, if you know Canada’s history, than you know it also happens to be true: If Canada can dissolve #IdleNoMore with a few quick words and deeds, there’s a strong chance it will say and do anything to get us to sit back down.

With #IdleNoMore gone, there will be nothing to stop the Harper government from starting the attack all over again.

Who knows if we’d be able to generate this kind of momentum again. We don’t need to find out, anyways. We have that momentum right now.

It’s also worth reminding ourselves that we need more than for Canada to start acting with integrity. We also need to strengthen our own communities and Nations. The path to peace and friendship–and decolonization–after all, is a two way street.

However, this is for the long-term. Right now, we just have to keep doing what we’re doing.