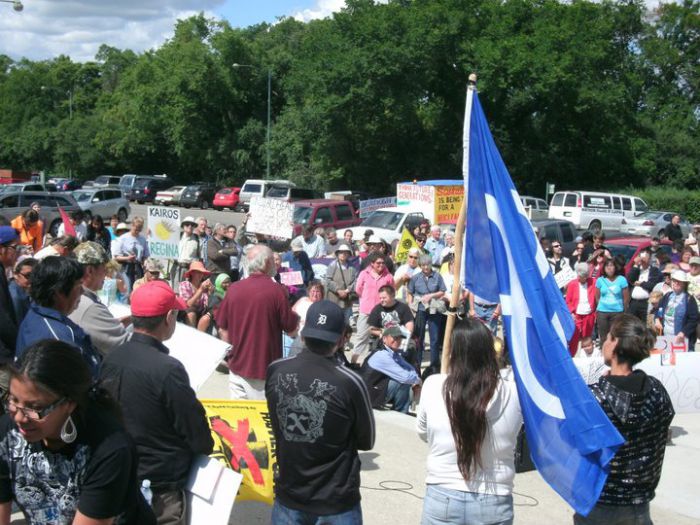 Victory over nuclear waste in Saskatchewan

Two Indigenous communities from northern Saskatchewan have finally been dropped from the selection process for a nuclear waste disposal site. One of them, Pinehouse, is a mostly Métis community on the shore of Pinehouse Lake. The other one, English River First Nation, is a Dene community to the northwest of Pinehouse. After several years of grassroots resistance spearheaded by the Committee for Future Generations and supported by other organizations, it was announced on Nov. 21 that both communities were unsuitable for further study.

The nuclear site selection process is being conducted by the Nuclear Waste Management Organization (NWMO), an organization created by the Canadian government in 2002 specifically to address the problem of nuclear waste disposal in Canada. A typical example of the backwards kind of thinking at the heart of the corporate, finance-oriented modern world, NWMO came into existence many years after nuclear power plants were established in Ontario, Québec and New Brunswick with the realization that something had to be done with the waste. Scrambling for a solution at the expense of other people, Pinehouse and English River First Nation were just two of the communities on NWMO’s list of potential sites, which originally included a total of twenty-one. The list is now down to seventeen, four of which have moved on to the next stage in the selection process.

The struggle to save these two Saskatchewan communities from becoming a toxic waste dump has been well documented on the Committee for Future Generations website, in a short documentary film and even (if you read between the lines) in the final pages of two assessment reports published last October by the NWMO. This isn’t an easy victory. Community resistance and activists’ efforts had to overcome the nuclear industry’s lobbying and the NWMO’s move to push their own agenda.

Another hurdle was a lack of transparency on the part of the NWMO, evident not just in their relationship with the Committee for Future Generations, but also in their own assessment reports. These reports consistently pointed to potential negative consequences for the environment, the economic well-being of the communities, their traditional activities and their spiritual health as a people, yet the NWMO dismissed all of this as not being significant. Opposition to the project was described on page 44 of the Pinehouse assessment report as

a high level of misinformation about the APM Project in surrounding First Nations/communities. A vocal minority opposition may be masking quiet neutrality or support in the surrounding area.

This statement was echoed in the English River First Nation assessment report.

Difficult as the fight has been, this is an important victory. By keeping Pinehouse and English River First Nation safe from nuclear waste, the people in these communities have protected their own health and that of their environment. They have made sure the next generations can go on hunting and fishing like their elders have done before them. Just as importantly, they have helped preserve the beauty and the spirit of their homeland, and in turn those of the planet.

No one could say it better than the Committee for Future Generations themselves:

We are one of the few places left in the world where we can still go out onto the land and water for moose, berries, medicinal plants and fish. A nuclear accident or leak would contaminate our lands and waters forever. Traditional Indigenous wisdom teaches us to think ahead to the next seven generations, but in the case of nuclear waste, we must think ahead 7000 generations.

For the rest of us human people who do not live in Saskatchewan, there is hope to be found in what Pinehouse and English River First Nation have achieved. Nuclear waste is a global problem, and there are many other places at risk or already suffering. Perhaps the people in those places can look at what these two Canadian communities have done, and learn from it. More importantly, these two communities remind us that it can be done. It may take time and a lot of work, but people can make a stand against powerful interests and actually prevail. It’s with local victories such as this one, apparently small but in truth very big, that we can make the world a better place for all of us.