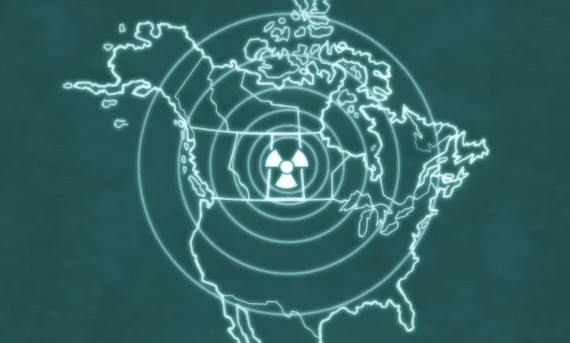 “The Saskatchewan government is trying to impose a nuclear project on a community and a province that doesn’t want it. They’re turning a blind eye to election irregularities, physical intimidation and psychological abuse in northern communities to allow NWMO to find a site for Eastern Canada’s high-level radioactive waste.” -Pat McNamara

SASKATCHEWAN: TOXIC WASTE DUMP? is a 47-minute educational documentary film by Myek O’Shea that looks at the various agencies involved in colonial waste management in Canada. This low-budget independent film takes viewers to the front-line of the back end of the nuclear industry.

This story begins in 2009 when the Nuclear Waste Management Organization comes to Regina SK to share their agenda of disposing eastern Canada’s highly radioactive nuclear waste in the prairies.

One of the communities that has expressed interest in ‘learning more’ is the northern village of Pinehouse. But what kind of learning are they receiving?

The film takes viewers to the remote northern community of Pinehouse to better understand this nuclear ‘consultation’ that is taking place. The film is an investigation into the larger social justice question regarding the ‘Duty to Consult’.

The film includes interviews with the NWMO, CLC, Sask Party, CNSC, and various representatives from communities in the north.