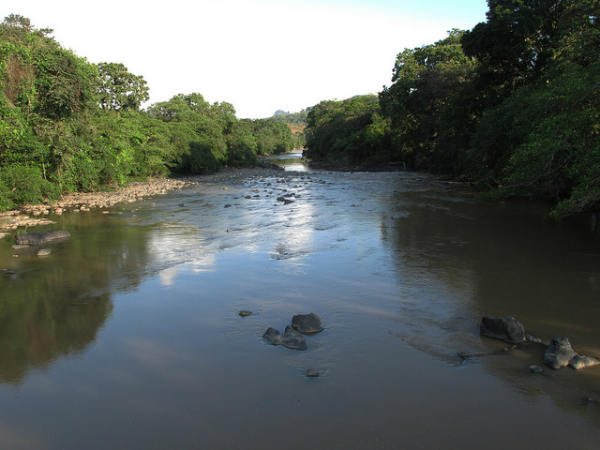 Urge Development Banks To Walk Away From Barro Blanco Dam

The Rio Tasabara is one of Panama's longest and most beautiful rivers. Scores of communities rely on it for potable water and fishing. Photo by Richard Arghiris
Support our journalism. Become a Patron!

Indigenous Peoples and conservationists are asking three public development banks to divest from and deny any future financial assistance for the contested Barro Blanco hydroelectric dam on the Tabasara river in the Panamanian province of Chiriqui.

As noted by Rainforest Rescue, the German DEG, the Dutch FMO and the Central American BCIE have already granted the project some 20 million Euros, covering approx. 20 per cent of the hydro dam’s construction costs.

Construction of the Barro Blanco dam commenced in March 2011 without any prior consent or official consultation with any affected communities.

If completed, the Barro Blanco dam would flood annexed communal lands belonging to the Ngobe-Buglé, in violation of Panama’s constitution as well as Law 10 which declares that their land is inalienable. Furthermore, it would displace thousands of people and impact thousands more who rely on the Tabasara river for potable water and fishing.

It would also destroy large areas of primary forest, including the unique habitat of the endangered Tabasará rain-frog. Numerous other species (PDF) would also be negatively impacted.

Rainforest Rescue has initiated a letter writing campaign on their website directed at DEG (Deutsche Investitions-und Entwicklungsgesellschaft GmbH). Please head over to their website to send that letter.

Alternatively, you can send all three development banks a direct email either using Rainforest Rescue’s sample letter or by writing a message of your own

the German DEG, alongside the Dutch FMO and the Central American BCIE, is financing plans for a hydroelectric power station called Barro Blanco in Panama, having granted almost 20 million euros.

In order to produce 29 megawatt, a 55 metres tall dam is planned to be built in the course of the Tabasara river. This would lead to the banking-up of the river for miles and would cause the flooding of 1.6 square miles of rainforest and cultivated land.

The inhabitants and especially the Ngobe natives have been fighting against a hydroelectric power station on their land for decades. Time and again, the construction of Barro Blanco could not be put into effect due to the resistance of the people.

But now the military police is using brute force to oppress the protests of the people. At least two were killed, numerous are missing, dozens of people were injured and arrested – this is the sad summary of a police operation this February.

The DEG is referring to environmental and social studies, signed contracts and the laws of this Central American state. However, violence and shots fired at indigenous people who are struggling for survival are not compatible with basic and human rights.

The cited studies are highly superficial and loaded with imprecision and mistakes. For example, the environmental review states that the endangered animals are able to migrate to other areas. However, the extremely endangered blue Tabasara Rain Frog is not even mentioned in the study. In addition, even more contracts have already been signed for the construction of further hydroelectric power stations downstream.

The problems mentioned above are well documented and summarized in the television report “Panama: village of the damned”:
http://www.aljazeera.com/programmes/peopleandpower/2012/03/20123208464402131.html

Being involved with Barro Blanco, the DEG is also jeopardizing the previous success of development cooperation with the Ngobe.

Therefore, the bank should withdraw its support for the Barro Blanco hydroelectric power station project immediately and should refrain from granting further financial support.