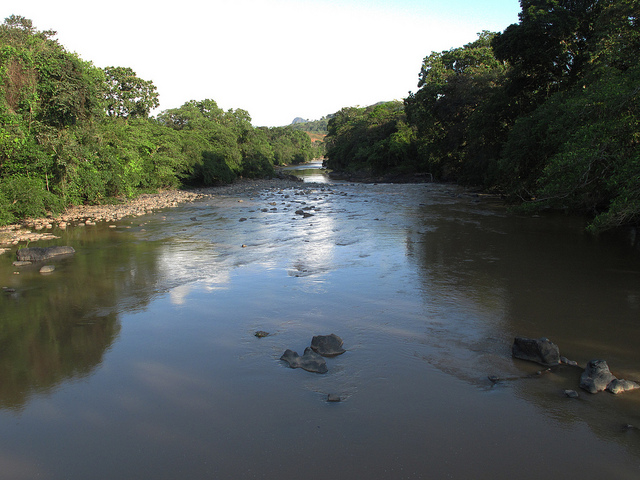 The Rio Tasabara is one of Panama's longest and most beautiful rivers. Scores of communities rely on it for potable water and fishing. Photo by Richard Arghiris.
Support our journalism. Become a Patron!

On May 6, 2011, the grassroots indigenous and environmental group known as The 10th April Movement (El Movimiento 10 de Abril, or “M10”) shut down a section of the Panamerican highway at the bridge over the Rio Tasabará in Western Panama.

M10, which represents several communities along the banks of the Rio Tasabará, occupied the bridge around 12:00pm and announced that they would remain there until the Federal government responded to their concerns over the Barro Blanco hydroelectric project and other developments in the province of Chiriqui.

The more than 500-strong group says the Barro Blanco dam will displace thousands of local inhabitants and impact thousands more who rely on the river for potable water and fishing.

The group claims that the affected communities were never properly consulted about the project. They also say the environmental impact study for the dam contains falsified information; and that the hydro company behind the dam, Genisa (Generadora del Istmo S.A.), has acted to intimidate local land-owners.

Most importantly, the Barro Blanco dam is set to flood annexed communal lands belonging to the Ngobe-Buglé. However, M10 says it would be a violation of Panama’s constitution as well as Law 10 which declares that their land is inalienable. It further contradicts President Martinelli’s assurances earlier this year that Comarca lands would be fully protected against adverse mining and hydro concessions.

The project will destroy large areas of primary forest as well, including the unique habitat of the endangered Tabasará rain-frog. Several species of fish that are important to the Ngobe-Buglé people would also be effected.

Since the end of March, the grassroots movement, which formed spontaneously during other anti-hydro protests starting 10th April 1999 (hence the name M10 Movement), has been camped outside the project site, successfully blocking additional machinery and bringing work to a stand-still. 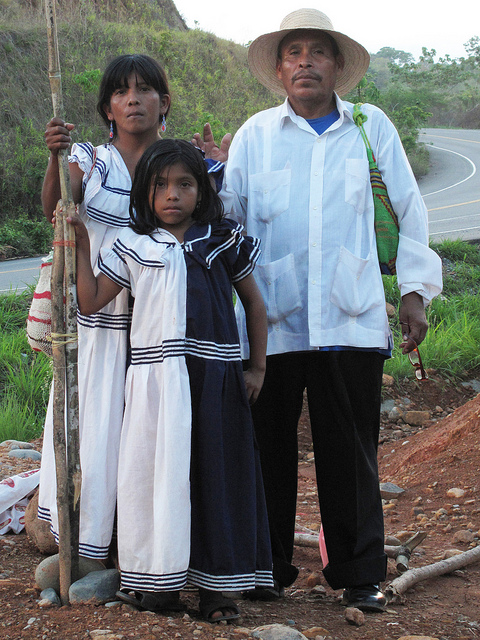 The Ngobe have never given their consent to the Barro Blanco Dam project. Photo by Richard Arghiris.

Last month, a tripartite commission (1 part government, 1 part Genisa, 1 part M10) was formed to discuss the project and a possible end to the protests. However, on May 3rd, during a somewhat theatrical meeting in Tolé, chaired by vice-minister of work and labour development, Luis Carles, dialogue broke down. At that point, M10 refused to continue negotiations whilst the mayor of Tolé threatened to evict them from the encampment.

In a distasteful twist, Barro Blanco applied for Carbon Credit awards the following day, May 4th. It is one of many such projects in Panama that are seeking such rewards from the cap and trade system.

Diggers and other heavy machinery were also pulled from the project site on May 4th. M10 feared this was a precautionary measure to protect the equipment against sabotage and that the state was preparing for an imminent and heavy-handed eviction.

An all-night vigil began that same night, with children being kept at a safe distance from the protest camp. Quietly, M10 hoped for the support of Ngobe in other parts of the Comarca and solidarity from the international community. Several days earlier, a request for immediate intervention was sent to the UN Special Rapporteur on the Rights of Indigenous Peoples, James Anaya.

Ultimately, however, M10 decided that their best course of action was a blockade. Reporting on the events of the day, Guidebook writer and journalist Richard Arghiris, who was attending the protest, states: “There was a small police presence throughout the day with riot squads arriving towards 5pm. The squads sneaked into strategic positions on the hillside and among the trees whilst the Ngobe gathered rocks and readied sling-shots. Children were taken from the highway to a nearby house and I was also asked to keep my distance,” said Arghiris.

Fortunately, the situation didn’t escalate much further beyond that–though, it easily could have, given how the police have handled other Ngobe protests in the past. Arghiris continues, “At the final hour a priest intervened to mediate between the protesters and the police and a violent confrontation was [averted]. The Interamericana was opened at 5.45 with an agreement to fresh dialogue tomorrow, Saturday 7th May.”

However, Arghiris said that M10 has promised more blockades if talks break down again.