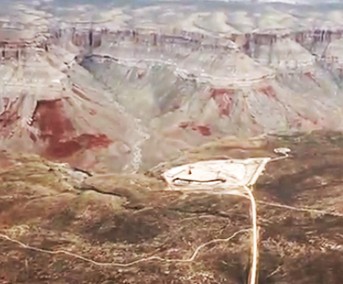 This aptly-named short film profiles the new rush to extract uranium from Havasupai lands and elsewhere around the Grand Canyon National Park.

When the U.S. government announced its 20-year withdrawal of nearly one million acres of public land from uranium mining at the Grand Canyon, people across the United States breathed a much-needed sigh of relief. With more than 5,000 uranium claims staked within the area, the future of the Grand Canyon was beginning to look grim.

However, there is a misconception about what the withdrawal really means. Due to a lack of trustworthy communication–and a little wishful thinking–many people have been led to believe that the withdrawal established a full moratorium on uranium exploitation/development. That is just not the case. The government still allows companies to develop uranium mines on existing claims that it deems “valid”.

Currently, there are approx. 3,500 valid claims within the withdrawal area. There are also a total of 11 mines on the table, including the Arizona 1 mine, The Kanab mine, The Canyon mine and The Pinenut mine. A Canadian mining company, Denison Mines Corp., owns all four mines.

These mining operations are moving forward under outdated environmental and cultural impact studies that were originally approved in the 1980s.

Both the Interior Department and the Forest Service have the authority to demand updated reviews, but they have so far refused to do so.